Seth: It seems like we have been here before. Well, maybe we haven’t been here before, the offense completely fell flat against Iowa State and the defense played relatively well.

I’ve got a few questions for you.

1. What’s wrong with the offense?

2. Would you replace Nic Shimonek?

3. Are you ready to move on to a new head coach or are you riding this thing out until the season ends?

Travis: 1. I’ve been saying all year that I think the toughest part about this season is that Kingsbury can’t really decide how he wants this to play out. He’s trying to be a more run oriented, ball control type of coach to help the defense out, but it’s almost as if the pendulum had swung too far and he’s too conservative at critical times. I know Iowa State was dropping back a ton of guys into coverage, so that’s why they were so run heavy in the first half, but I think you still have to find a way to test the secondary. I don’t know man, it’s just all so frustrating.

2. I don’t know if replacing him is really an option. I mean I guess you could try with Carter, but I don’t think he adds any additional dimensions that we haven’t seen with Nic. It probably wouldn’t hurt to shake things up a bit, but I think ultimately this season will go as far as Nic can take it.

3. It seems like everyone I know is ready to move on, but I guess I’m just indifferent, at best. More than anything I’m just sad about it. I really want Kliff to be a successful coach because I know how much it means to him and how much work he puts into it. But at some point it comes down to on-field performance, and he’s not shown that yet. He’s got 5 more games and I’ll definitely be rooting for him and the team to surprise us.

Travis: So my boys’ dreams finally came true on Saturday when they got to dress like KISS and show off at a Halloween party we went to. It was so much fun watching how excited they were and it’s hilarious how into it they get. The best part was when I told them the official KISS twitter account liked their tweet. They’re pretty convinced that Gene Simmons and the boys marveled at their get up. 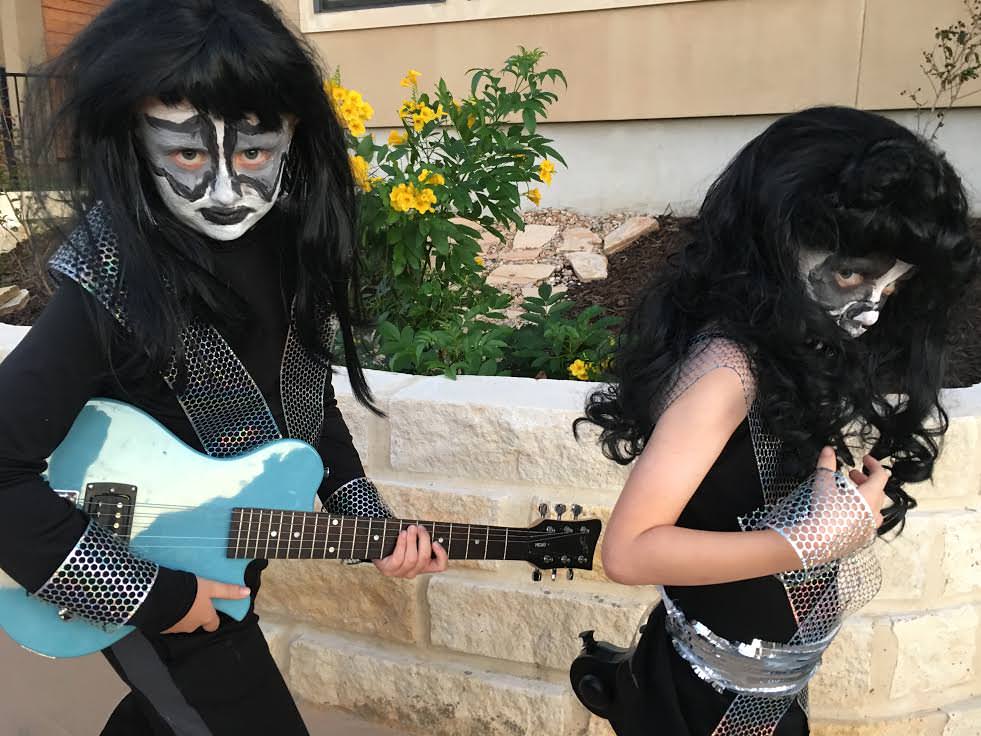 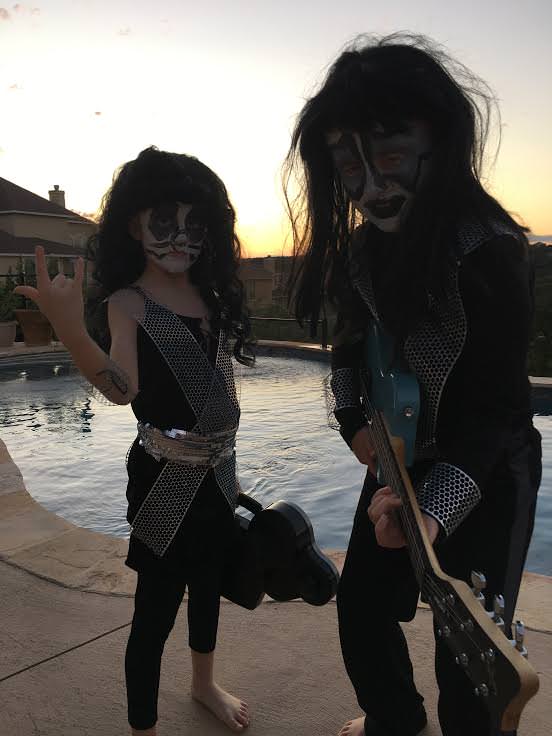 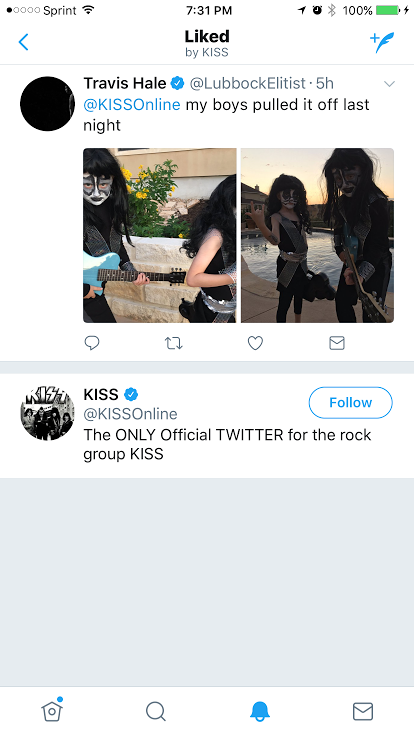 This time of year is just a fun time to be a parent because the kids have so much going on. What are you guys planning for the big candy stampede?

Seth: When I saw your kids in their costumes, I thought they looked awesome. They had on homemade costumes and that was one of the best parts of Halloween, which is how in the heck are you going to make a Han Solo costume from the stuff you have around the house?

I seems like Halloween is going to last for a few days. Saturday will be a bit crazy because Yoyo is finally going to become a citizen and that happens on Saturday at noon in Irving. We’ve got a soccer game in K-town at 10, so we’re going to have to haul tail to get to Irving. At this citizenship ceremony at the US Citizenship and Immigration Services in Irving, there are supposed to be candy stations for all of the kids under 14. As an aside, the US Citizenship and Immigration Services office in Dallas is the most sterile indoor environment that I’ve ever seen. Every wall is white. There is very little or no decoration. It’s one huge room and I’ll be interested to see if the Irving office is even slightly decorated.

Then on Tuesday night, we’re heading to Terrell to a friends house to essentially do Halloween there. In both Terrell and Kaufman, there is one main street that almost every kid in town goes to in order to trick-or-treat. So it can be completely chaotic, but since we’ll be at a house on the street where this happens, I think it will be a good time. I think they’re going to have a projector for movies and we’ll go around the neighborhood and do the trick or treating thing.

Travis: My wife is pretty handy with that stuff, so if I asked for a Han Solo costume you can bet she’d come up with one. All I had to do was get her some pics of the band and she took it from there.

And Superman and Lego Batman are solid choices.

Seth: This is the last time we get to see our buddy Baker Mayfield ply his craft against Texas Tech. The Oklahoma offense is absolutely clicking, they’ve been darn near perfect and it’s all because of how good Mayfield has been. Without Mayfield, I think OU has a very average offense, at best. Any thoughts on Mayfield’s last dance?

Travis: With Mayfield, more than anything, I’m just ready to see him go. Of course there is a bit of personal animosity toward him, from almost all Tech fans. But I think what makes it worse is the constant slobbering love-fest he gets every week from the guys calling the games. He is a spectacular QB and makes a ton of plays, but he’s also the same guy that’s made a ton of mistakes, and lost his starting job at Tech as a result. So more than anything, I’ll just be glad when it’s all over.

Travis: My best thing this week is the vivid seats app that you can download on your phone. When we went to Lubbock a few weeks ago we didn’t have any tickets in advance. On Saturday morning I downloaded the app and was able to purchase tickets and have them immediately available for download. The $13 fee was a bit much, but the convenience made up for it. It wasn’t that long ago that you had to buy tix on eBay at least a week in advance in order to have time for the seller to mail them to you. The advances in technology, particularly as they relate to our phones, amazes me.

Seth: My best thing ever is the Tiny Desk Concert from Chance the Rapper. Be advised, there is a language warning, but if you’ve never listened to Chance, he’s supremely talented. Oh, and I know what you might be thinking, “A rapper? No thanks!” This Tiny Desk Concert is more of a jazz/rap mix a bit.

One of the things that he did was write a poem from his hotel to the NPR offices and it was quite good:

“I still have all the keys that are of no use to me,” he began. “They used to, though. On the other side was a mansion on a hill, complete with L.A. pools and fireplaces and a rim made specifically for people that lie about being six feet to dunk on.”

I can’t write poetry, my mind doesn’t work that way, but I’ve always enjoyed reading it and that’s pretty impressive to write something that you want to share with the world on the way to a Tiny Desk Concert.

With Halloween nigh upon us, it’s time we rank our top five Halloween candy.

Travis: My kids are asking about my candy rank all the time, so I’ve got this down:

Seth:It’s a tough one to see how Texas Tech can win this game. I suppose anything could happen and I think nothing would make Texas Tech fans happier than to see Mayfield throw 3 picks, but that’s not likely to happen. The line is around 20, but I am just not confident that this team can keep it that close. I’m predicting something in the realm of Texas Tech 21, Oklahoma 48. Don’t ask me how we get those 3 extra points.

Travis: I think I’m retiring from the prediction game because I haven’t been close this year. But I will leave you with this last prognostication:
One of four things will happen on Saturday. Tech will lose big, lose close, win close, or win big. I think, in that order.