The Red Raiders beat an old SWC foe by 20. 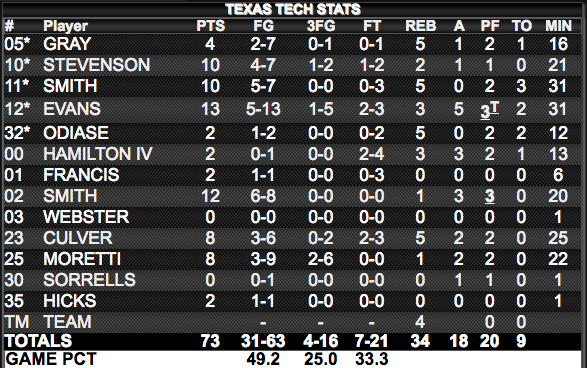 I wasn’t in Lubbock, so I didn’t get to see the game. I followed along as best I could online and would love it if you guys could help out and fill in any blanks.

Player of the Game: Let’s go with Zach Smith, finished in double-figures this game with 10 points on 5 of 7 from the floor, which is something that hasn’t happened all that much this year to go along with 5 rebounds, a block and a steal.

High Flyer of the Game: Just on watching what we have in terms of highlights, it appeared to be the Zhaire Smith and Keenan Evans show.

Defender of the Game: Tough to tell without seeing the game, but when you have 6 steals, you’re probably going to get defender of the game and that’s what Jarrett Culver did. That’s just stupid and probably soem sort of record.

Multi-Purpose Player of the Game: Let’s go with Culver again, who finished with 8 points, 5 rebounds, 2 assists, 0 turnovers, 2 blocks and 6 steals.