The Red Raiders host the Bears.

Welcome to yet another season of Texas Tech baseball. If you haven’t read all of Michael LaBarre’s positional previews and predictions, then correct that situation immediately. The rise of Texas Tech baseball has been absolutely incredible to watch and the leader at the helm has been Tim Tadlock, the former player who talks with a noticeable twang and is always cautioning his team and anyone else who will listen that you have to respect the game at any and all opportunities.

As far as me trying to act like a baseball expert at this point would mean that I would have studied all other Big 12 teams and know them intimately, but we’ve been having too much fun with basketball. What I can write is that the baseball experts all expect Texas Tech to be pretty good. The two best baseball publications, Baseball America and D1Baseball, and they both think that Texas Tech has a top 5 team, #5 for Baseball America and #3 for D1Baseball.

The funny thing about all of this is that if this baseball season goes as expected and the basketball season continues to run it’s course, then you, as a Red Raider, will have had a helluva lot more good days than bad. From the middle of November through possibly sometime in June, could be a lot of fun. Enjoy the ride. Have fun with this.

A-J Sports’ Carlos Silva, Jr. talks with pitcher Dylan Dusek, who thinks that this is a talented team:

The Red Raiders have plenty of talent in the starting rotation, which is one aspect Dusek feels confident about heading into the season.

“It’s definitely the most talented team,” Dusek said when asked of his thoughts on his current squad. “We have a lot of really good hitters. And I really believe we have a pitching staff that isn’t supposed to really be on a college baseball team with the amount of guys that throw over 93, 94 miles an hour. That’s really ridiculous. … We all know we have to work hard. We’ll just have to see what happens.”

Juniors Davis Martin and Steven Gingery are the likely candidates to be the No. 1 and No. 2 starter, respectively. Ryan Shetter, a crafty right-handed hurler, should slot into the third spot in the rotation with a healthy mix of other hurlers ready to compete for starts and innings. 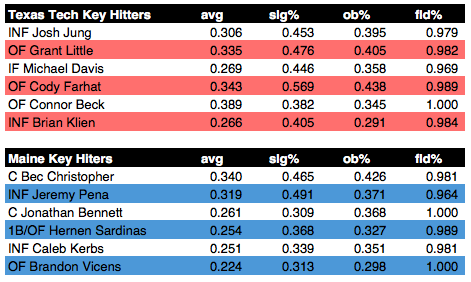 Davis Martin got the start, got the win and pitched well after being out for most of last year. Martin finished 5 innings, allowing 3 hits, 1 run, walking 2 and striking out 4, wile throwing 47 of 78 for strikes. Caleb Kilian came in and pitched 2 relatively clean frames, allowing just 1 hit and no runs. Ryan Shetter had some issues in his lone inning of work, where he walked two and had the bases loaded in the 8th inning, but was saved by a tremendous diving catch by Cody Farhat that would have assuredly allowed a couple more runs than the 1 that he actually allowed. Sophomore Dane Haveman pitched the 9th and earned the save. Haveman is a sophomore that played at Hill College last year and he walked 1 and struck out 2 in his inning of work.

The offense got going in the third inning, starting out with John McMillon getting hit by a pitch, then Greg Holt doubled in his first at bat, sending McMillon to third. Cody Farhat singled through the left side scoring McMillon and Holt. Josh Jung singled, moving Farhat to second and up next, Greg Little doubled to right field scoring Farhat. Josh Jung homered in the 5th inning for the 4th and final runo f the game.

The story of the game is that Steven Gingery went out in the third inning, after just breezing through 7 batters, striking out 3 of them, he was pulled with an injury in the area of his elbow, which is a real concern for this team. Dylan Dusek came in and pitched the next 2.2 innings, earning the win, but giving up 3 hits, 1 run, striking out 2 and walking none. Ty Harpenau was really good after Dusek, going 3 innings, not allowing a run, walking 2 and striking out 3. Freshman Nick Candelari from Spring, Texas, pitched the final frame, allowing, no runs a walk and a strikeout.

Offensively, Texas Tech jumped out to a 3-0 lead in the second inning behind a Grant Little double that scored Clay Koelzer and then Connor Beck granded into a double play that ended up scoring Little and then a Cody Farhat triple scored Michael Davis. The Red Raiders would end up with 13 hits on the day and they were led by Grant Little going 3-3, with 2 RBI. Josh Jung was 2-5 with 2 RBI, off of a 2 run homerun scoring Brian Klein.

A couple of interesting notes is that freshman Gabe Holt started at DH and at the top of the lineup with KC Simonich from Illinois, subbing in the 9th inning and singling to score 2. Brian Klein got the start at 2nd base. Clay Koelzer got the start at catcher and went 2-4 after not starting on Friday night.

Big John McMillon got the start and went 5 innings, supposedly throwing 94 on his last pitch. McMillon allowed just 1 run, 2 hits, walking 4 and striking out 7. Richard Gilbert from San Antonio, Texas, got the ball and struggled a bit, going 1.2 innings, allowing 2 runs, 3 hits, walked 4 and struck out 3. Freshman Kurt Wilson (he’s a pitcher and an infielder too), from Arlington, Texas, got the ball next, getting out of the 7th inning, allowing just 1 run, a hit, walking 1 and striking out 1. Sophomore John Henry Gonzalez pitched the final frame allowing just 2 hits, walking none and striking out 2.

the story of the game here is that Texas Tech hit 4 home runs in the 1st inning.

Before today, the Red Raiders had never hit four homers in a single inning. That changed today. Here are the four dingers for your viewing pleasure. #WreckEm pic.twitter.com/s2pCBHGDiI

Goodnight. The Red Raiders would end up scoring 9 runs in the first and it was pretty much over at that point. Gabe Holt went 3-4 with 2 runs scored and 2 RBI. Greg Littel went 2-4, scoring 2 and with 3 RBI.

Braxton Fulford, a freshman from Lubbock, got the start at catcher and went 1-2. I think Cameron Warren has pretty much gotten the start at 1st base so far. Connor Beck has started at right thus far and Josh Jung has been the guy at 3rd for 3 games.

Geez, sorta tough to comprehend 21 runs, 9 of them scored in the 2nd inning and then Texas Tech allowed 6 right back in the 3rd inning, but Texas Tech would tack on two multi-run innings in the 6th with 3 runs and the 7th with 6 runs. It should also be noted that Cameron Warren was hit by pitch 4 different times and had a hit in his only at bat that allowed him to actually hit the ball, so his OBP was 1.00 for the day. Erikson Lanning got the start and it was a bit rough, going only 2.2 innings, allowing 5 hits, 6 runs, 4 earned, walking 2 and striking out 2. The bullpen was lights out though, collectively they would allow no additional runs and 1 hit the rest of the way, while walking out 3 and striking out 6. Jose Quezada got Lanning out of the 3rd inning and would go on to pitch 2.1 innings, Caleb Freeman pitched 2 innings, a sophomore from Abilene, while Ryan Sublette, a freshman from Illinois, and Connor Queen, a sophomore from Odessa College, finished out the final 2 frames, going an inning each.

Gabe Holt and Josh Jung have been killing the ball, Holt went 3-5 with 4 RBI (including a triple that he ended up scoring on with an error on the throw to third), while Jung went 4-5 with 5 RBI and a 3-run home run, sending it to the moon via left field.