UTSA is 2-1 on the year, having won a series with San Francisco last weekend. They had a game with Abilene Christian on Tuesday that was cancelled, probably due to weather. The Roadrunners lost the first game 11-2, but then went on some scoring runs, clobbering the Dons 11-1 and 13-5. UTSA does have some guys that are absolutely knocking the cover off of the ball, Chase Keng, Ryan Stacy and Bryan Arias have all hit the ball really well.

I should note that the Friday night game says that it is going to be televised and the link is here. I have no idea if this is a free broadcast, but just letting you know.

A-J Media’s Don Williams has a notebook of items, and discsses how Texas Tech also leads the NCAA in hit by pitch by a wide margin, 22 with the next closes 16, but head coach Tim Tadlock doesn’t think any of it is intentional. Also addressed is how Tadlock sees the starter situation playing out:

“That’s kind of what we’ve talked about,” Tadlock said, “and believe me, we talk about it. We try to figure out if we can get better, just like you do offensively, just like you do in anything. But right now, that’s where we are.”

UTSA has their official preview with a look back at how they performed last weekend:

Junior outfielder Ryan Stacy led the offensive charge with a .500 batting average (4 for 8) with two doubles and a pair of RBIs. Freshman outfielder Chase Keng registered a team-best five hits during the weekend, including three on opening night. The Deer Park native had one double, a triple and three stolen bases.

UTSA’s pitching staff limited San Francisco to a .219 batting average during the weekend. Senior left-hander Steven Dressler hurled 6.2 scoreless innings to pick up the win in game two, while junior righty Derek Craft worked 4.2 scoreless stanzas out of the bullpen in the finale to earn a victory. 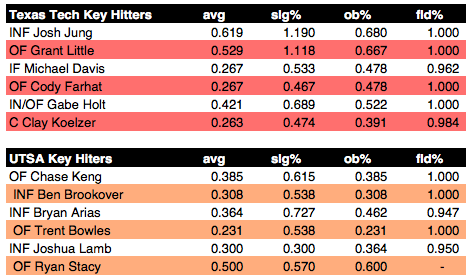 Nice to get a shut-out in a game that was supposed to be a double-header ended up just being one game on Saturday night at 8:00 p.m. I’d imagine that they ended up waiting all day long to play two games and only playing one. The offense scored 3 runs in the 3rd inning, a Cody Farhat walk and a Cody Holt single both ended up scoring off of a Brian Klien single to center field. Grant Little comes up next and singles to left, scoring Kurt Wilson who had also walked earlier making the score 3-0. In the 7th inning, Farhat opened up getting hit by a pitch and Holt reached on an error for a fielder’s choice, advancing Farhat to second. A Wilson single scored Holt and Farhat for the last two runs for Texas Tech for the game.

Martin Davis (2-0) got the start and the win, but was limited with his pitch count, only 66 pitches in 5 innings, allowing 3 hits, no walks and striking out 5. I’d imagine that they were probably wanting to keep things managed considering he’s the Friday night starter going on Saturday night, he’s already a day behind. Caleb Kilian pitched the 6th and 7th innings, allowing just a hit, while striking out 3 and Jose Quezada went the final 2 frames, allowing no hits and striking out 1. As a group, the three pitchers allowed just 4 hits all game, didn’t walk a batter and struck out 9. That’s pretty good work right there.

Apparently, the next game will be starting at 3:00 today rather than at 1:00.

Wanna know how to win games? Don’t let the other team score. That’s the second shut-out against UTSA and third shut-out in the last 3 games. John McMillon went 6 innings, allowing just 3 hits, 3 walks, and striking out 6 while throwing just 70 pitches. Ty harpenau pitched the 7th and 8th inning without a hit, 1 walk and 2 strikeouts, while Caleb Freeman earned his first save of the year by pitching a clean 9th inning. That’s 7 total hits for UTSA over the past 2 games.

Freshman Kurt Wilson went 2 for 4 for the day with 2 RBI, in the 5th inning that scored Gabe Holt and Cody Farhat. Speaking of Farhat, he went 1-3 with a walk, but singled home Cameron Warren in the 2nd inning. Freshman Gabe Holt went 3-4 on the day and that’s all the Red Raiders needed.

Head coach Tim Tadlock always says that you have to separate balls from strikes and well, the Texas Tech batters were walked 13 times and they were hit by a pitch 3 times, that’s 16 free passes through the game and kind of incredible if you think about it. The team only had 7 hits on the day, but they haul off and score 10 runs. Gabe Holt went 1-3 with 2 RBI and 3 walks and Grant Little went 2-4 with an RBI and 2 walks. In some possibly encouraging news, John McMillon went 1-3 but also had 2 walks. I think he was sort of a guy that hit it over the moon or struck out, so good to see him have some plate patience.

The most discouraging thing was the fact that Sunday starter Erikson Lanning couldn’t make it out of the third inning, only going 2.2, allowing 2 hits, and walking 2 while striking out 1. Connor Queen (1-0) picked up the win and I think inherited some runners and was tagged for some runs, as he went 2.1 innings, allowing 2 hits and a walk. Ryan Sublette, the freshman from Illinois, struggled in his 1 inning of work, giving up 3 hits, 2 walk, 4 runs, but he did strike out 3. Conor Kilian pitched a flawless 7th and Dane Haveman picked up his 2nd save and also pitched a perfect 8th and 9th inning.