What do some of the advanced stats say about Texas Tech.

Now, that Texas Tech has made the NCAA Tournament, I thought it would be interesting to take a look at how Texas Tech fares in some of the analytics and what some of the advanced stats say about Texas Tech. Before we get to those stats, I wanted to link to the Selection Committee’s rankings, via CBS Sports where they ranked every team 1-68 and they had Texas Tech as the 12 seed, the very last #3 seed of the group. Texas Tech’s first round opponent Stephen F. Austin is #58. 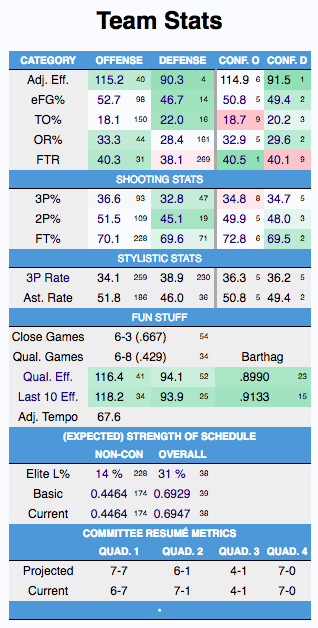 FiveThirtyEight has their Tournament projections and they have Texas Tech with an 89% chance to win that first round game, but only a 54% chance to advanced against the 6th seed Florida Gators. In their preview of the tournament, they say to be wary of betting on Texas Tech:

Don’t Bet On: No. 3 seed Texas Tech. The Red Raiders are a fine team that plays some of the nation’s stingiest defense, but they’ll probably have to make it through an unusually strong six-seed (Florida) in the Round of 32 just for the right to face Purdue (or possibly Butler). Our model only sees a 6 percent Final Four chance for Texas Tech, easily the worst mark for any three-seed.

Eric Haslam at Haslametrics had Texas Tech as the 21st best team overall and SFA as the 107th best team. Haslam’s all-play estimates (i.e. game predictor) has Texas Tech winning 76.58 to 63.49 over the Lumberjacks and if we look forward to a match-up with Florida, his numbers predict a loss, 66.70 to 67.58.

A new site that I’ve run across is run by a guy named BartTorvik and he had Texas Tech as the #13 team overall and his numbers figure a 87% chance of beating SFA, 76-63. there are a couple of other neat features, which is teams with similar resumes to Texas Tech, the 2011 Louisville squad (lost in the first round), the 2012 Indiana team made the Sweet 16, as did the 2008 Washington State, the 2015 Oklahoma team, and the 2012 Wisconsin team. And then there are teams with similar profiles to Texas Tech. The 2014 Connecticut team that won the title is the closes to Texas Tech and the 2013 Michigan State and 2008 Stanford teams both made the rounds of 16.