This is certainly an interesting game. Arizona lost a road game to the Flingin’ Rainbow Warriors with head coach Nick Rolovich and then absolutely whipped the Northern Arizona. It was something like 51-13 in the first half of the Northern Arizona game and against Hawaii, Tate was a yard short of possibly changing the outcome of the game on a bananas last second play where Tate almost made it to the end zone. Literally a yard short.

The offensive coordinator is former Texas A&M offensive coordinator Noel Mazzone and the defensive coordinator is also the former Aggie coach, Marcel Yates. Mazzone is the former UCLA coordinator and that’s pretty much where he made his mark. Interesting, Mazzone also worked quite a bit with Tommy Tuberville, from 1994-1998 at Mississippi and also for 3 years in Auburn. Mazzone has somewhat seen it all in his 30 years of coaching and he’s similar to Daid Yost in that he wants to run plays fast and likes the RPO aspect of having a quarterback make some choices, so the idea of Khalil Tate and him running that system makes perfect sense. The thing is though that Tate didn’t really run the ball, that’s not his thing, but maybe it should be his thing.

Marcel Yates is in his third year as the defensive coordinator and Yates was associated with Boise State for a really long time, from 2003 through 2011, and that was his Alma mater. Yates then moved to Texas A&M for a year and then back to Boise for a year and to Arizona in 2016. Arizona runs a 4-2-5 with your spur and bandit positions, which are similar to the spur and raider positions for Texas Tech.

Jalen Harris (6-5/25) and Colin Schooler (6-1/229) are the only two players that have any sacks, so there’s not a lot of pressure. A bunch of guys have just pass broken up, and Christian Young (6-2/217) has the team’s only two forced fumbles. Statistically, Arizona is 123rd in total defense and 126th in scoring defense. A few more items to think about, Arizona allows 6.78 yards per play, which is 122nd in the nation. That’s not a ton of data, but the results are not good thus far.

These are your position ratings for the UTEP game. Mostly good I think. I’m considering just going with 1 through 5 as this might be a bit easier to read. We’ll see how this goes this week, but I think 1-5 is probably a better visualization. 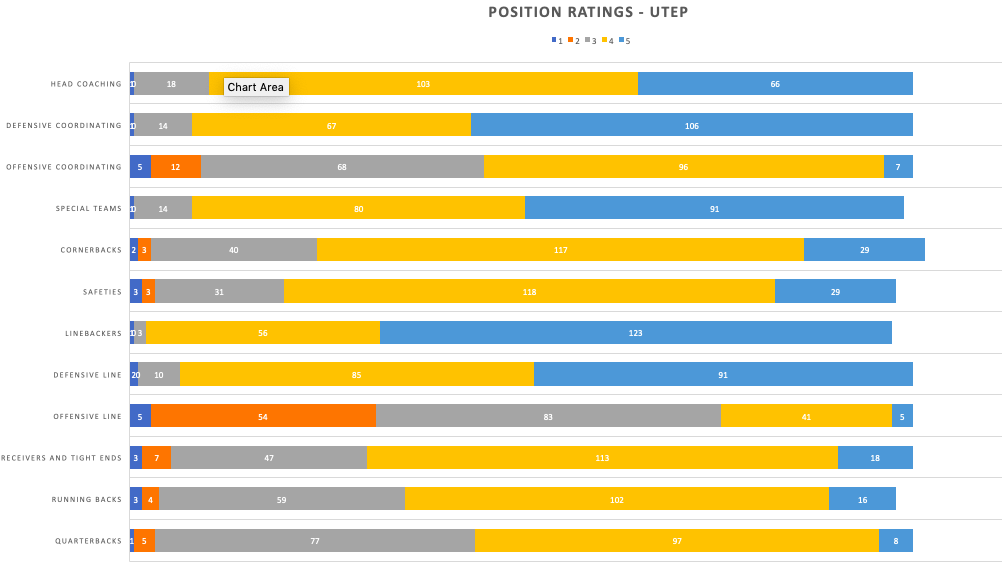