Getting Over the Hump. I don’t have a ton of time this morning, but via Winispedia, this series has flipped and flopped a bit in recent years, Tommy Tubberville was absolutely dominated his first 2 games against Iowa State and Paul Rhoads (52-38 and 41-7).

Then Texas Tech went on a 4-game winning streak, with close wins the first 3 years and a 66-31 win in what I think was Rhoads final year in Ames. Since then, Iowa State has won the past 3 games and has the largest margin of victory, 56 points, a 66-10 win over Texas Tech, which marks the year that head coach Matt Campbell was hired for the Cyclones.

It’s time to flip the script or something like that.

Every time I do this chart, I pray that I haven’t made at least 5 mistakes. I think this is accurate and with so many byes last week, there wasn’t a ton of action on the field. I think the Iowa State vs. West Virginia game was close in the first half, but Iowa State really pulled away. Oklahoma always seemed like they were in control of what I saw of that game, Texas would come back, but Oklahoma always seemed to assert themselves.

This week everyone is in action, Texas will most likely get back on track against Kansas and I tend to think that Baylor might get wholloped on the road against Oklahoma State. That’s not necessarily a comment about either program, but more of a comment about being on the road and playing at home and having a bye week. Oklahoma gets West Virginia at home and 33.5 seems like a lot of points. I also expect Kansas State to beat TCU in the battle of the puples. 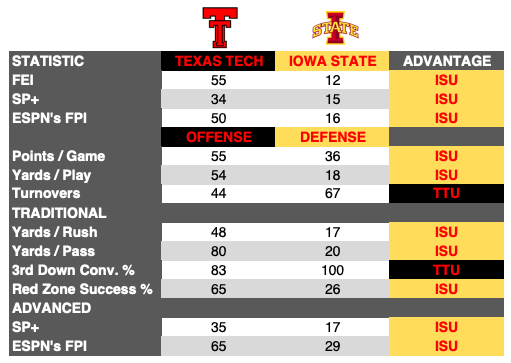 The Iowa State defense is stout up front, starting with Ray Lima (6-3/305) who is really good and I would expect plays in the NFL next year. But Lima has almost no stats, so don’t expect him to pop in the stat line, but he only has 13 tackles on the year and 1.5 sacks. Defensive tackle Jamahl Johnson (6-0/30) is along side Lima (8 tackles), while defensive ends Zach Peterson (6-4/262) and Enyi Uwazurike (6-6/285) set the edge. Peterson has 23 tackles and 1 sack, while Uwazurike has 12 tackles and .5 sacks. That’s some pretty significant size on the line and if you’re wondering how Iowa State is so good against the run, it starts with these guys. Not big stats, but highly effective. The linebackers are strongside Mike Rose (6-3/240), which is huge for a Big 12 linebacker and he’s only a sophomore, with O’Rien Vance (6-1/231) at the middle and Marcel Spears (6-1/218) at the weakside. Spears and Rose are the leaders here, Spears has 43 and Rose has 41 tackles, but it is Vance as the guy that absolutely gets after the quarterback. Vance has 6.5 sacks, which by far leads the way for the Cyclones. Spears has 1.5 sacks and Rose has 1 sack on the year.

Iowa State utilizes a “star” safety, which is probably like a bandit, linebacker/safety and Greg Eisworth (6-0/205) fills that role with Lawrence White (6-0/196) filling the free safety spot, and Braxton Lewis (5-11/190) the strong safety. White and Eisworth are the stat-stuffers, White has 40 tackles, 1 interception, and 4 passes defended, and Eisworth has 39 tackles with 3 passes defended.

At cornerback, Anthony Johnson (6-0/186) and Datrone Young (5-9/176) are the main cornerbacks. Surprisingly, Johnson is second on the team with 2 sacks so he will come on the corner blitz I’m guessing.

I’d also add that this is 12 starters, which is not allowed, but I’m guessing that Iowa State will start 11 of the 12, probably depending on the offense that they are facing.

Statistically, Iowa State is so stingy on defense, especially running the ball, they just don’t allow a ton of running yards, but were Iowa State isn’t as efficient is allowing teams to complete 63% of their passes, but is 19th in yards per pass attempt, so lots of stuff over the middle, but nothing deep.

Of course, the hope is that the improved play of T.J. Vasher and RJ Turner can take advantage of some smaller cornerbacks, or maybe cornerbacks that just aren’t as big. Of course, Iowa State has maybe not played teams that are really slinging the ball just yet, so Baylor is probably the one team that passes the ball with efficiency and they passed for 307 yards, but it took 45 attempts, so short passes. But TCU, West Virginia, and Iowa are not exactly offensively efficient teams right now, so there’s also the possibility that the stats are a bit skewed.

I’d also add that Iowa State is terrible on third downs, 99th in the nation and that’s probably what killed Iowa State against the Hawkeyes as they allowed 10 of 19, but have allowed 43% of third down conversions. The key for the offense will need to not get into long down and distance situations because I think that the offense really had to make some plays last week, I’d love to see the team make it easy on themselves.

FN 1. John Heacock is the defensive coordinator and by all accounts, he’s fantastic, not afraid of change and he’s not afraid of getting out of his comfort zone. Supposedly at some point, Heacock threw out his playbook before playing Texas and started playing a 3-3-5 defense because that’s who the team’s best defensive players were.

When Iowa State Has The Ball 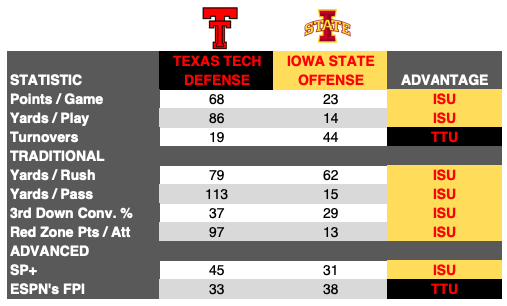 The skill positions for Iowa State start with quarterback Brock Purdy (6-1/210) (FN. 1) who is as dual-threat as the come and there’s been no sophomore slump with Purdy. Purdy is a modern day quarterback who can do it all, he’s highly efficient, and he is incredibly difficult to stop because he’s always a threat to run and the coaches have given him the green light to essentially do that as a sophomore. Personally, I think he’s the 2nd best quarterback in the Big 12, behind Jalen Hurts. Over 300 yards passing and 70% completion percentage with 9 yards an attempt with nearly 200 yards rushing would be incredible for most quarterbacks. I mentioned that running back Breece Hall (6-1/205) received most of the carries last week, but he’s not listed as one of the co-starters. Sheldon Croney, Jr. (5-11/206), Johnnie Lang (5-8/193), and Kene Nwangwu (6-1/205) are all listed as those co-starters, but I’d put my money on Hall getting most of the snaps. Iowa State will occasionally utilize a fullback/tight end that’s just a blocking tight end and that’s Dylan Soehner (6-7/270) and Ben Latusek (6-3/248). Two of the running backs, Hall and Lang, essentially average 4.5 to 5 yards a run and each have 3 touchdowns. Probably very solid running backs because that’s what Iowa State does.

One of the best part of the offense for Iowa State is their utilization of the tight end, Charlie Kolar (6-6/252) and Chase Allen (6-7/245) are listed as the co-starters and they’re both pretty terrific weapons. Kolar has 23 catches for 319 yards and 2 touchdowns, while Allen has 7 for 64. That’s double-figures for yards per catch essentially so these guys aren’t just safety valves.

At receiver, La’Michael Pettway (6-2/223) is the big receiver that gets most of the looks, while Deshaunte Jones (5-10/180) is your inside receiver with Tarique Milton (5-10/183) being your speed outside receiver. Jones is the leading receiver by far, 37 catches for 444 yards and is averaging 12 yards a catch. Milton is the down-the-field threat, averaging 22 yards a catch on 19 catches, while Petteway has 21 catches for 254 yards, 12 yards a catch, and leads the team with 3 touchdowns.

If you want to neutralize the Iowa State offense you have to neutralize Purdy, in 6 contests this year, Purdy averages a QB rating of 173 in wins and 140 in losses, and that was more pronounced as a true freshman, 185 in wins last year and 119 in wins. In losses, Purdy just doesn’t get the ball in the end zone, only 3 touchdown passes compared to 8 touchdowns in wins. Not only that, but Purdy also averages 10 yards a pass in wins, and 8 in losses.

The other big distinction is that Iowa State doesn’t run the ball nearly as well in losses, only 23 carries and 77 yards when they lose, while they absolutely go off, 41 carries and 197 yards in wins, with 13 touchdowns in wins and 1 in losses.

Statistically, I don’t think that there’s a chance in Hades that Texas Tech wins this game. Iowa State has so many advantages in just about every statistical category. makes you think that turnovers will be absolutely key and the defensive performance, i.e stopping Purdy will also be critical. I think the Texas Tech offense has rebounded a bit and the offense is better than the numbers reflect after the Arizona and Oklahoma games, so there’s a bit of recovery there.

I think this game is pretty important in terms of trajectory of the program and will say a lot. I think a lot of the noise with the Big 12 and Kirby Hocutt isn’t affecting the team, there’s no reason that it should (FN. 1).

Let’s be solid running the ball and solid stopping the run and I think Texas Tech wins this game. Earlier in the week, LaBarre asked for my game prediction an I picked Baylor in a close game the week before (FN. 2) and I’ll take Texas Tech 33-30 to win in a close game. Yes, that score is ominous, but don’t even care.

FN. 1 I very much appreciate fans saying on social media, “LOL, Texas Tech is so focused on Baylor, shouldn’t they be focused on Iowa State?” Well, the actions of fans still being upset about a loss has absolutely nothing to do with the team’s focus, which neither you, nor I know what that is. LOL.