It’s a preview. The last football preview of the year.

What’s Next? If we’re trying to be positive, my ideal scenario is for Texas Tech to win this game, leaving the Longhorns battered and bruised as they head into the bowl game while the Texas Tech coaches are out recruiting their tails off at all of the junior colleges in Texas, Kansas and Mississippi (or wherever they are located). I think that the 2020 class for Texas Tech is at 17 or 18 and I’m guessing that they are going to carry a full class with 25 players and I’d have to guess that a large portion of the remaining class will be junior college players. I’d take high school players as well, but I think the defensive line, offensive line, and secondary all needs immediate help to an extent. I suppose that this could also include transfers, which I think Wells is going to participate heavily in while he’s at Texas Tech. So we may not really know how this class turns out until after we get to know who the transfers are.

Big 12 Boomerang. Things should pretty much play out and we’re left with a Big 12 Championship game between Oklahoma and Baylor (we’re actually guaranteed that no matter what happens this weekend I think). Oklahoma has the biggest challenge traveling to Stillwater, but the Pokes will be without Spencer Sanders and that could be problematic. 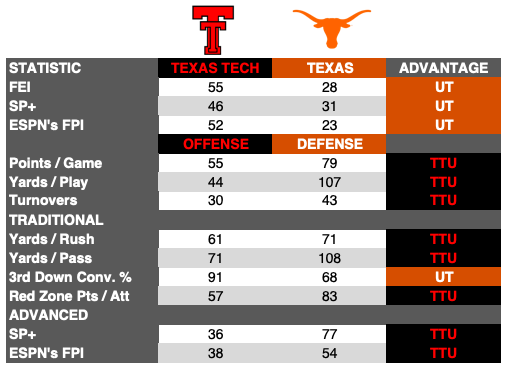 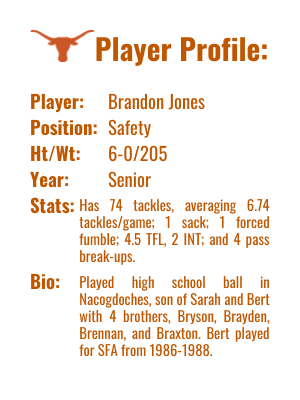 The three linebackers are Joseph Ossai (6-4/245) [which is essentially the size of a rushing defensive end] at the B-Backer spot, Juwan Mitchell (6-1/240) is the middle linebacker, while the rover is Ayodele Adeoye (6-1/250). Ossai is the leading tackler with 77 on the year, 2 sacks, and 7.5 tackles for a loss. Adeoye and Mitchell aren’t huge pass-rushing options, Adeoye has 2.5 sacks and Mitchell has 3. They have around 37 and 34 tackles respectively, so not a ton of tackles from either one of them.

FN 1. A Staking The Plains exclusive is that I always do these previews in searching for things on the other team in incognito mode because my browser and search history then thinks that I’m actually interested in these other teams.

FN 2. I was able to watch quite a bit of that Texas/Baylor game and I don’t think that I’ve seen a more disinterested and inept Texas team and I pray that they haven’t found religion between then and now because it doesn’t look good. 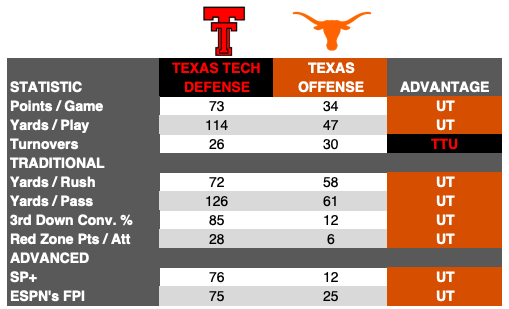 A controversial as he is, Sam Ehlinger (6-3/230) (on an annual basis, I tend to not pronounce his name properly) is the leader of the offense for the Longhorns. He’s essentially an one-man band, taking 409 pass attempts and 142 rushing attempts, which leads the team. That’s 551 touches (FN 1). Ehlinger is completing 65% of his passes for 3,114 yards, 7.6 yards per attempt, has 27 touchdowns to just 9 interceptions. He’s been sacked 31 times, which may be an indication of the line and a quarterback that tries to do too much. 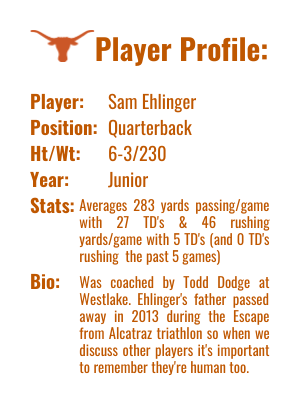 At running back, it is also a M.A.S.H. unit because Keontay Ingram (6-0/220) is the starter, but the back-up is back-up quarterback Roschon Johnson (6-2/220). I think it’s silly that Texas has back-up quarterbacks that are 220 because I don’t think that Alan Bowman or Jett Duffey sniff 200 pounds, which doesn’t mean anything, that’s just huge for that size. In any event, Ingram has 728 yards, on 5.6 yards per attempt, with 6 touchdowns. Jonson has 495 yards, averaging 5.3 yards an attempt and 4 touchdowns.

FN. 1 Compare that to Oklahoma’s Jalen Hurts, who has 269 passing attempts and 180 rushing attempts for 449 touches. Oklahoma State head coach Mike Gundy said this week that Oklahoma is a one-man show and that is obviously true of Oklahoma, but it is even more true of Texas. As Ehlinger goes, so goes Texas.

My unbridled optimism and losing streak will probably continue, but don’t even care. Texas is fairly beat-up, and I think that Matt Wells has them close to a win and it’s basically Thanksgiving, which means that anything can happen. Maybe that’s Christmas. I don’t know. Texas Tech 35, Texas 28. I have no real reason for picking that score, but that 10 point spread seems like it is way too much.