Let’s get to know Liz Cope!

The number of people who help make up an athletic team and an athletic department is pretty staggering. We’re going to highlight those people who are behind the scenes that help make things run as smoothly as they do.

Liz Cope is the Executive Associate to Chris Beard and she is in her fifth year for the men’s basketball program, but Liz might be most famous for her Swag Surfin on the last Fireside Chat (she’s on the right and I think that is graduate assistant Taylor Sinclair is on the left).

Catch a🌊with us Saturday when we host Kansas in our home finale.

Cope is originally from California, earning her bachelor’s degree at Cal State Fullerton (FN 1). Cope then got her start working for the UC Irvine baseball program from 2005 through 2007 (FN 2) before going back to Cal State Fullerton to be part of the baseball program from 2010 to 2011. Cope then worked for the Tiger Woods Foundation in Irvine for 11 years and was the auction manager for the foundation, helping raise $700,000.

Cope arrived in Lubbock in 2015, first being hired by Tubby Smith and apparently she was kept because she’s really good at her job and now we find out that Cope is really great at Swag Surfin.

Liz, thanks for everything that you do.

FN 1. Did you know that Cal State Fullerton’s mascot is Tuffy the Titan, a terrific looking pachyderm (i.e. elephant). 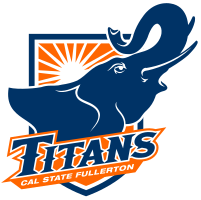 FN 2. UC Irvine’s mascot is Peter the Anteater and is adorable.