I don’t know that there were a ton of surprises, but obviously some questions as to the Texas Tech depth chart that was released yesterday. I don’t have a ton of time to discuss (again, no internet at home and trying to post something before I need to make actual money), but would love your comments.

I am a bit concerned about left tackle. The best left tackles on the roster are an inexperienced JUCO transfer and two true freshmen. I’m sure that some guys could swing over there if needed, but that’s concerning for me. I don’t know how that will play out in the Big 12. I’m not worried about Burger, he’s got a ton of snaps at Wofford, so I’m okay with that. 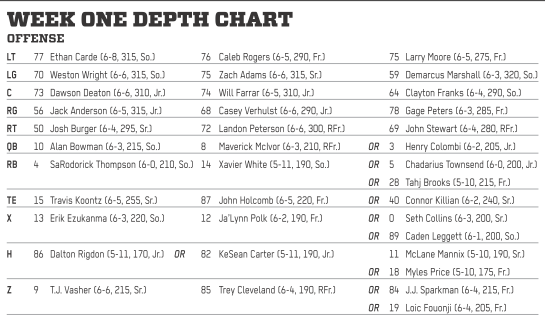 I thought the Spur spot was going to be more defensive back than linebacker (which is the way it was last year until Texas Tech ran out of defenders and Beck played that spot) and Fields was essentially assured of that starting spot. I don’t know. The lack of linebacker depth is alarming? I don’t know if that’s too strong of a thought.