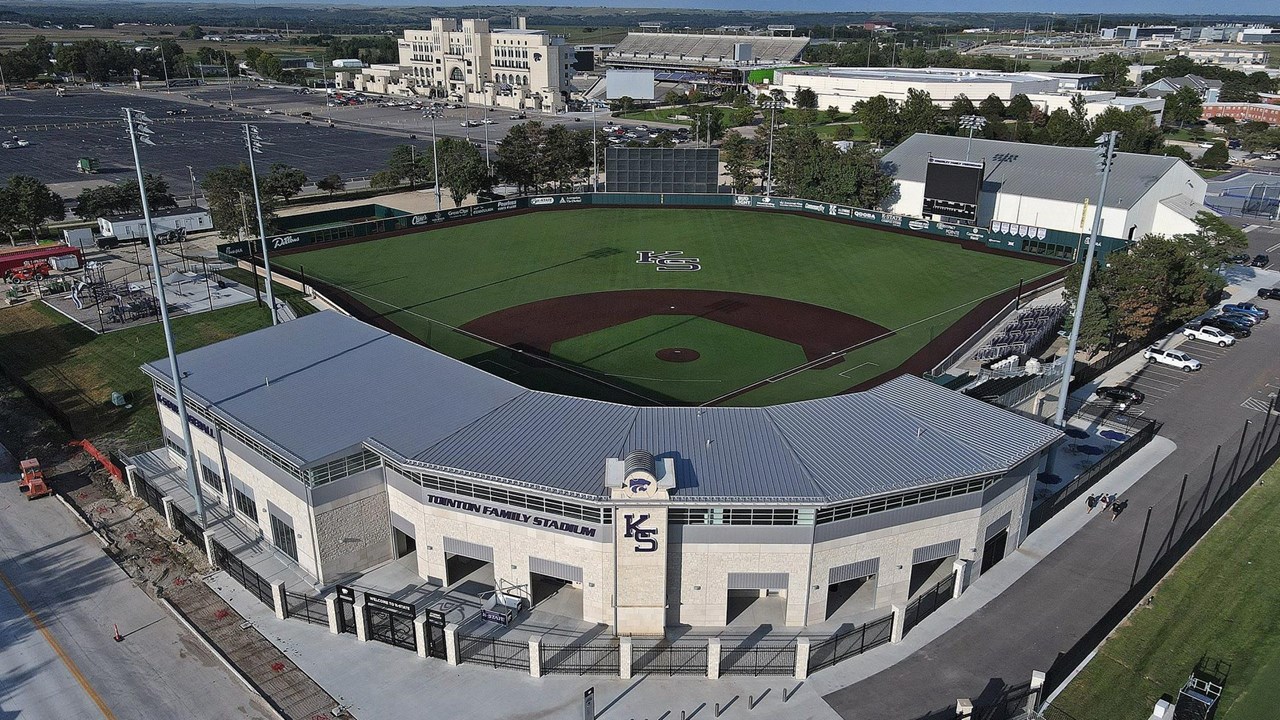 I was a bit curious about the Kansas State stadium, and Tointon Stadium was renovated and debuted in 2020, but with a short season, we really didn’t get to see it. Certainly a lot more substantial in terms of the façade, the old stadium really sort of looked like a gloried high school stadium (no offense). In addition to the new façade is new turf, which I think is a significant upgrade from the old turf, which maybe looked like the old Veterans Stadium turf (go into the wayback machine as that’s an old sports reference regarding the old turf where the Philadelphia Eagles used to play).

No. 4 Texas Tech baseball will look to carry its momentum into April as the Red Raiders open the month with a three-game Big 12 set at Kansas State, starting Thursday at Tointon Family Stadium in Manhattan, Kansas.

The entire series can be seen on Big 12 Now on ESPN+. Fans can also tune in to the radio call on the Texas Tech Sports Network from Jamie Lent and former Red Raider All-American Cameron Warren.

K-State is primed for its home-opening Big 12 series, as No. 3 Texas Tech visits Tointon Family Stadium for a three-game series starting Thursday at 6 p.m.

The second game of the series is set for Friday at 6 p.m., with the finale slated for a 4 p.m. first pitch Saturday. K-State (13-10, 1-2 Big 12) lost all three games in its first conference series at No. 13 Oklahoma State last weekend.

Texas Tech (19-4, 2-1 Big 12) enters the weekend on a five-game winning streak while having won 19 of its last 20 games overall. The Red Raiders’ Dru Baker and Jace Jung rank second and third, respectively, in the Big 12 in hitting.

The Cats will send ace left-hander Jordan Wicks, who ranks second in the Big 12 with 51 strikeouts, to the mound Thursday night. Carson Seymour takes the hill on Friday while Connor McCullough will get the call Saturday.

No. 4 Texas Tech baseball belted six home runs, including three from Jace Jung, to overwhelm Kansas State, 17-1, on Thursday night in the first of three games at Tointon Family Stadium in Manhattan, Kansas.

Tech added four doubles to finish with a season-high 10 extra-base hits in the contest. The 17 runs mark the most Tech has scored in a game in Manhattan and its second largest output of the season.

No. 4 Texas Tech baseball fell into an early 6-0 hole and was unable to recover as Kansas State took a 7-2 victory on Friday night at Tointon Family Stadium in Manhattan, Kansas.

A day after Tech handed the Wildcats (14-11, 1-4) their worst loss of the season, K-State responded Friday with two home runs in the first inning and three for the game to even the three-game set against the Red Raiders (20-5, 3-2).

Left-hander Patrick Monteverde (5-1), who hadn’t allowed a home run entering the start, allowed two to the Wildcats in the bottom of the first as K-State built a 3-0 lead. The Cats tallied three more runs in the third off two doubles and two singles and ended Monteverde’s day after four frames.

No. 4 Texas Tech baseball received another setback on Saturday as Kansas State went yard four times to claim a 10-4 victory in the rubber match of a three-game set at Tointon Family Stadium in Manhattan, Kansas.

After opening the weekend with six home runs and 16 hits in a 17-1 win on Thursday, the Red Raiders went deep one time the remainder of the series and combined to hit 1-of-16 with runners in scoring position, including a 1-for-6 mark in the finale.