Good morning. It’s time.  At least I think it’s time, to start looking at opposing teams on the Texas Tech football 2015 schedule, although I have admittedly not counted the number of weeks until football season, but this feels about right. As a bit of an aside, I spent three weeks staring at my computer screen to come up with something that was a bit fresh and interesting and what I hope to do this summer and during the year is to utilize a few more graphs and visual things that are easily prepared each week. Enter Google Sheets, where I think I’ve come up with something for the game-week previews and these summer previews. Something that’s appealing and easy to read and gives you a good sense of who to watch out for. When we get to the season, we’ll focus more on match-ups between the two teams and players.

I’m also sure that there are more fancy ways to provide some data, but my goal with this was to provide something that you can use and easily digest. I know there are much better football metrics out there, and we might get into some of them in the fall, but for me, I wanted to know who were the players making plays for the opposing teams and how do I go about showing you who those players are.  Like I said, there’s F/+ rankings and S&P rankings and all sorts of things, but I think there’s a line between all of these great numbers and what you can use. I was having this conversation with Brian during our Staking The Plains Dallas conference (it was very exclusive) and those numbers are great, but a large number of fans want something that they recognize as much as anything, at least I think.

We’ll be breaking these summer opponent previews into two posts, one will be this visual post and then the second will have more video (hopefully) and game and player analysis. I’m hoping to post these on Tuesdays and Thursdays. 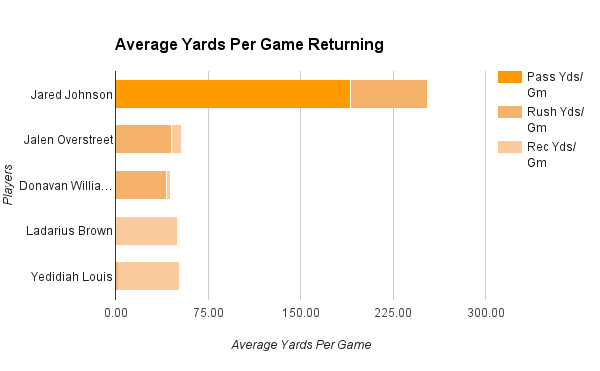 I’ve gone back and forth as to whether or not I should do total yards or average yards per game. Let me know what you think means more to you. Also, I’m only including those player that were significant contributors, not the one-off situation where a guy returns a fumble for 95 yards and then “averages” 95 yards a game.

Sam Houston State is a pretty good little running team and you should recognize the name of Jalen Overstreet as he was a former Texas player that was part of the Strong-exodus. SHSU’s leading rusher from last year, Keshawn Hill, graduated and he averaged 76 yards a game last year. Also note that Johnson is a bit of a dual-threat player in that he’ll pick up some yards with his feet. Also of note, if you’re a running back for the Bearkats, you’re not catching a ton of passes out of the backfield. Hill caught 32 for about 300 yards last year, but as you can see, the running backs don’t catch a ton of passes out of the backfield. 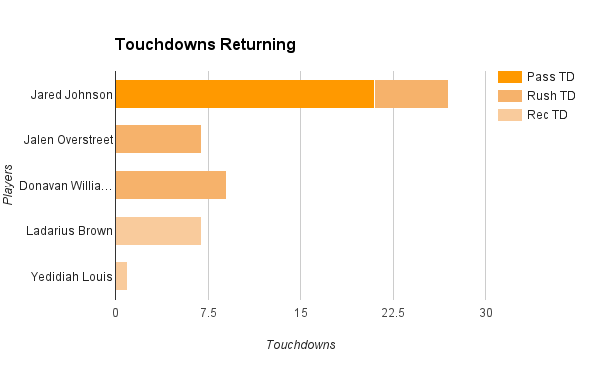 Johnson is your touchdown maker (although he also threw 12 interceptions last year). The aforementioned Hill had an astounding 18 touchdowns last year on the ground, yet Texas Tech had 8 rushing touchdowns . . . the entire year. The receivers aren’t as seasoned as I was maybe expecting, but I’d also add that Gerald Thomas, who isn’t on this list, caught 6 touchdowns last year. 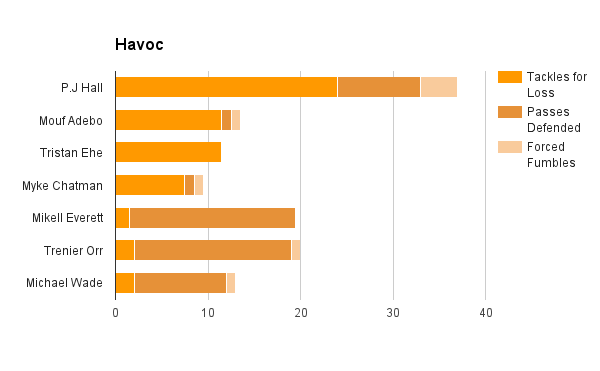 Hall is pretty much a one-man wrecking crew. I thought the stats were made-up when I first looked at them, but he’s doing it all. And SHSU is really good at creating a pass rush and defending the pass. To be honest (again, we’ll preview this more before the game) but the havoc stats in comparison to Texas Tech? The Bearkats have 211 havoc stats to 133 for Texas Tech.