The OU offense is LOL good.

Oklahomas’ defensive demise has been a bit overblown by Oklahoma folks, but they’re trying for a playoff spot and a loss to Texas severely hurts those chances and allowing 48 points to a not great offensive Texas team is going to do that. Although I haven’t done the math, my guess is that Oklahoma is doing well to quite well in points per drive, that the offense scoring so quickly and so often (what a problem to have) is a big part of the reason why maybe the defense looks worse than it does. Still though, the Oklahoma defense is good against the run (39th in rushing S&P+) and in the back half of the nation in terms of passing (74th in passing S&P+). If the Texas Tech offensive line wants to show that they’re good, well, this would be a very good time to do that.

LOL. That offense is just stupid. The reason you can’t see the figures on the Oklahoma offense is because the Sooners’ offense is ranked 1st in 3 of the 5 categories, so it’s as elite as you might expect. Oklahoma is the best in the nation in passing S&P+ and 4th in rushing S&P+. So despite the running back injuries, Oklahoma is darn near impossible to stop on the offensive side of the ball. The offense did not drop a single beat when Murray took over this year.

College Football Analytics: The Sooners are 9th overall, which is the worst among the advanced analytics. Believe it or not, Texas Tech is 22nd, which is probably a lot better than a lot of you are thinking. We talked last week about how the Iowa State game was a toss-up and it was, although the final score is a bit deceiving, the game was tied with what, 4 or 5 minutes left (I can’t remember) and then things just fell apart. Despite the discrepancies in ranking, CFA has Texas Tech with a 52.6% chance of winning this game which is somewhat crazy to consider. However, and this is a significant “however,” the Kansas State game is dangerously close to being a toss-up game, 56.5%.

FEI College Football Ratings: The Sooners are 5th overall, while Texas Tech is 29th overall. That seems about right.

ESPN’s Football Power Index: Oklahoma is 4th overall and Texas Tech is 19th overall. The FPI only gives Texas Tech a 28.4% chance of winning against the Sooners, but gives the Red Raiders much better odds than CFA, 59.3% against Texas, 76.4% against Kansas State, and 80.1% against Baylor. 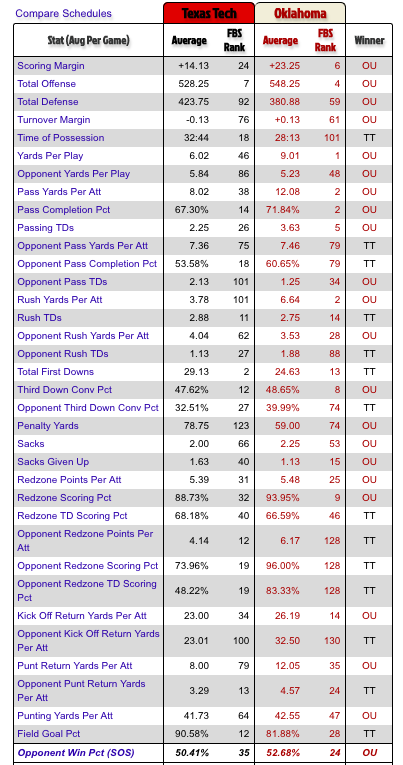