How to Watch: ESPN3 | WatchESPN 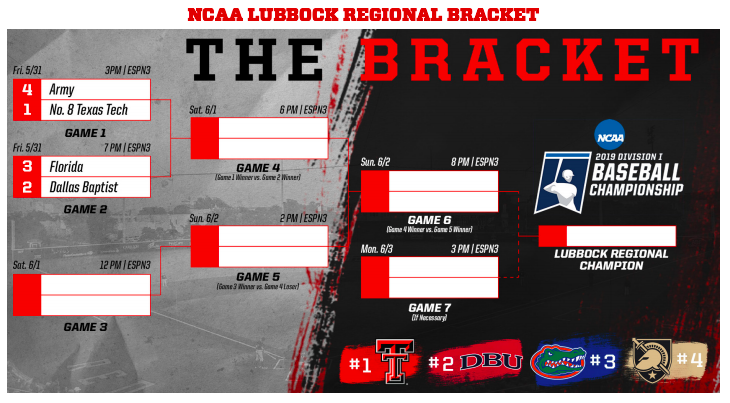 Florida, which faces No. 2 seed Dallas Baptist at 7 p.m. Friday at Dan Law Field/Rip Griffin Park, is 33-24 but went 13-17 in the Southeastern Conference.

“We’re just fortunate to be in, to be honest with you,” O’Sullivan said. “I think we have had a fairly inconsistent year. We have shown some steady improvement as the season’s gone on, but I think our kids are excited. It’s a different part of the country that they’re probably not used to visiting.”

Once again, No. 8 national seed and top-seeded Texas Tech gets another shot to start the journey to the biggest stage in college baseball when it hosts fourth-seeded Army at 3 p.m. Friday to kickoff the NCAA Lubbock Regional on ESPN3 and the ESPN app. The nightcap pits No. 2 seed Dallas Baptist against No. 3 seed Florida at 7 p.m.

“There’s still a little bit left in the bottle, I think, from when I threw it back off the field,” Jung said. “It’s just something that I feel like, If we make it back to Omaha, we’ll be taking dirt from here and take it up to Omaha for familiarity. Just say, ‘Hey. This is our field.’ There’s no need to go out there and stress through everything. Let’s just have fun and play the game.”

The Red Raiders (39-17) will look to enjoy themselves when they face off against the Black Knights (35-24), who tied for second in the Patriot League and know a thing or two about defeating the host team in a regional.

Texas Tech is clearly the favorite, but Dallas Baptist has been a tough out for the past decade, Army will not be intimidated, and the underachieving Gators have the firepower to earn a trip to the super regionals if they play up to their ability. The Red Raiders should advance, but they will have to earn their ticket in a tricky bracket.

But the former Rider standout wasn’t content in being a reserve. He also knew cracking Tim Tadlock’s starting lineup wouldn’t be an easy accomplishment.

However, Kelly knew that hard work is what carried him west, and he leaned on that determination to seize a starting role at third base for the Red Raiders.

Texas Tech (39-17) begins its quest for Omaha at the Lubbock Regional with a 3 p.m. Friday matchup against Army. The other two teams in the regional are Florida and Dallas Baptist.

“It’s been rewarding. You go through a bunch of struggles in college baseball and being a student-athlete,” Kelly said. “I came in the fall with something to prove after not playing a lot last year. I worked really hard to try and get in there.”

The No. 8 Texas Tech baseball team opened the NCAA Lubbock Regional with a decisive 11-2 victory over Army Friday afternoon at a sold out Dan Law Field at Rip Griffin Park.

The Red Raiders (40-17) jumped out to a 3-0 lead in the first and added crooked numbers in the second, fifth and seventh to down the Black Knights (35-25) in just their second all-time meeting. It marks the fourth straight year Tech has won its regional opener.

Tech freshman right-hander Micah Dallas (6-0) retired the first 12 batters he faced in his NCAA postseason debut. He allowed his first base runner in the top of the fifth and first hit in the sixth on his way to the win. The Aubrey, Texas, native struck out seven in 7.0 innings of work, matching his longest out of the season.

Third-seeded Florida put up a fight, but No. 2-seed DBU answered each blow Friday night in an 11-8 win in the first round of the NCAA Lubbock Regional at Dan Law Field. Jackson Glenn and Andres Sosa homered as part of a 17-hit attack by DBU (42-18).

Glenn’s homer gave DBU a 2-0 lead as it cleared the right field fence in the bottom of the first inning. A two-run home run by Cory Acton brought the Gators (33-25) level in the second, but a Blayne Jones double and a Bryce Ball single restored the Patriots’ two-run advantage. RBIs by Sosa in the fifth and Evan Sandman and Luke Bandy in the sixth extended the lead to 7-2.

MD Johnson improved to 10-2 with the win, as he threw 6.2 innings and limited Florida to five runs, three of which came around on a bloop double in the seventh. Sosa launched the second pitch of the bottom of the seventh over the left field fence to swing the momentum back DBU’s way. The Gators got a run back in the eighth, but an RBI groundout by Bandy and Herbert Iser’s two-run double padded the Patriots’ lead further.

Sophomore right-hander Jack Leftwich delivered exactly what the Gators needed on Saturday against Army, a strong outing to keep Florida’s season alive. Leftwich retired the first 16 batters he faced in a 111-pitch outing that covered seven innings. Leftwich allowed only one hit and one run — a solo homer to Josh White in the sixth — while striking out seven with one walk. Leftwich, coming off a two-hit shutout at Missouri in his last start on May 17, had a scoreless streak of 14.1 innings until White’s homer. Meanwhile, the offense continued to produce with 14 hits — including four home runs — and the defense did not commit an error.

Senior Cameron Warren went yard as part of a three-run third inning that would prove enough to send No. 8 Texas Tech past Dallas Baptist, 3-2, Saturday in front of 4,567 fans at Dan Law Field at Rip Griffin Park. The win moves the Red Raiders to the regional finale set for Sunday night.

The Red Raiders (41-17) struck early as Warren connected on a two-run shot to open the scoring in the third, before sophomore catcher Braxton Fulford added an RBI single to build a 3-0 advantage. The dinger was Warren’s team-leading 16th of the season and second in as many days after delivering a three-run bomb Friday against Army.

The Patriots (42-19) cut into the lead in the fifth with two runs, but junior Taylor Floyd (5-3) preserved the lead out of the bullpen to put Tech in the driver’s seat, one win away from advancing to its fourth Super Regional in school history.

DBU only scored in one inning in Sunday’s elimination game at the NCAA Lubbock Regional but outlasted Florida in a 9-8 win at Dan Law Field. The Patriots (43-19) hit three home runs as part of a nine-run fourth inning rally in the win.

Trailing 2-0 and with just one hit through three innings, DBU erupted in the fourth. Bryce Ball led off with a solo home run to cut the lead to one. Jimmy Glowenke singled, stole second, and scored on a sac fly to tie the game. With two out, Andres Sosa blasted a solo homer to put the Patriots on top. Augie Isaacson doubled in a run, followed by a two-run single by Luke Bandy, who subsequently stole two bases. Ball walked in his second plate appearance of the inning, and Glowenke capped the onslaught with a three-run home run.

Jimmy Fouse earned the win to improve to 6-0. He allowed six runs on seven hits in five innings. MacGregor Hines provided three huge innings in relief, limiting the Gators to two runs with four strikeouts. Bur Carraway stranded the tying run at third to earn the save.

For the fourth time in school history, the No. 8 Texas Tech baseball team has secured its spot in the super regional round of the NCAA Tournament.

The Red Raiders (42-17) wrapped up a sweep of the 2019 NCAA Lubbock Regional with a 3-0 shutout of Dallas Baptist on Sunday night in front of a season-high 4,679 fans at Dan Law Field at Rip Griffin Park.

It is the second-consecutive season Tech has swept its way through the regional round after doing so in 2018 for the first time in school history. Tech defeated Army, 11-2, to open the regional and defeated the Patriots, 3-2, Saturday night.

In addition, it is the first time in the school’s 70-year baseball history the Red Raiders have advanced to the Super Regional round in back-to-back years. Tech advanced out of its four-team pod in 2014, 2016, 2018 and now 2019.

Senior Cameron Warren delivered an early haymaker with a three-run shot in the first, and sophomore Bryce Bonnin tossed seven scoreless innings in his NCAA Tournament debut. The shutout victory is Tech’s eighth in an NCAA Tournament game and its second to advance to a Super Regional.