For the last two years I’ve surprised my boys on the first Thursday of March Madness by picking them up early from school, heading to a restaurant and watching the first-round games with a group of friends. The fact that I was able to surprise them on two different occasions by doing exactly the same thing speaks to the overall attention span of prepubescent boys, but I was so looking forward to surprising them again next Thursday.

The decision to cancel this year’s tournament is heartbreaking as I cherish those moments with my boys. And the NBA is a TV staple in our house every night during the season, so we’re missing out there as well. This, in addition to the cancellation of college baseball and virtually every other sporting event, is just awful. But the decision to cancel or postpone was absolutely the right thing to do.

I’m not a particularly intelligent man. I’m not a scientist, doctor in a position of any significance. Hell, I can’t even raise sons that can anticipate a day when I might surprise them and pick them up from school early. But I can digest and aggregate data. I learned how to do it, and do it well, by writing here and on other sites over the course of the last decade. And that’s what I’m hoping to do today; to share with all of you a handful of charts and information I’ve culled that lays out why the cancellations and myriad precautionary measures were prudent and why, even after doing all of that, the worst is yet to come.

Covid-19 was late in arriving here. We’re several weeks behind China in its spread and at least 11 days behind Italy. The cases in China seem to have peaked, which is great news, but the regime undertook extreme isolation and quarantine measures to get to this point. It’s impossible to imagine America responding in the same way, which makes us all the more vulnerable to the spread. But what is most alarming is to see what is going on in Italy, and how we compare. 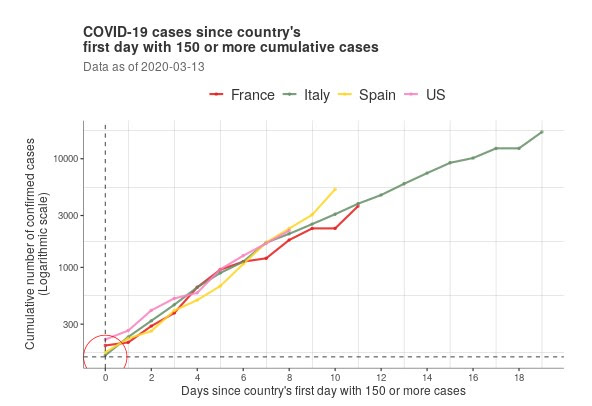 Two things in this chart concern me: The cases in France and Spain seem to be spiking, which means they could soon outpace Italy in the virus’ severity. Secondly, the number of US cases are charting almost exactly the same as Italy. And, with the death toll spiking, Italy is in complete lock down today.

Instead of trying to tell you what to do and arguing about how just washing your hands makes everything OK, I’d like to focus on the real danger as the virus spreads: our nation’s inability to handle the coming surge in the need for hospital beds and ventilators. A recent article in the Boston Globe serves as a cautionary tale.

Until last week, the Italian public health care system had the capacity to care for everyone. Our country has universal health care, so patients aren’t turned away from hospitals here. But in a matter of days, the system was being felled by a virus that I, and many other Italians, had failed to take seriously.

The inability of the medical system to deal with the flow of patients in critical condition is not one of the problems of this complex medical emergency. It is the problem. I shouldn’t have been surprised. As a journalist, I had read, heard, and spoken to several experts explaining that the most immediate threat of Covid-19 was the hospital system becoming overwhelmed, and therefore the most pressing need was to avoid too many people getting sick at the same time, as resources are limited. (It’s what’s called “flattening the curve.”)

The chart below is four days old but it shows how woefully behind the US is in testing. As tests ramp up the number of new cases will skyrocket. And as the incubation period ages in those infected (remember we’re 11 days behind Italy) the death toll will rise. As of March 14th the total cases per million in population in America is a paltry 8.6 In Italy? the number is 349.9. We are about to see an explosion in cases. 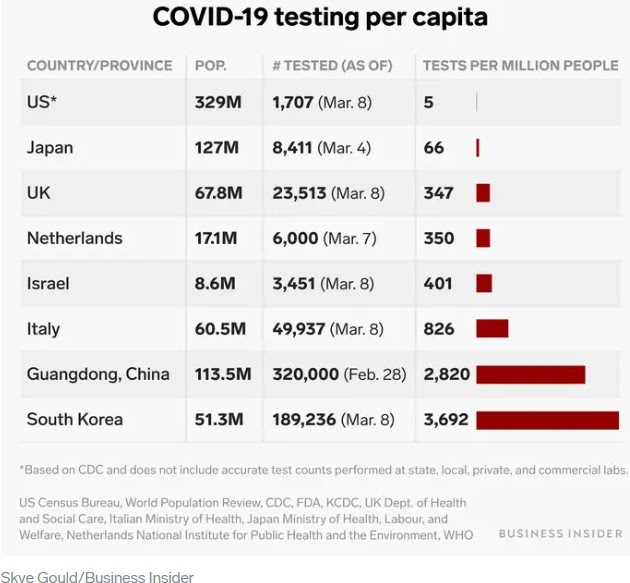 So it is critical to remember the true crisis on the horizon is in the number of hospital beds and ventilators available in the US. And that’s where comparing Covid-19 to the seasonal flu falls apart. As the New York Times states in this article, “influenza numbers are spread out over eight months or more. They don’t increase exponentially over the course of weeks, as the cases of Covid-19 are doing right now.”

From the same article, written by Dr Aaron Carroll:

A crucial thing to understand about the coronavirus threat — and it’s playing out grimly in Italy — is the difference between the total number of people who might get sick and the number who might get sick at the same time. Our country has only 2.8 hospital beds per 1,000 people. That’s fewer than in Italy (3.2), China (4.3) and South Korea (12.3), all of which have had struggles. More important, there are only so many intensive care beds and ventilators.

It’s estimated that we have about 45,000 intensive care unit beds in the United States. In a moderate outbreak, about 200,000 Americans would need one.

That’s the data that has me worried. And my point in writing this is to raise awareness in this community; a community I care so much about. Covid-19 is “just like the flu,” except it’s 10 times more deadly, between two and four more time contagious and its peak season will be condensed from eight months down to four weeks. It’s the flu on steroids and it is here.

But my writing here is also an attempt to remind us all what a great country we live in. We are voluntarily making sacrifices in our daily lives to try and stem the tide; to try and protect not only ourselves and our families, but those around us, too. Staring into the void without any sports or entertainment or public gatherings for the foreseeable future is depressing and frustrating. But it also makes me proud of my country. We will make it through this. I’m praying that the preventative measures our leaders have take will help to “flatten the curve,” and that this is all over blown.But we should steel ourselves for a difficult few weeks. The data says as much.

Ed. Note from Seth C. – I’ll keep my comments simple, I’m worried not for me, but for the people in my family who may be compromised and we all probably have them. Cancer survivor. Diabetes. Over 70+.

Graphs are useful but to really get what that rising curve is, have a look at the obituaries page of this Bergamo daily newspaper, comparing one from February with one from now pic.twitter.com/78mgZseyVt