Rick Byrd (Belmont head coach) who is also the NCAA rules committee chairman said that the men’s basketball shot clock is likely to undergo a change from 35 seconds to 30 seconds. Is this a good thing? 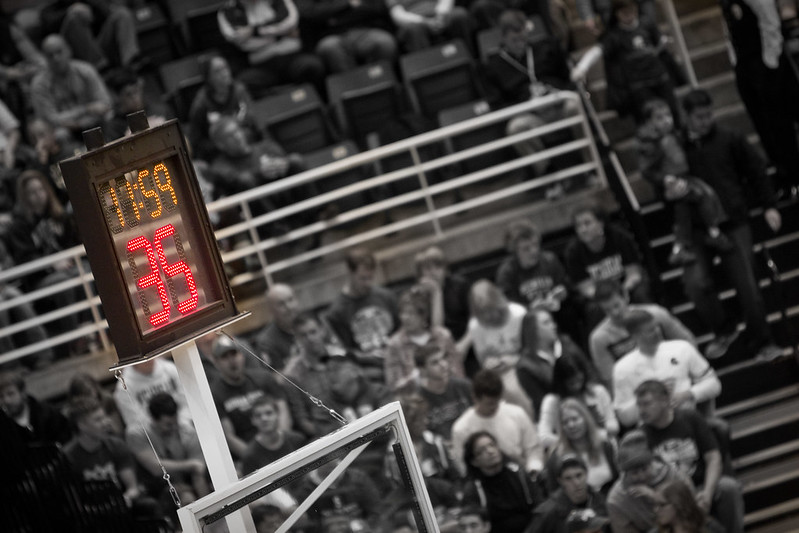 Last week we read about Byrd telling ESPN.com the thought process behind the change…

“Now there’s a real decent chance,” Byrd said. “It’s pretty evident a lot more coaches are leaning that way. The opinion of coaches on the shot clock has moved significantly to reducing it from 35 to 30. And all indicators are pointing toward that.”

The first thought that pops into everyone’s mind is an automatic cheer for the effort of coaches wanting to spice up college basketball. For years college basketball fans have been dropping like flies because of increased foul calling, and decreased scoring. It seems only the avid fans have stuck around during the somewhat tedious non-conference scheduled games. The most complaints you get from folks is that college basketball is not “entertaining” enough. It’s not flashy, it’s not fun anymore.

Who am I to say that any of those opinions are wrong? The coaches, fans, and media seem to want some type of change.

“I think it’s fair to say the buzz about the game is that scoring in the 50s can be ugly,” Byrd said. “There’s a lot of talk about it — more coverage than ever before. All of that has created acceptance from the coaches’ side.”

Byrd said coaches, fans and media are expecting the rules committee to do something that impacts scoring.

“There’s not a lot we can do unless we rewrite the rules,” he said. “There will be pressure to do something, and one of those things to do is to lower the shot clock to 30. I think that would improve the pace of play.”

So to get this straight, people want the game to be less ugly? I always was attracted to the wonderful game of college basketball because of the way teams set up their offense AND defense. Speeding up the pace of the game is going to lead to more turnovers and more errors for teams. Most of the guys on a college court won’t even sniff a chance to get into the NBA. At the professional level athletes can they play with the rapid pace of an NBA 24 second shot clock. In college it becomes a much more daunting task to cut down on the time they have to get set.

My thoughts are that this is going to play in the favor of teams like Kansas and Kentucky, who have professional caliber talent on their team. Though, for a team like our Texas Tech Red Raiders who need to set things up on offense and be patient for their opportunities; it could spell disaster for the next few years. Yes, eventually the squad will adapt to a faster pace offense. But, until they catch-up with their Big 12 opponents game-flow it might be a steep learning curve. According to Byrd…

“There’s a lot of inactivity in some coaches’ approach to offense,” he said. “I do think the shot clock would help with that. There would be more flow.”

Tubby Smith has been teaching and running his version of the flex offense to players with a 35 second shot clock since the 1993-94 season. How will he go about tweaking it now? Many times last season Tech would have to throw up a desperation shot when the clock wound down to a few ticks left. Now, we could cut up to about 15% of that time.

I will try and embrace the shot clock reduction this next season if it happens, but I am more worried about it’s effects on Texas Tech than about the “beautification” of college basketball. Higher scores appeal to the masses, but there are still some of us out there that prefer grit over glamour. I prefer to watch college teams hammer away and grind it out over jacking up shots. When I need my “entertainment” basketball fix I go watch the Houston Rockets who are paid for a living to play the game.

Other items that will be reviewed by the rules committee on May 12-15 in Indianapolis… widening the lane and the 3-point shot distance, block/charge arc to go from 3 to 4 feet to be in line with the NBA, and use of replay and timeouts. I’ll give more MBB rule change updates after that conference takes place.