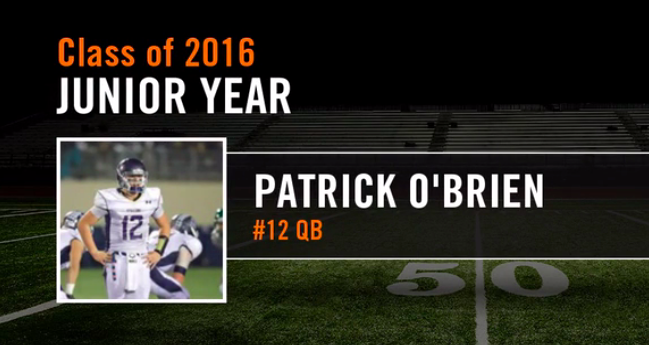 Texas Tech and head coach Kliff Kingsbury has offered another quarterback after Terry Wilson Jr. chose the Cornhuskers yesterday. Kingsbury has offered Patrick O’Brien, 6-4/225, from San Juan Hills High School in San Juan Capistrano, California. O’Brien was thought to be a Nebraska lean, but after Wilson’s commitment, this would seem to change a bit. O’Brien is a 3-star quarterback and his junior numbers weren’t anything to write home about, but what elevated O’Brien to a more national status was winning the QB MVP award at The Opening Los Angeles. If you watch the video at the link, you can see that O’Brien is being lightly recruited, only by Ivy League schools and the video is from March, so about a month an a half ago. Now, O’Brien has received offers from the aforementioned Nebraska, Colorado, Colorado State and Texas Tech.

I mentioned O’Brien’s junior numbers, where he passed for 2,093 yards, 12 touchdowns, 11 interceptions and ran the ball for 640 yards on 143 attempts with 13 touchdowns.

O’Brien has a good arm and is a pretty good athlete. He has no issue standing in the pocket to deliver the pass, and throws well on the run. There are times that I think O’Brien’s wind-up is a bit long, but the stats baffle me a bit, especially the low touchdown rate. Of course you never know about the receivers and the line or anything else.