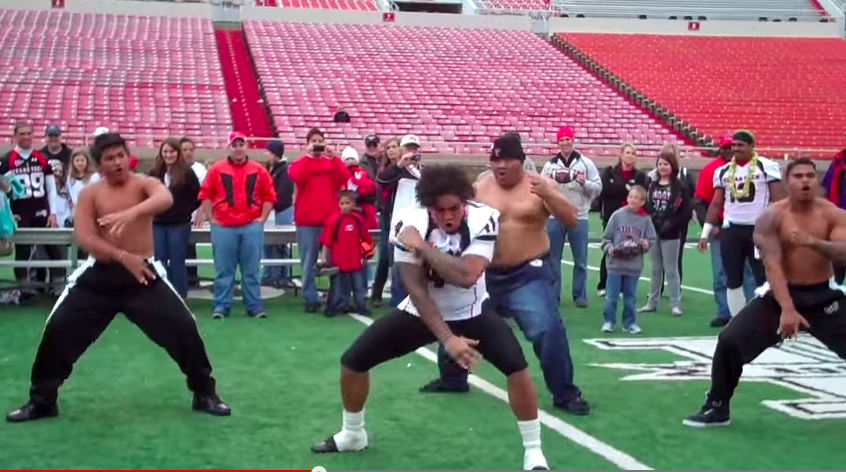 Last week, I wondered about the haka, the idea that we’ve seen the Fehoko’s perform it in 2010, with Sam, V.J. and a very young Breiden:

I wanted to know what the haka was and what it meant. Aside from thinking that it was some sort of war chant (this was my guess) and that it was started by the Maori people of New Zeland, I didn’t know that it was.

There are multiple hakas and different hakas, but there is one main haka, the Ka Mate. Tradition of the haka started as early as 1888 when a new Zeland team toured the UK (via Wikipedia. The haka was part of the national team’s performances and the All Blacks rugby team was said to have first performed the “Ka Mate” haka in 1906. The Ka Mate has the leader start:

Ringa pakia! — Slap the hands against the thighs!
Uma tiraha! — Puff out the chest.
Turi whatia! — Bend the knees!
Hope whai ake! — Let the hips follow!
Waewae takahia kia kino! — Stomp the feet as hard as you can!

So the Ka Mate was done to commemorate a person who had escaped the Ngati Maniapoto and Waikato tribes and hid under in a food storage pit (for real) and thought he was hiding under the skirt of a woman, only to be under the skirt of friendly chief.

The translation is a bit different according to the Sydney Morning Herald:

This is the hairy man
Who fetched the sun
And caused it to shine again
One upward step! Another upward step!
An upward step, another… the sun shines!

This makes more sense to me, a man who thought he was dead, now lives. After being in the dark, the man gets another upward step and the sun shines again. I like that.

You can hear it more clearly here:

If you go back and listen to the Fehoko’s haka, you can definitely hear the “ka mate” and “ka ora'”. I die. I live. Despite the menacing faces and loud voices, the haka is about redemption. To live and fight another day. One upward step at a time. That’s an interesting choice of words. Not just a step, but an upward step.

Without getting too deep, those are good words to remember, that people help us and this, what we have is precious. Work hard for it.