This week, we take a look at a play run from the pistol formation the resembled something that Oklahoma State, Baylor or TCU would have called.

Kliff Kingsbury’s play calling around the endzone has gotten to be somewhat creative. We always hear how difficult it is for spread offenses to operate near the goal line due to the field constricting when their offense is predicated on creating space and spreading defenses out.

The second touchdown pass to Justin Stockton reflects some of the changes these spread offense have had to adopt to remain effective down close to the goal line. This call was run out of a pistol formation that is fundamentally similar to what a lot of West Virginia, Oklahoma State, Baylor and TCU run. The formation is actually similar to what Kansas State runs in their goal line package if you can think a little abstractly.

To start, the offense is in a pistol formation with Brad Pearson on the end as a tight end. Tony Brown is the lone wide receiver at the bottom of the formation. Demarcus Felton and DeAndre Washington are lined up in the backfield before the snap or motion, with Felton aligned ahead of Washington. Stockton comes in motion left to right toward the other running backs and tight end. 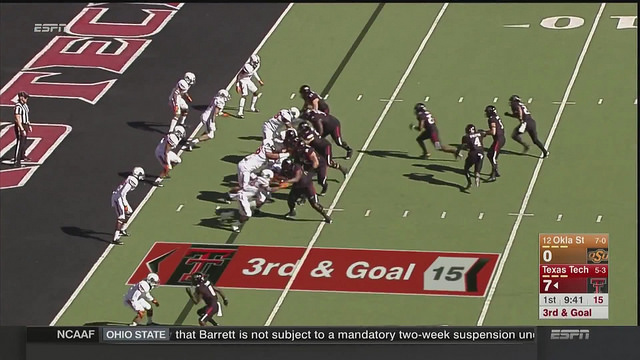 In the above shot, you can see the offensive line is down blocking to the left, away from the motion of the play. If you look closely, they let the defensive line come to them, indicating this is a pass play instead of a pure rushing play (as not to get flagged for ineligible receiver downfield). 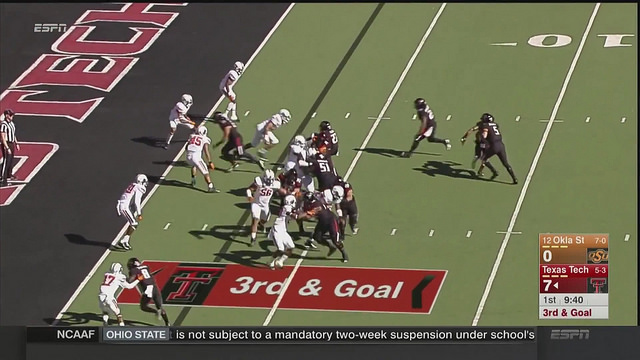 At this point in the play, Mahomes has just let Stockton go in front of him as he faked the hand off on the sweep. Washington is heading towards the line of scrimmage to pick up a blocker. Felton is about to engage a defender. Pearson has just released to run a route in the endzone. Watching this play live, at this point I was expecting for Mahomes to look for Pearson in the endzone. 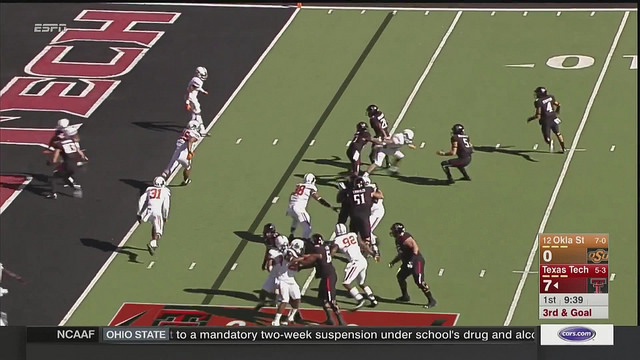 Mahomes starts to run and Felton misses his block. Pearson is covered pretty well with the defender in front of him, plus the other one standing on the goal line looking back into the backfield. My expectation about this play changed when I saw Mahomes break down to run, as I thought it was an option play with Stockton. When Felton missed his block and Mahomes cut back inside, I thought this might end with a short gain for Mahomes but no touchdown. Oklahoma State has initially defender this play pretty well. 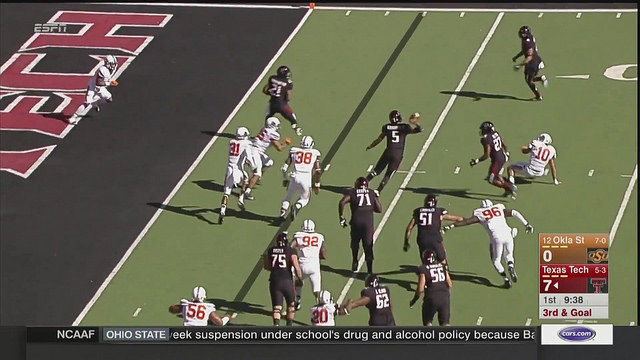 As Mahomes gets near the line of scrimmage, you can see that the OSU defense has collapsed to stop him from running, leaving Stockton all alone. With Mahomes pulling back to throw, all there’s left to do is hope the throw in on target and allows Stockton to catch it and keep moving forward. Washington actually fakes his block to release into a route near the goal line.

This play ends with a pretty simple toss and catch for a touchdown, but all of the pieces of this play actually set up for multiple outcomes. Tech could run this exact same looking play, but throw to Pearson, or have Mahomes run behind Washington and Felton, or pass to Washington, or even just let Stockton take the ball on the sweep (and of course pass to Stockton like what happened here). Running an option play down by the goal line allows a spread team to regain the advantage in tight spaces because it isolates defenders and forces them to react to a situation, only to take advantage of their reaction in the wrong way. All of these options are available without changing a thing about how this play is run. It’s efficient in practice, only having to run on e play but getting multiple play outcomes.