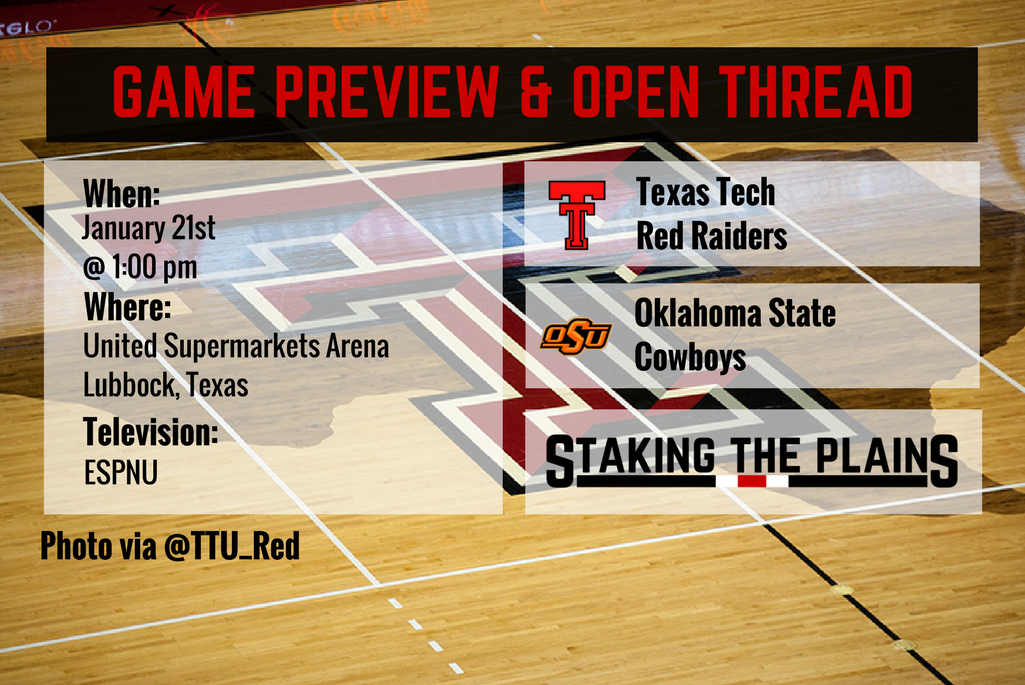 1. KenPom has Oklahoma State as the 40th best team in the nation, 10th in the nation in AdjO and 151st in AdjD. Texas Tech is falling in the rankings a bit, 32nd overall, 30th in AdjO and 64th in AdjD.

2. The Oklahoma State backcourt is unbelievably talented and all terrific scorers. This will be a terrific challenge for all three guards and I thnk we’ll see Evans on Evans, Thomas on Forte and Gray on Carroll. Evans and Gray will need to do their best to make sure and not get caught up into foul trouble, otherwise Texas Tech could be in some serious trouble. Forte, we’ve seen for four years, can hit from deep and J. Evans is a special player, but he can be inconsistent.

3. Oklahoma State is terrific offensively, one of the best in the nation, but defensively, they’re just terrible. Shockingly, the offense pulls them way up the KenPom ratings to cover for that defense, and it was okay in non-conference play, but that defense has been very problematic in conference play. Texas Tech’s defense has been dropping consistently, but it’s twice the defense that Oklahoma State runs out. A similar game plan to what Texas Tech did against TCU will be important, but the Red Raiders will have to do a better job of guarding the three-point line because the Cowboys can heat up and if they do, it could be tough to pull away from.

4. Texas Tech is a five point favorite and I’d expect another incredibly tight game with significant runs from either side. Texas Tech is still figuring out, at times, how to play offensively. The Red Raiders are still prone to go into scoring doughts and that still bothers me, especially when there are so many scoring options on the floor most of the time. It’s usually about working towards the best shot and not be aggressive. Settling for shots rather than taking the ball to the basket.

“Records can be very misleading especially this early in the race in the Big 12,” Texas Tech head coach Chris Beard said. “Oklahoma State might be one of the biggest cases to support in my whole career to support that. They are the best winless team that I’ve ever seen. They’ve been in four one-possession games and five close games late. They are two or three game winning streak away from getting right back in the race. In my opinion, they have two all-conference type players and four or five guys on the roster that will play professionally at some level. Phil Forte is one of the best college players to play in the Big 12 so the talents there, and we know the coaching is there. Brad is one of the best coaches in college basketball. He’s been doing it for a long time winning at different levels as a head coach. His teams at Stephen F. Austin were well documented, and everyone in the Big 12 knows what he’s building at Oklahoma State. Good players, good coach. We’re going to have to play very well.”

Here’s what Coach Beard had to say ahead of the #RedRaiders battle with Oklahoma State this Saturday. #WreckEm #4to1 pic.twitter.com/5NUL4DEN5Z