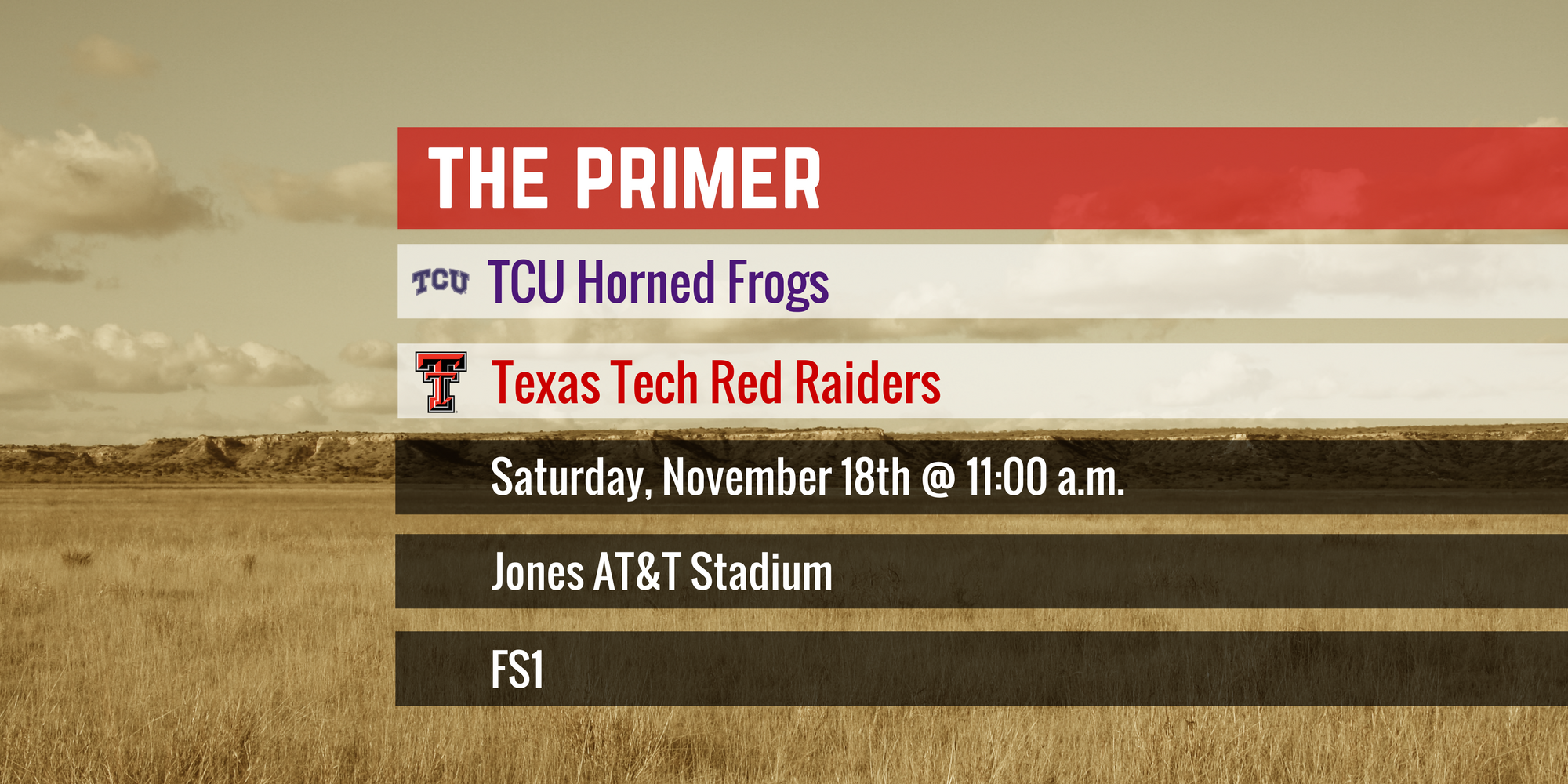 An early week preview of the TCU Horned Frogs.

TCU dropped a much anticipated match-up with Oklahoma, 38-20. I didn’t get the chance to watch, but from afar, it seemed like Oklahoma was up early and often against TCU, and then the game really was pretty stagnant in the second half, with TCU scoring 6 points in the 4th quarter, which was all of the second half points for both teams. The vaunted TCU defense had trouble stopping Oklahoma, but just about every team will have trouble stopping Oklahoma. The most signifiant news coming out of that game was that Rodney Anderson may be out for the rest of the year.

Texas Tech took care of business against Baylor, a game that Texas Tech should have probably won by more, but this is where Texas Tech is at. This moves Texas Tech to .500 on the season and needing at least 1 more win to become bowl game eligible.

This is the last home game for Texas Tech. Winning on the road is never easy and it would be on a short week as Texas Tech will be in Austin on Friday to play the Longhorns. TCU would probably like a bit of revenge after last year’s game where TCU couldn’t do much of anything offensively and Texas Tech did just enough to kick a field goal to win the game.

What to Know About TCU

Kenny Hill has been better, much better, than he was last year. He’s completing about 68% of his passes and the difference between this year and last year is that it doesn’t seem as if the coaches have asked him or want him to go deep any more. Take the short stuff, move the ball and let the running backs do the heavy lifting. Last year’s best running back, Kyle Hicks (5-10/210) has been supplanted by sophomore Darius Anderson (stats in the box). And this has been the biggest change in the TCU offense, which is that the Horned Frogs are very good at almost every metric in running the ball and with Hill also being able to run the ball for some serious positive yards, this is why the offense is so dangerous.

The receivers don’t have high catch rates, that’s probably partly because of Hill who can be pretty inaccurate sometimes. There are three primary receivers John Diarse (6-1/214), Desmon White (5-7/160) and KaVontae Turpin (5-9/153), with each of them having over 25 catches, while freshman Jalen Reagor (5-11/185) is fourth.

The TCU defense has been what’s carried this thing. They are probably the best defense that Texas Tech has played and it’s probably not really even close. Yes, they are that good. Linebackers Travin Howard and Ty Summers (6-2/242) are the leaders of the defense, while the surprise has been defensive end Ben Banogo, a transfer from Louisiana-Monroe who sat out last year and has obviously bust on the scene in a huge way. On the other side, Mat Boesen (6-4/240) has been pretty good himself, with over 5 sacks on the year.

The safeties have been particularly terrific for TCU, Ridwan Issahaku (6-1/196), Nick Orr (5-10/187), Niko Small (5-10/194) and Innis Gaines (6-2/201) have helped lead an absolutely terrific defensive backfield. It seems as if everything funnels through them and the linebackers. The two main cornerbacks are Ranthony Texada (5-10/170) and Jeff Gladney (6-0/187). I’d guess that some of those listed safeties probably play nickel back as well.

Via OddsShark, TCU opened up as 7 point favorites and that’s about where the line continues to lay, anywhere between 7 and 7.5. I would have expected TCU to be bigger favorites.