Texas Tech men’s basketball is one of the hottest teams right now in the nation. The Red Raiders have started out 3-0 in the Big 12 easily handling Baylor, Kansas, and K-State by double-digit victories. The statement win of the season (so far) was going into Phog Allen Fieldhouse and looking a full notch better than KU on their home floor. Boom! Now we are sitting at the top of the conference looking down on everyone except West Virginia (also 3-0 in the Big 12).

This is an unfamiliar feeling for us, as we are still at the start of Big 12 play. Yet, we find ourselves with a head start having most all the others in the conference trying to catch-up. Pretty cool feeling for us basketball fans that have had to watch Texas Tech usually start conference play in the bottom half of the Big 12 and claw for the top half.

Currently our Red Raiders are on fire riding a 8 game winning streak. The only blemish on our 14-1 record is the Seton Hall (14-2) loss back in November at Madison Square Garden. We have been stellar on the defensive end of the court, as our KenPom rating for adjusted defense efficiency ranks at #4 in college basketball. To those of us that are familiar with the ratings system of KenPom.com, it means that we are wrecking it on our points allowed per 100 possessions. With possessions being an estimate of –

But, to those Red Raider fans that are not basketball stat geeks the #4 ranking in this category is simply interpreted we are DAMN freaking good at defense!

On the flip side, we have kind of had the offense take a backseat to everyone discussing our stifling defense. I’m here to stand up and holler that our offense is also playing pretty well right now! We rank #25 in the KenPom rating of adjusted offensive efficiency. We are shooting at #36 in effective field goal percentage with 55.5%. If you want an explanation for the eFG%, go check out my post earlier this season that has the equation breakdown on this stat. Our three-point percentage has not cracked the top 100 overall, and over free throws are sub-200 in the team rankings. Yet, we are at #13 in our offensive rebounding percentage and are at #3 in our average scoring margin at almost +22. That is with a +17.3 scoring margin in the Big 12; meaning we are averaging beating our Big 12 conference foes by more than 17 points per game.

Defense is winning the games, yet our offense is holding it’s own to crush our opponents and not let them back in the game. We on fire! I got an email from TeamRankings.com after the K-State win, and was ready to spread the word that Texas Tech is playing lights freaking out. Here is a few snips from that email… 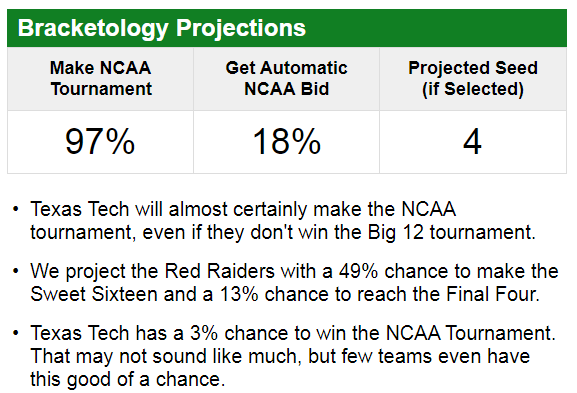 Wow, this is some exciting stuff to be reading about our Texas Tech men’s basketball team! We need to soak it all in right now, and be proud of what our team is doing. There is still a long ways to go for the rest of the season, but I am proud to be a Red Raider that is witnessing it. We can all give praise to the players and coaching staff that are flying high! Let’s keep riding the train and watch how the rest of the regular season goes.

Coach Beard is one of the most attractive names out there in the CBB world, and everyone is noticing. Including Kirby Hocutt and the Texas Tech administration. After we get more towards the end of the regular season I will post about the contract situation with Chris Beard. But, you have to believe that we are doing everything we can behind the scenes to work a deal that will keep Coach Beard and his staff more than happy to stay in Lubbock. It should be time that we pony up some big money to keep a winning program in place, and that justification will be based on results. Our eyes are on the Big 12 championship and beyond. Let’s keep winning in dominant fashion and shock the nation some more! Wreck ’em Tech!!!