Seth: One of the folks that I’ve emailed with over the years is a guy named Dallas and he was antsy about the state of the offense, so he did a little research. I’ve lightly edited I’ll let Dallas take it from here. 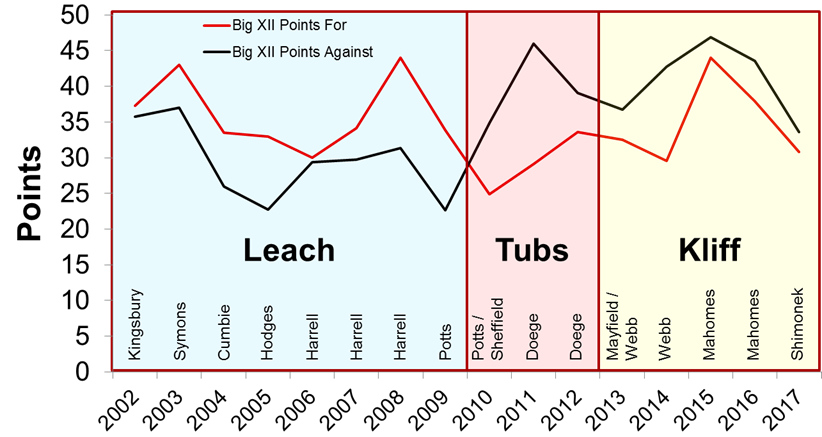 To contrast, the best years were:

The offense was 1-2 touchdowns worse than with Mahomes behind center, but Mahomes was special and the data says we can’t blame the offense. 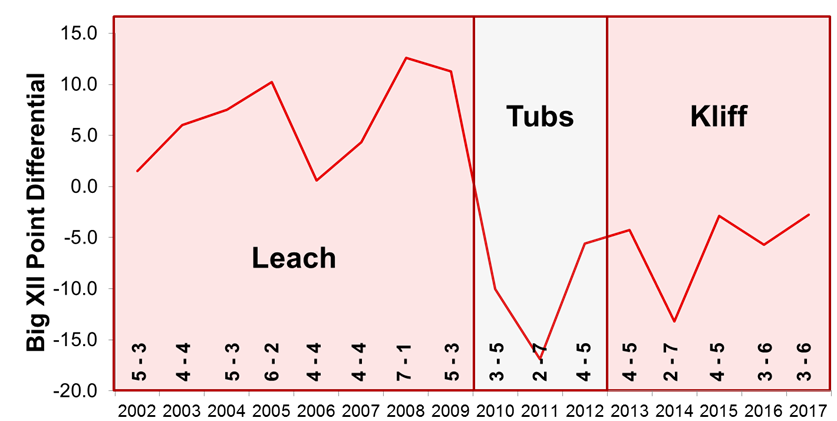 2) The drop off in point differential when Tubs took over was huge. 2010-2011 is a cliff. We got straight smoked in league play. What happened? Other teams got better? We started a round robin in 2011. At first I thought it was Leach feasting on bottom dwellers but that’s not really true. Kansas went to a BCS bowl during his time, Baylor was as bad as Kansas is now, but Colorado, Nebraska, etc weren’t any worse than the league is now. While Offense under Tuberville was the worst of the 16 year period, it was only marginally so. Defense however was a dramatic drop off as shown in the plots. We are only just now recovering from that defensive implosion. And while Baylor and Oklahoma State, all got much better in that time frame, Texas dropped off. I’d be curious to look at league wide how points per game trended over that period.

3) With squinted eyes and Scarlet and Black glasses on, there is a positive trend in becoming more competitive. That is not all that surprising, but one thing to take note of is that Tech continued to close the gap in point differential with one of the top 5 worst offensive years since 2002 (see first observation). I trust Kliff can figure out offense once Shimonek is gone, hopefully moving towards a more mobile QB. Kliff has shown with mobility he can dominate offensively. Additionally, I think our defensive numbers for points allowed was worse than it could have been this year because of the lack of offense. I know in years past Tech fans have been frustrated that scoring too fast can leave your defense exposed, so does going 3 and out. The sputtering offense in 2017 meant more defensive snaps than they would have had to endure with a more consistent offense. The defense did give up yards in chunks at times, but the eyeball test certainly said this was the best unit we’ve seen in years. Particularly in tackling. The futility in watching broken tackles was not there this year. We looked competent and when we got beat it was being out of position for the most part and not undersized athletes.

Leach had better success in League play not because he scored more points, but because his defenses allowed less. Only 3/8 years did his defense average more than 30 points to Big XII offenses. Since Leach left we have not had a single year less than 30 and 4/8 years Tech has averaged over 40 points to Big XII offenses! It is hard to make up a 10 point swing in points allowed.

The biggest positive moving into next year is that we retain continuity on defense. With average offensive production, we should be able to get the average points conceded below 30 and turn the conference record around.

It also doesn’t hurt that OSU, WVU, OU, and TCU will all have new signal callers. UT still doesn’t have a guy that scares me.

Seth’s thoughts: The only deletion from above was a comment from Dallas about how he disliked every pass that Shimonek through against USF and I’d agree, I cringed quite a bit while watching the game and I don’t typically do that. And if you want to know why I think that there’s a real chance at 8 wins, again, it really relies on the defense continuing their projection and the offense returning to a bit of normal with a more mobile quarterback. The only thing that I think I’d disagree with on Dallas, and I don’t have any data to support it, is that I don’t think the Big 12 was as grueling as it was when Leach was the coach and I think my belief is largely because I think the Big 12 was very top heavy, but there was a lot of mediocre (teams similar to Texas TEch), games could go either way (Nebraska, Colorado, Missouri, and TAMU were anywhere between meh and pretty good, pretty good being Missouri). I think the offense was more of an aberration in 2017 rather than the norm (that’s the hope!). Thanks for Dallas for the post!