It’s still near the beginning of February, and our Red Raiders have already piled up 20 regular season wins. This is simply outstanding! We have passed the talks of “IF” we make the postseason, into discussing what our seed in the tournament will look like and how far will we go in the Big Dance. We are at that point in the season that it is a known fact out there in the nation that this team is ready for some big things to come.

Currently we have our eyes on the Big 12 Championship and the remaining 7 games on our regular season record. Let’s breakdown our remaining 7 games to see how Texas Tech can be the school to knock off the Jayhawk’s streak of supremacy at the top of the conference.

It is not going to be an easy task. Yet, with a 5 game win streak we seem to be rolling and finding our groove after the back-to-back losses on the road to Texas and Iowa State. Learning to play without Zach Smith in the lineup was challenging. The frontcourt still has issues, and is not our strong spot. Coach Beard and the team have had to throw multiple looks into the lineup, and make adjustments. Just like last night our Red Raiders seem to roll with a smaller lineup and make up for the lack of size with athleticism and grit.

Zhaire Smith has found his rhythm, and Jarrett Culver can score in waves after being inserted into the starting lineup. We have good depth on the roster, but right now the bulk of the minutes have falling to 8 guys. Evans, Culver, Zhaire, Gray, Odiase, Hamilton, Francis, and Stevenson. It is this core group that will need to keep staying locked in on defense to win the rest of the games on the schedule for us.

Here are the latest updates on the projections from TeamRankings.com on our remaining schedule odds of winning each game: 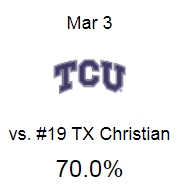 The next game at K-State is going to be a huge test, and it will not come easy. Same as a home match-up after that with OU. Right after those we go on the road to face Baylor and Oklahoma State. Wow, one tough team on our home court and three Big 12 teams on the road. It is not a fun thing, and this is going to be critical that we pull off a couple of wins away from Lubbock and protect home court against Trae Young and company in Lubbock. I think we can pull off 3 wins from those games, but there is a chance we drop two and our Big 12 title hopes will go down.

The last three games on the regular season will more than likely be the deciding factor on if we have what it takes to stay at the top as #1 in the conference. We get KU at home, and go on the road to WVU. Our senior night will end with TCU in Lubbock. Another stretch of extremely difficult games. If we can get to the KU game still having a shot at the Big 12 regular season title, than that game should be a classic. I believe we will be ready to kick some Jayhawk tail. When is the last time a Big 12 school can say they went undefeated during the regular season to KU?

Going into Morgantown has got to be the hardest game left on the entire rest of the remaining games. We will need to be playing lights out in that one against WVU. By the time we play TCU to end it all, we should know where we are going to fall in terms of the Big 12.

With looking at that, it gets you excited for the rest of February. We can go out swinging to end the season, and cause some real damage. Though I would like us to keep rolling at the top and be crowned Big 12 champs. It is just getting started our journey from the bottom to the top. We have a long month to go. Yet, one thing is for sure… it will be damn entertaining to watch what we can do. Wreck ’em Tech!!!