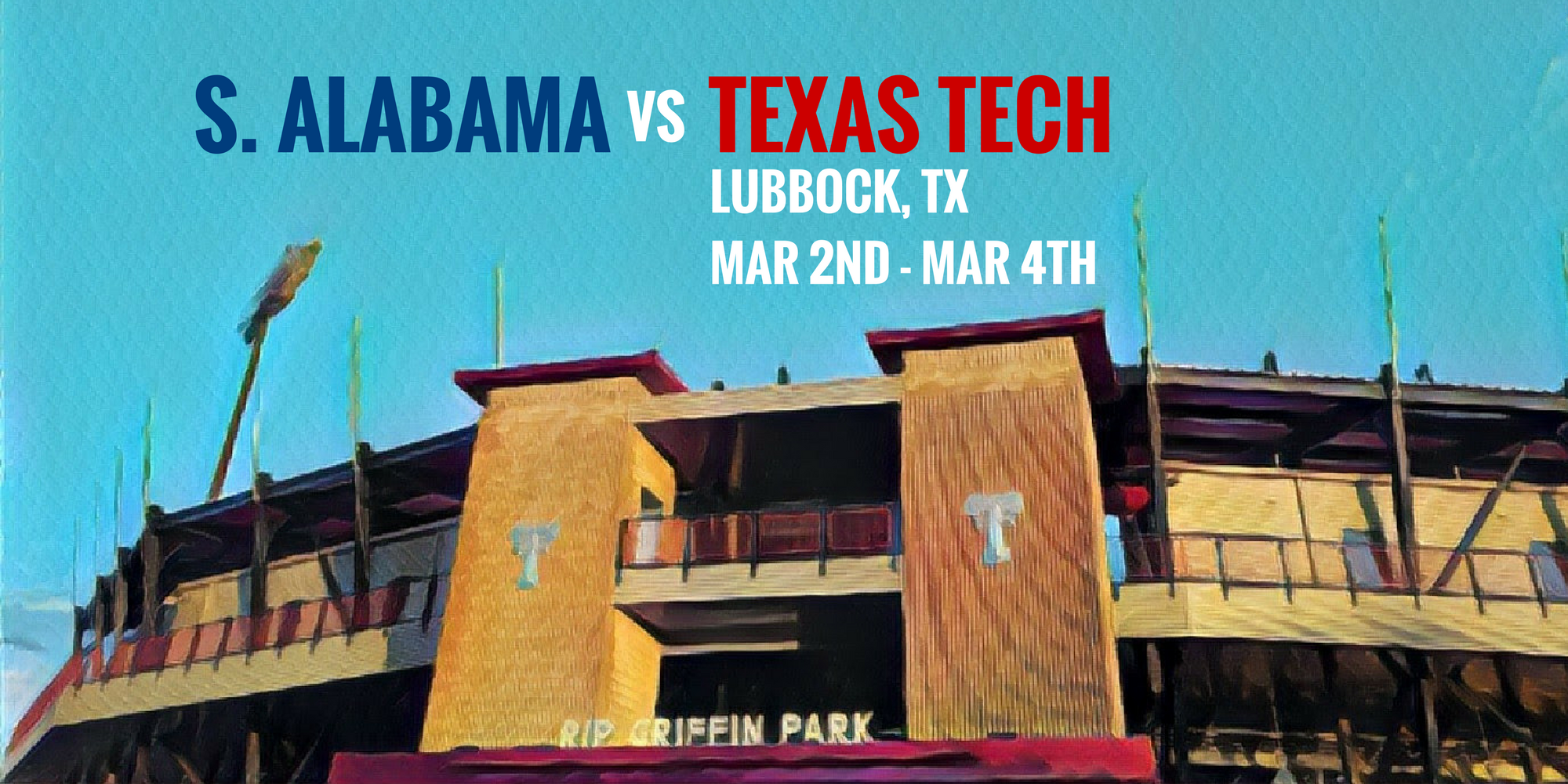 Hey you probably didn’t know this, but South Alabama is actually really good at baseball, ranked in the top 25 of all two of the polls and they id it largely on beating two Big 12 teams. The Jaguars started by playing at a round-robin tournament where they played Kansas State, Oklahoma, Virginia Tech and Indiana, where they got victories on the first 3 opponents, while dropping to IU. They then played a mid-week game and beat Southern Miss at home, while sweeping Hartford last weekend. The last game they played was on Tuesday, where they lost to Auburn at home. South Alabama started that initial tournament and then they’ve played the rest of their games at Stanky Field (yes, Stanky).

And let’s note the starting pitchers because this is a break from the initial two series, where Dylan Dusek will get the third start of the series and we’ll find out who the fourth starter will be on Sunday. Erikson Lanning I guess has been demoted and he hasn’t been very good, unable to get out of the third inning in both of his outings.

Texas Tech also knows its pitching staff has been more than stellar, giving up seven total runs in the past five games. Six of those runs were allowed in a 10-6 win over UT-San Antonio back on Feb. 26

“Obviously our pitching has been remarkable over this past couple of weeks,” Texas Tech Grant Little said. “They’ve been a big part in all of those wins. Offensively, last week, we could have been better. But we’re lucky our pitching staff kept us in all of those games. Without them, we might have dropped one or two. They really set the tone for us.”

“It’s a great opportunity for us,” South Alabama coach Mark Calvi said. “Our guys know they’re playing a great team and we want to go in there and play well and win some games.”

South Alabama is coming off a disappointing loss on Tuesday to No. 18 Auburn, a game in which the Jaguars left 11 men on base and struck out 12 times. USA had the tying and go-ahead runs on base in the eighth inning, but could not push them across.

Texas Tech comes in tied for eighth nationally in earned run average (1.89) and 14th in runs per game (9.1). The Red Raiders have outscored their opponents 82-21 this season.

“They’re 9-0 and ranked third in the country for a reason,” Calvi said. “They have a lot of guys back from a team that was touted to go to Omaha (for the College World Series) last year, but got upset. … They’re going to be a top three team in the Big 12 this year.” 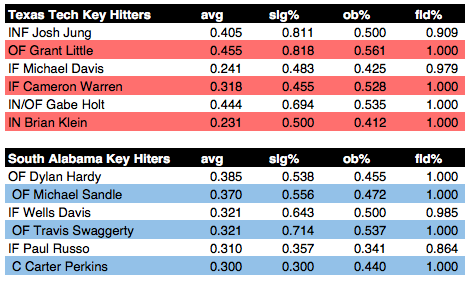 Davis Martin (3-0) went a solid 5 innings, in trouble a bit early, but was cruising at the end of his night, giving up just 2 hits, 1 run, 3 walks and striking out 4. Dane Haveman (JUCO from Hill College) pitched the 6th and 7th without allowing a hit, but did walk 3 and struck out 5, while Connor Queen (JUCO from Odessa) pitched the final 2 frames without a hit, walking 1 and striking out 1.

And as an aside, South Alabama, which is a very good hitting team was reduced to 2 hits and the only run that scored was because of a passed ball.

Another quality start by John McMillon (3-0), who had some control issues with 6 walks, but had 5 strikeouts, only allowed 3 hits, 2 runs and had 95 pitches before calling it a day after 5. The bullpen was again lights out, Caleb Kilian pitched the 6th, 7th and 8th, allowing just 1 hit, walking none and striking out 3, while freshman Nick Candelari got back on track pitching the 9th, walking 9 and striking out 2.

The offense definitely separated balls from strikes, pounding out 16 hits and walking 9 times en route to demolishing South Alabama. There were 7 players who had multi-hit games: Gabe Holt, Josh Jung, Brian Klein, Grant Little, Michael Davis, Cameron Warren, and Cody Farhat (one of those hits was a home run).

A combo of Dylan Dusek and Ty Harpenau, who each went 4 innings, were pretty good, Dusek going 4 giving up 4 hits, 2 runs, walking just 1 and striking out 7. I’m really encouraged with Dusek getting some extended work because it’s been a while since he’s seemingly done that. Harpenau was even better with his 4 innings, allowing just 1 hit, walking none and striking out 6. Dane Haveman got the save pitching the 9th, allowing just a hit and a walk. Just in case you’re wondering, that’s 13 strikeouts ot just 2 walks for these pitchers.

This was the lowest scoring game of the series, Texas Tech would score 1 in the 2nd, 1 in the 4th and 5th, and 2 in the 6th. Brian Klein went 3-4 with 2 RBI and Gabe Holt and Grant Little both had 2-hit games.

Freshman Ryan Sublette got his first start of the year and it was okay. He went 3 innings, giving up 2 runs, 2 hits, walking 3 and striking out 2. Jose Quezada pitched the 4th and 5th innings, allowing just a run off of 2 hits, walking 2 and striking out 2. Things got a little dicey at the end of the game. John Henry Gonzalez went 1.2 innings and allowed a run on 2 hits with a walk and a strikeout while Caleb Freeman pitched the final 1.1 innings allowing 3 runs, off of 2 hits, 3 walks and just 1 strike. Tough outing for Freeman for sure..

Cam Warren has continued to hit really well, he wen 3-3 today with an RBI and 2 doubles, while Gabe Holt, Josh Jung, Grant Little, and Michael Davis all had multi-hit games. Davis went deep on one of his 2 hits with 2 RBI and Grant Little started with a home run in the 2nd inning.