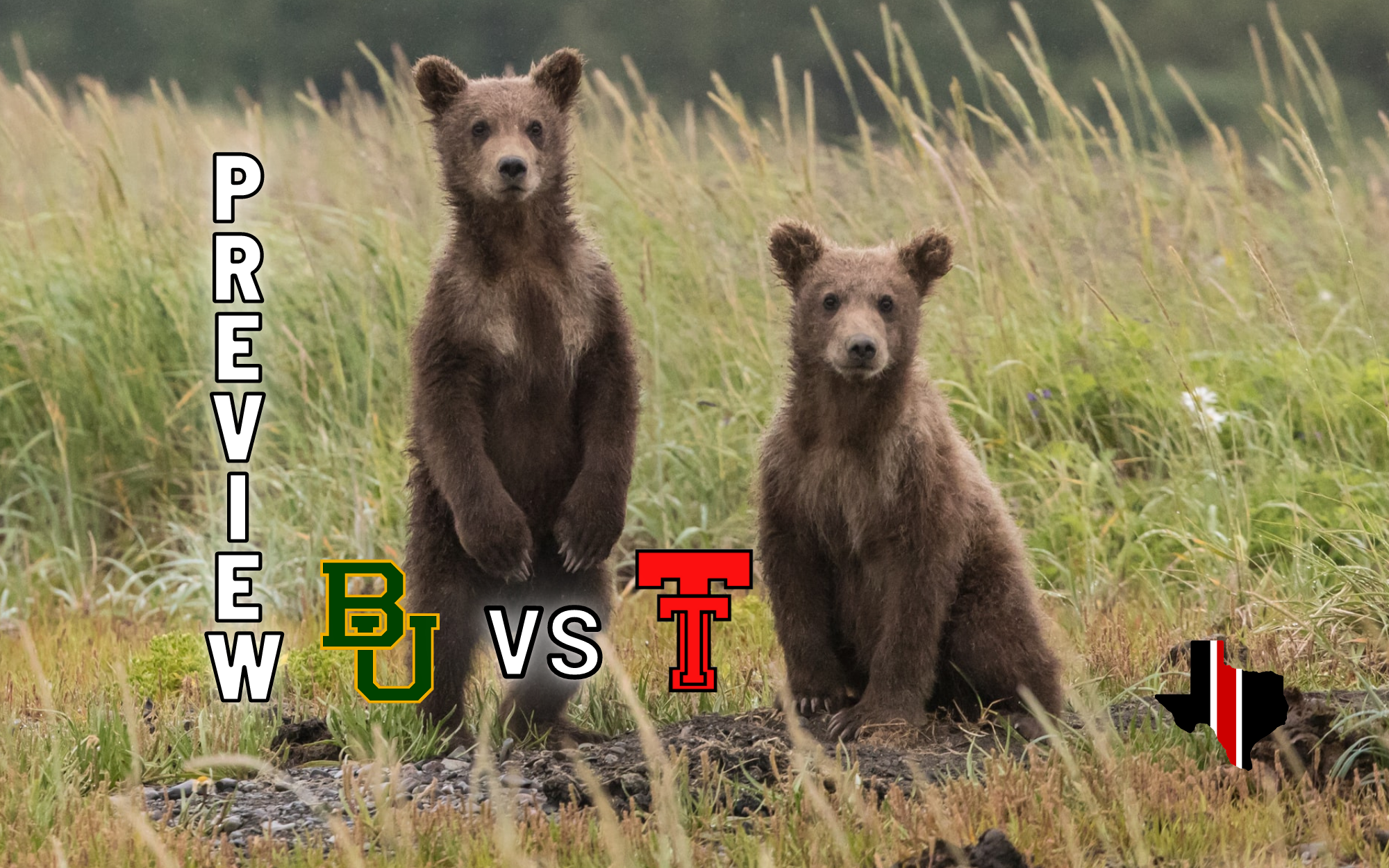 It’s a game. A game against Bears.

Before we get going, it should be noted that leading rusher RB Craigh “Sqwirl” Williams and leading tackler LB Terrel Bernard are not out for the season.

1. RB John Lovett (6-0/212, Sr.): I think that Lovett sat out last week, so not a full slate a games, but with Williams out, I’d think that Lovett gets a pretty heavy dose at running back. Lovett has just 36 carries for 125 yards thus far, averaging about 3.5 yards a carry and 9 carries a game for 31 yards a game. He’s caught the ball 6 times out of the backfield for 32 yards, so about 5 yards a catch.

2. S Jalen Pitre (6-0/200, So.): Pitre is the second leading tackler, averaging 6.4 tackles a game, has 6.5 tackles for a loss (which is impressive for a safety), and 1 pass broken up. I’m guessing that Pite mainly supports the run and appears to do a nice job of that.

3. QB Charlie Brewer (6-1/210, Sr.): Brewer has maybe gotten worse as a quarterback, completing just 62% of his passes for 1,125 yards, 6.5 yards per attempt, 11 touchdowns, and 5 interceptions while averaging 225 yards a game. He’s also run 50 times, but is averaging less than a yard a carry, so he’s not a huge threat to run, but he can. The yards per attempt has gone down from 8.1 last year to 6.5 this year. His arm strength just doesn’t appear to be there this year and am not sure why.

4. LB William Bradley-King (6-4/248, Sr.): Bernard really did it all and it appears that Bradley-King is maybe the next best guy that gets to the quarterback. His size is the exact type of player that gives Texas Tech tackles fits. Bradley-King averages about 3.8 tackles a game, has 4.5 tackles for a loss, 2.5 sacks, has broken up 3 passes, and has 3 quarterback hurries to go along with a forced fumble.

The game starts with a Baylor pick, that defensive back did a nice job of playing the ball for sure and has a big old club of a hand . . . Brewer makes a nice pass right into the soft spot of the zone and I’d guess that this is what he does best . . . the touchdown by Baylor is also a nice play and one where Iowa State just loses the receiver in zone coverage . . . another pick for Baylor, a tipped pass and opportunity knocks . . . another zone touchdown (note to self – don’t do zone stuff in the end zone) . . . Brewer having to throw across his body just didn’t work out, and with the pressure and he thought his arm was good enough, but it clearly was not . . . the run to the edge was a clear indication that Baylor got sucked in with the run . . . a third interception for a touchdown, the Baylor defensive back does a nice job of jumping that route . . . definitely pass interference, don’t even play . . . goodness gracious, another Iowa State turnover and I’ll have no idea how Baylor ends up losing this game . . . getting tight ends one-on-one with a small cornerback is a good play . . . Baylor has a tough time getting to the edge for sure . . . Brewer should never run the ball. Ever . . . the interior Baylor defense really seems fine . . . oh, a blocked punt by ISU and that was a bad deal . . . beware of the Baylor slant, that’s some quickness from the receiver . . .

The average scoring margin between the two teams is -0.2 for Baylor compared to -12.7 for Texas Tech, which means that Baylor is generally keeping games close, while Texas Tech is not.

There was a tweet that was posted by Red Raider Sports that is now deleted, that said that sources said that Texas Tech intends to play both Henry Colombi and Alan Bowman. This probably isn’t going to go over well, but I do think that’s probably the right idea. The deal is that both quarterbacks are flawed and maybe this is one of those situations one might be able to do something the other cannot.

I also mentioned last weekend that what brings a team out of the lower tier of programs is a star quarterback and we haven’t seen one for Texas Tech thus far this year. That’s not to offend either, but they are serviceable at best.

If you don’t have a quarterback that can threaten opposing defenses then the offense isn’t going to go well.

Remember that second year bump on offense that we were sort of promised by Yost? Well here we are and there’s no bump and I think the lesson learned here is the if you’re going to go after a quarterback, that quarterback probably needs to be dynamic in some form or fashion, mostly with your arm.

And if you need proof of an inept offense, well, look no further in that Texas Tech is one of the worst offenses in the nation in finishing drives and creating scoring opportunities. This offense is statistically terrible (and probably visually as well).

As far as this game is concerned, I think that the offenses are similar in that they aren’t necessarily great, but Baylor has the better defense. In fact, StatsOWar is predicting a 10 point win for Baylor.

And Bill Connelly is not much better.

I think the Texas Tech defense is better than most give them credit for and the problem is that they end up being on the field for an eternity and they simply wear out and give up a ton of yards.

Since this is basically a pick-em game, although the spread has flipped from Texas Tech being favored by 1.5, now Baylor is favored by 1.5. I’ll take Texas Tech for no real reason and have no reason to believe that the offense is going to put up significant points. With dueling quarterbacks for Texas Tech, it’s likely to be problematic.