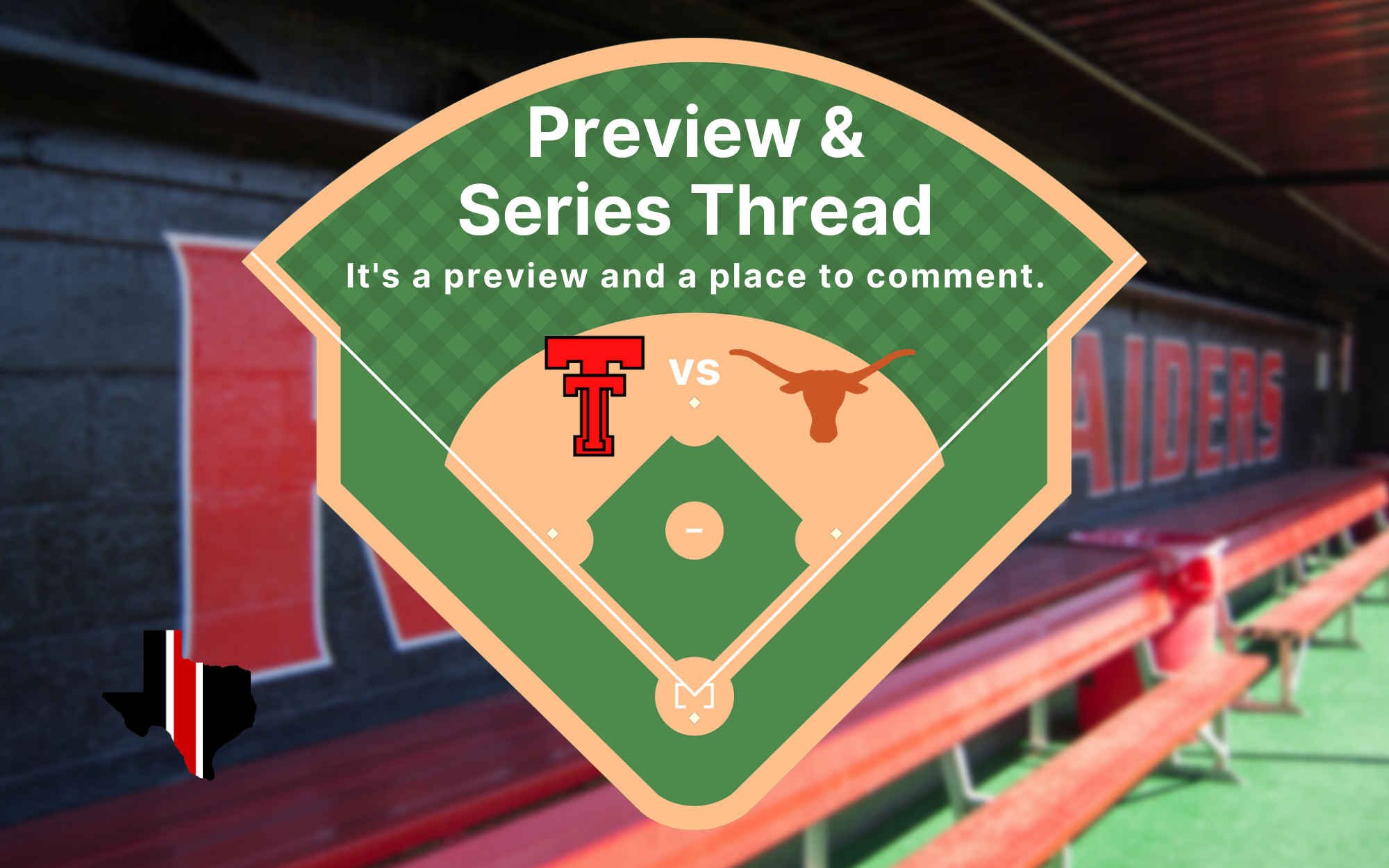 Just a little scheduling alert, which is that the normal Friday night game is moved up to 2:00 p.m. today.

INSIDE THE SERIES
Friday’s meeting will be the 166th all-time between the two programs, who have met annually since 1968 up until the 2020 COVID-shortened season. The Longhorns hold a 116-49 lead in the all-time series, including a 56-22 lead in Austin. The Red Raiders, however, have won three of the last four series in Austin under head coach Tim Tadlock.

LAST TIME
The in-state rivals last met up in 2019 as the No. 7 Red Raiders traveled to Austin to open Big 12 play with a top-10 showdown against No. 10 Texas. With the Red Raiders in town, Texas saw 7,879 fans attend the opener for the fourth-highest attended game ever at UFCU Disch-Falk Field. Despite outhitting Texas, 22-10, for the series, the Red Raiders dropped one-run battles in the opener and in the finale, allowing the Longhorns to claim the series win.

A LOOK AT THE LONGHORNS—Texas improved to 23-2 at home this season after a 5-3 win over UIW at UFCU Disch-Falk Field on Tuesday night. The duo of Ivan Melendez and Zach Zubia lead the Longhorns offensively. Melendez leads Texas with nine home runs and is hitting .352 with 39 RBI, while Zubia has a team-leading 40 RBI with six home runs and a .466 on-base percentage. On the mound, Ty Madden (1.68), Pete Hansen (2.19) and Tristan Stevens (2.74) all rank in the top seven in ERA in the Big 12 Conference, while Stevens’ seven wins are tied for third-most in the nation. Texas is 34-6 over its last 40 games and tied for first in the Big 12 Conference at 12-3.

MOUND PRESENCE—The Texas pitching staff has been among the most dominant groups in the nation, with the fifth-best ERA in the nation at 2.87, a mark that leads the conference by 0.61. Three Texas starters rank in the top-seven in the Big 12 Conference in earned run average, with Ty Madden holding down the second spot with a 1.68 ERA. Pete Hansen sits fourth with a 2.19 ERA, while Tristan Stevens’ 2.74 ERA ranks seventh.

Tech starter Patrick Monteverde allowed two earned runs on four hits as he dealt into the fifth inning, outdueling potential first-round pick Ty Madden for the Longhorns. Tech scored all six of its runs against Madden (6-2), matching his career high in runs allowed.

Sublette (6-1) spelled Monteverde in the fifth and retired eight of the 10 batters he faced to maintain the three-run advantage through seven. Three different freshmen combined to keep the Horns off the board in the eighth, and Connor Queen took over to close out his fifth save of the year.

After play was suspended Saturday afternoon due to rain with a 5-3 Texas Tech lead, the No. 11 Red Raiders returned on Sunday to record the final four outs and pick up a 5-3 victory over No. 3 Texas to secure the series win at UFCU Disch-Falk Field in Austin, Texas.

The Red Raiders (30-10; 10-7) will go for the sweep against the Longhorns (34-11; 12-5) later in the day after closing game two by stranding the bases loaded with the final out of the eighth before recording three more outs in the ninth.

The win gives Tech its fourth series win in Austin in five tries under head coach Tim Tadlock. It is the first series loss of the season for Texas as it falls to 23-4 at home with half of their home losses coming this weekend.

The Red Raiders struck first in game two with a five-run sixth before the Longhorns rallied with a run in the seventh and two in the eighth before play was suspended.

The two clubs returned to the field on Sunday with the Red Raiders clinging to a 5-3 while the Longhorns threatened to tie or take the lead with the bases loaded and two away. Tech went to Ryan Sublette, who tossed 2.2 shutout innings in the win Friday, looking to survive the threat, and the junior needed just three pitches to sit down pinch hitter Silas Ardoin.

After an emotional series-clinching victory to start the afternoon, No. 11 Texas Tech dropped an 11-3 decision to No. 3 Texas in the series finale Sunday at UFCU Disch-Falk Field in Austin.

Texas overcame a 2-0 deficit early on with four runs in the second and held a 7-2 advantage in the seventh when Douglas Hodo III connected on a grand slam to make it a nine-run ballgame.