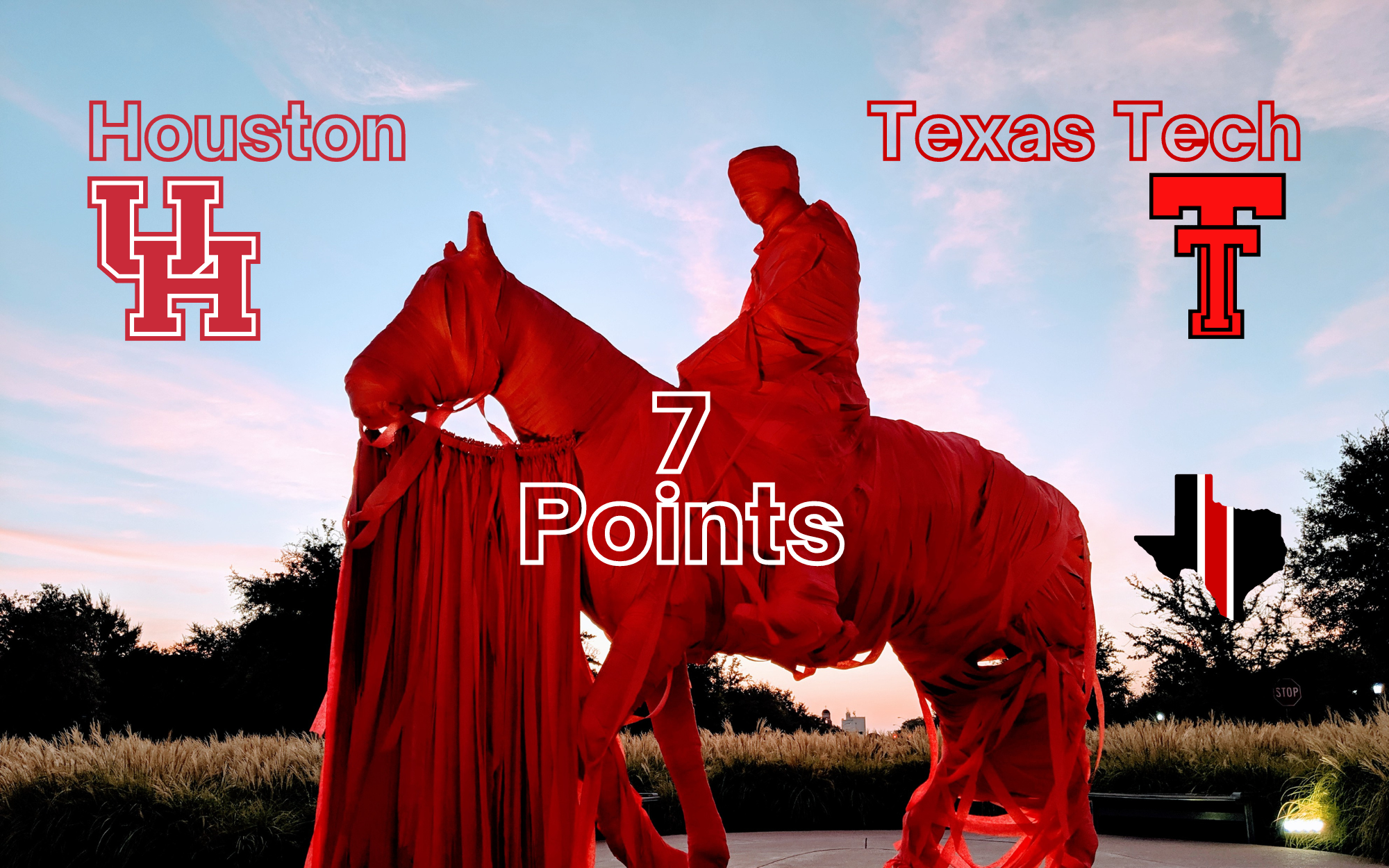 Advanced Stats: These two teams are about as even as you’ll see. 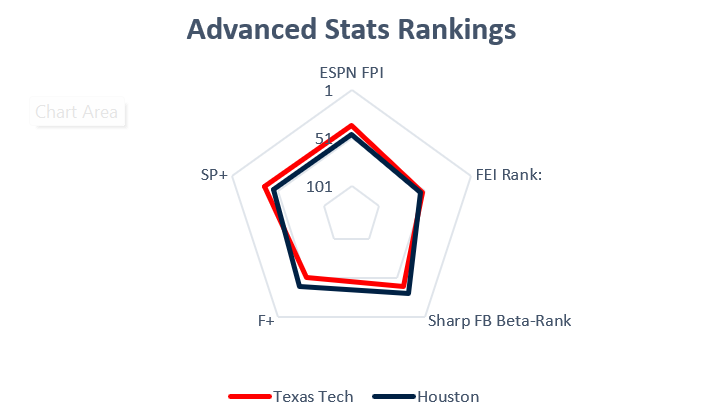 Texas Tech Offense vs. Houston Defense: The run efficiency for the offense probably needs more data is my guess (which could also be said about the data below) and find it strange that it ranks so low. The Houston offense is pretty balanced overall, maybe not excellent at running or passing, but top third in the nation. 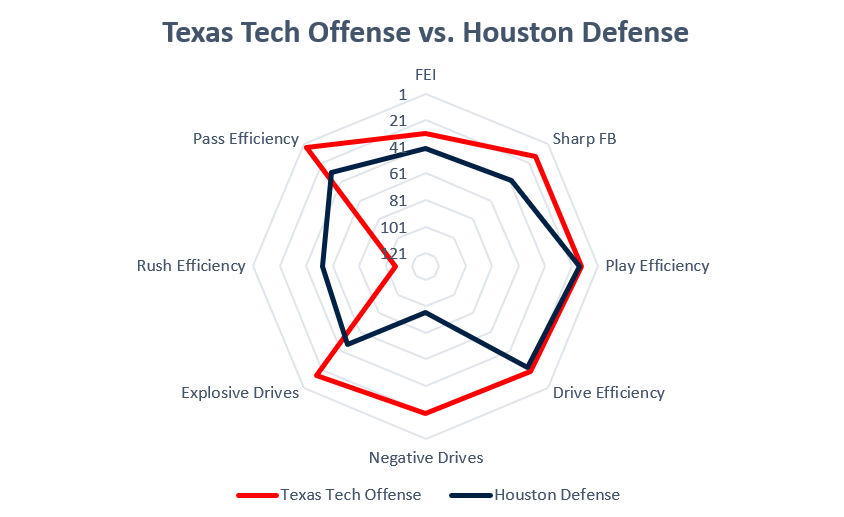 Texas Tech Defense vs. Houston Offense: FEI doesn’t think that Texas Tech’s defense is for real (which is fine, I want to see it against better competition too) but the other metrics do slightly favor Texas Tech with the negative drives being the biggest discrepancy. 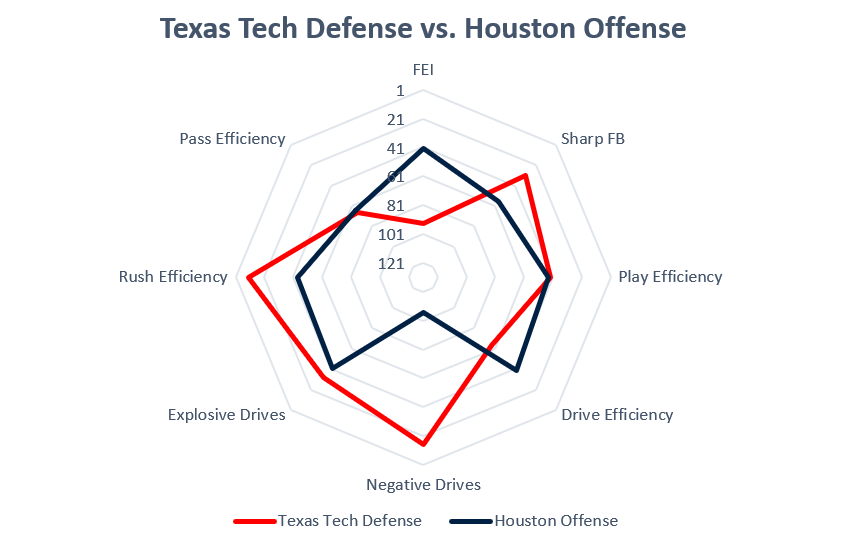 I was listening to the Troy Aikman Show on The Ticket on my way into work and one of the things that he said was that your offense is as good as your 3rd receiver and maybe nowadays, that’s as good as your 4th receiver. Go down the line of receivers, whether it be wide receivers or tight ends and there’s no shortage of talented big players that can change the course of a game. And last week, the best receiver, arguably, Myles Price, didn’t catch anything until the second half. Loic Fouonji, Jerand Bradley, Cleveland, Teeter, Tharp, Cupp, etc. There are just too many of them. Houston doesn’t have a small defensive backfield, but Alex Hogan is a 5’11” cornerback, Hasaan Hypolite is a 5’11” safety, Art Green is a 6’2″ cornerback, Gervarrius Owens is a 6’0″ safety, and Jayce Rogers is a 5’8″ nickelback. Size, speed, and skill are a game-changer and I’m not sure who covers 6’5″, 6’4″, 6’5, 6’8″, etc. And before last week, I wasn’t sure what Texas Tech had, but now I’m more sure that the receiver room is fine.

Key #1: Contain Tune: Tune is definitely the straw that mixes the Houston offense’s drink. The weird thing is that he was fairly pedestrian in quarters 1 through 3 against UTSA, but exposed in the 4th quarter and beyond. And maybe that’s because UTSA held Houston’s running attack for those first three quarters and things finally opened up for Tune. The little things that the coaches discussed after the game, which is that if you’re going to rush, you have to contain and there were examples of how when that didn’t happen that Murray State made big plays.

Key #2: Let Smith Run: There’s an inherent risk in letting Donovan Smith run the ball since starting quarterback Tyler Shough is out, but against UTSA Frank Harris was the leading rusher, 8 for 63 yards and my guess is that kept Houston really honest and if you watch some of the highlights, UTSA’s receivers are having a ton of success on the Houston defensive backs in terms of blocking. And I think Houston is going to give up the short passes, they definitely did that against UTSA, keeping things in front of them and forcing the Roadrunners to take the short stuff. And as an aside, Houston was very good at keeping things underneath.

Key #3: Be Tight Against the Run: UTSA limited Houston from running the ball really well. They were excellent up front and I think that Dana Holgorsen wants to run the ball, 44 total rushing attempts to just 32 pass attempts. Texas Tech was excellent stopping the run last week and that will be tested against a much better Houston team.

What happened to the Texas Tech ex-pats? Alex Hogan, Ta’Zhawn Henry, and KeSean Carter are with the Cougars and they play important parts of the Houston team. Henry ran for 513 yards on 111 carries last year for 4.6 yards a carry and 7 touchdowns. Carter was one of my favorite players and thought for sure that he’d absolutely explode at some point, but he’s managed about 25 to 30 catches a year for somewhere around 10 yards an attempt without a ton of touchdowns. Hogan had 27 tackles last year, 2 picks and probably starts for Houston.

Dallas Morning News’ Ryan Mainville: Texas Tech prediction: Can the Red Raiders make it five in a row over the Cougars?

In September 2021, Texas Tech athletics director Kirby Hocutt said he and Texas AD Chris Del Conte had discussed the idea of the Red Raiders and the Longhorns continuing to play in all sports, especially football, for 20 to 25 years after UT leaves the Big 12 for the Southeastern Conference.

Not only did they discuss it, Hocutt said, but UT leadership affirmed they would work with Tech to make sure the football series played annually since 1960 would continue.

A year later, Tech officials are anxious that there’s been no movement on that front. They say they believe UT leaders have told Longhorn alumni groups that there are no plans to continue a series with Tech.

“As I’ve talked to my counterpart at the University of Texas,” Hocutt said, “while all the right things have been communicated to me, it’s concerning that in the last couple of weeks I’ve heard from individuals in Dallas, in Fort Worth and in Midland that there’s different things being said from those folks representing the University of Texas and that a scheduling alliance against Texas Tech is not going to happen.”

I took Texas Tech last week and have no reason to change my mind. I’ll take the Red Raiders to win and Texas Tech to cover. I think Texas Tech has more dynamic players and the defenses are comparable.