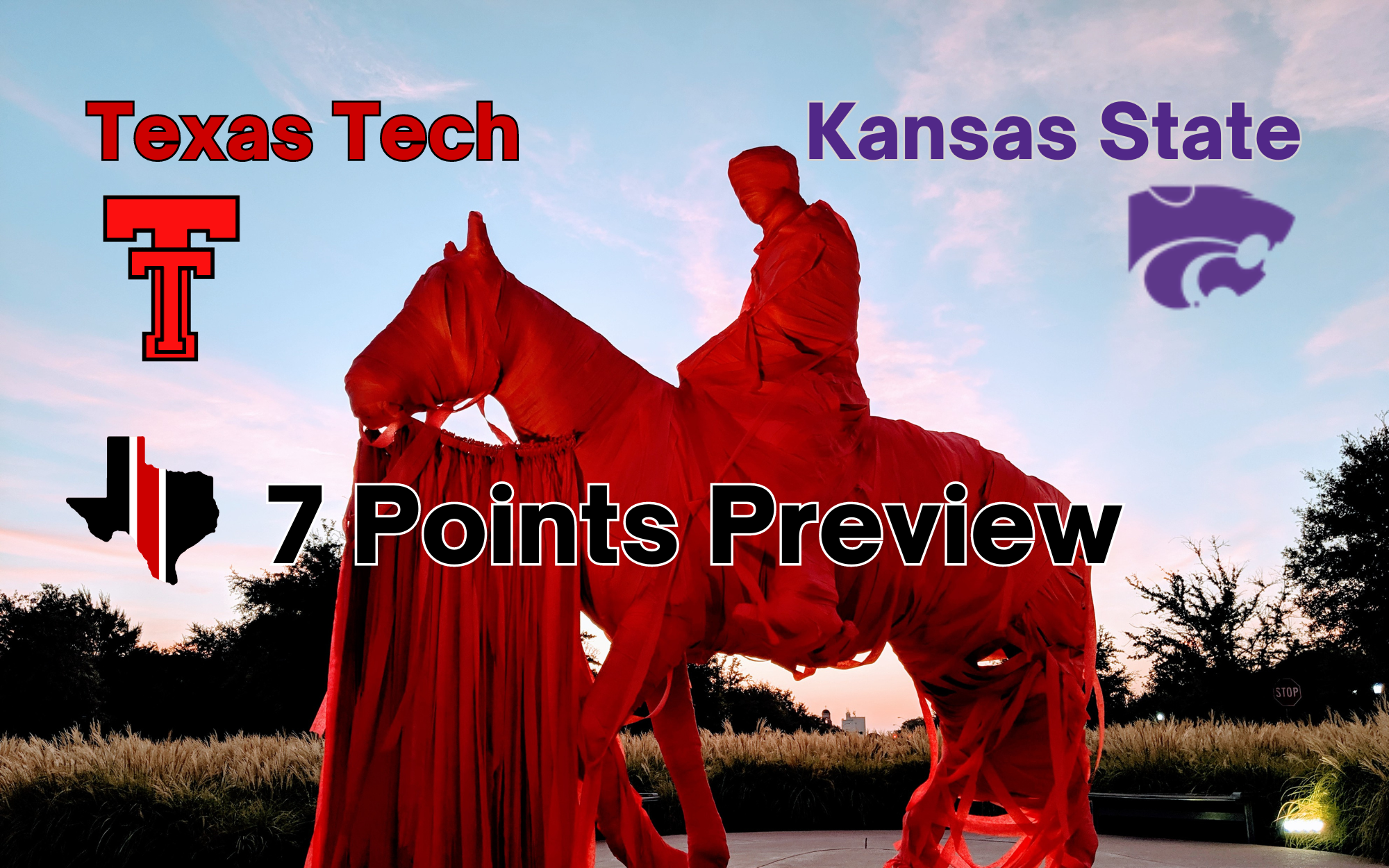 It’s a big game in Manhattan.

Advanced Stats: A lot like last week, just about every advanced stats person things that Kansas State is simply the better team . . . except for Sharp Football, which has Texas Tech pretty well even with the Wildcats. 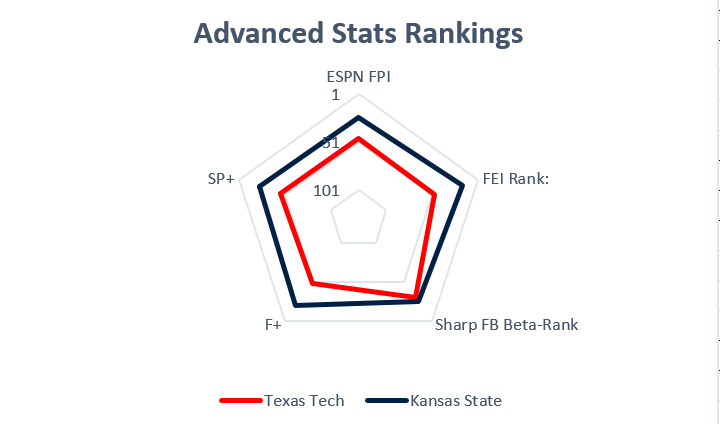 Texas Tech Offense vs. Kansas State Defense: Kansas State’s defense is pretty darn salty all the way around. Not a ton of huge holes defensively and there are two advantages, which is that Texas Tech is good at sustaining drives and good at passing the ball where the Red Raiders have a decent advantage there. 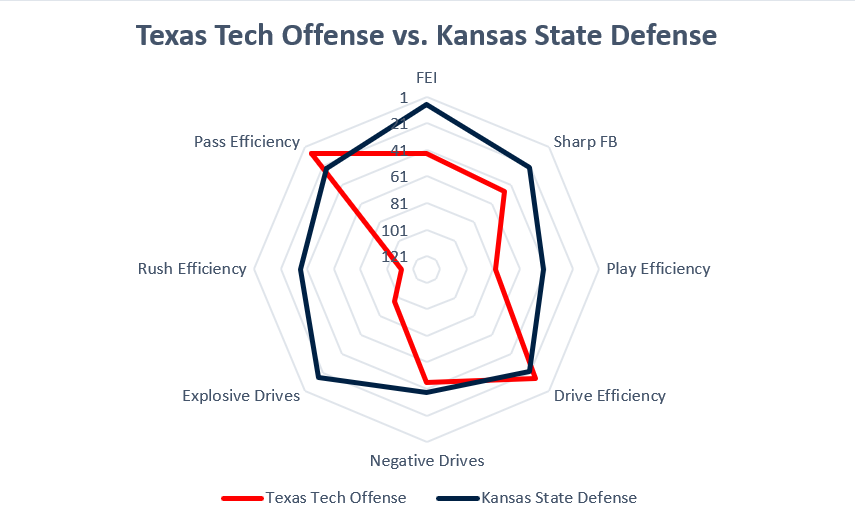 Texas Tech defense vs. Kansas State Offense: What a beautiful graph. If it is not clear, Kansas State is not, thus far, a good passing team and Texas Tech’s defense has been pretty good thus far, best in forcing negative drives and stopping the run. Just so happens that Kansas State is very good at running the ball, so this will probably be the biggest key to the game. 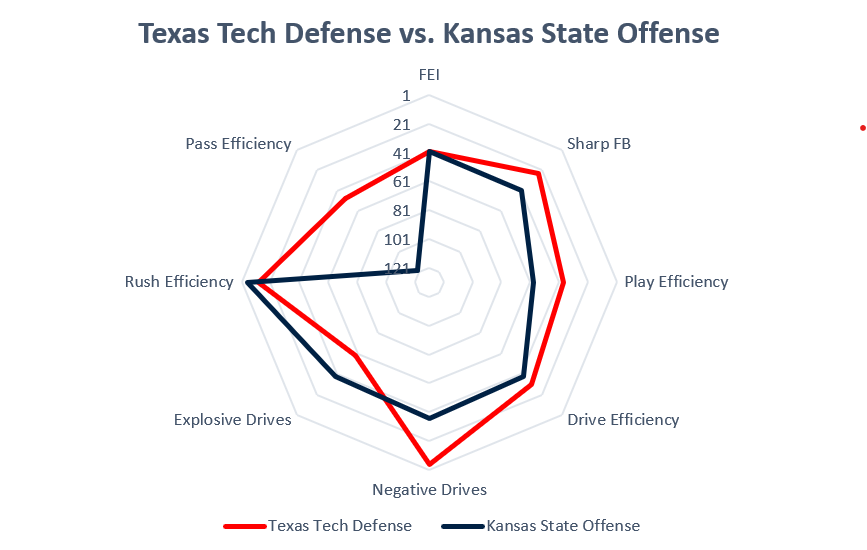 Deuce Vaughn vs. Linebackers. Deuce Vaughn is averaging 117 yards a game, 5.4 yards a carry to go along with 3 touchdowns. Vaughn isn’t necessarily involved in the passing attack, but interestingly the offense stalled against Tulane where he caught 8 passes for 30 yards. That’s not the high-end production that we’re used to seeing.

Big Receivers vs. Big K-State DB’s. The big outside receivers haven’t had breakout games and I don’t know if that will happen this week either. The Kansas State cornerbacks are all over 6-foot, so this isn’t a situation where the Big guys will be able to feast. Maybe this is another opportunity for Myles Price and Nehemiah Martinez to wreck shop again.

A Tight End Battle. Ben Sinnott was instrumental against Oklahoma where he caught 4 passes for 80 yards and he’s a tough runner.

Key #1: Adrian: Adrian Martinez has run for 100 yards a game the past 3 games and he probably could have done that in the first game against South Dakota. The passing is the thing that Martinez doesn’t do great is passing and it’s not that it is bad, but he’s not great. For the year, Martinez completes 64% of his passes, but only 5.6 yards per attempt. That’s where he’s dinged statistically, it’s the short stuff that he’s completing.

Key #2: Offense Unleashed: I thought that one of the best things that Zach Kittley did as an offensive coordinator is that he told Donovan Smith that he had to get rid of the ball sooner and he had to run as the opportunity arises. I think the idea is that sacks are half on the offensive line and half on the quarterback to make quicker decisions. Kittley adjusted accordingly and so did Smith. I think that the best part of what Smith did is that he ran 15 times for 42 yards and they weren’t junk yards without meaning within the offense. Smith being engaged in the running game, looking for opportunities, and a shortened passing game will probably be the best offense against Kansas State.

Key #3: TO’s & TOP: We talked about turnovers last week and we’ll talk about them again. Kansas State is 11th in turnover margin, but the most interesting part of that statistic is that K-State only 1 lost turnover all year long. That’s pretty well insane, especially when you consider that Texas Tech has turned the ball over 8 times. I’d also add that it appears that a big part of the Kansas State is 20th in the nation in time of possession, nearly 33 minutes a game. Low (i.e. 1) turnover and time of possession seems like a pretty big part of the Wildcats’ game.

Who’s Watching Knowles? Malik Knowles really does it all for Kansas State. He’s the lading receiver with 14 catches for 144 yards and a touchdown. He’s got 1 rushing attempt for 75 yards and a touchdown. Knowles averages 34 yards a kickoff return. No matter where Knowles is, Texas Tech would be well advised to keep track of Knowles.

Position reviews from the Texas game (I actually remembered!).

Uniforms this week. All white.

The line started at Kansas State -8 and now it’s moved to -7.5. I’m still good taking those points and Texas Tech, but I’m not as confident about beating Kansas State in Manhattan. Texas Tech is 0-6 straight up against Kansas State, 2-17 straight up in the last 17 games on the road, and 0-4-1 against the spread their last 5 games against kansas State. I’ll take Kansas State to win 35-32.