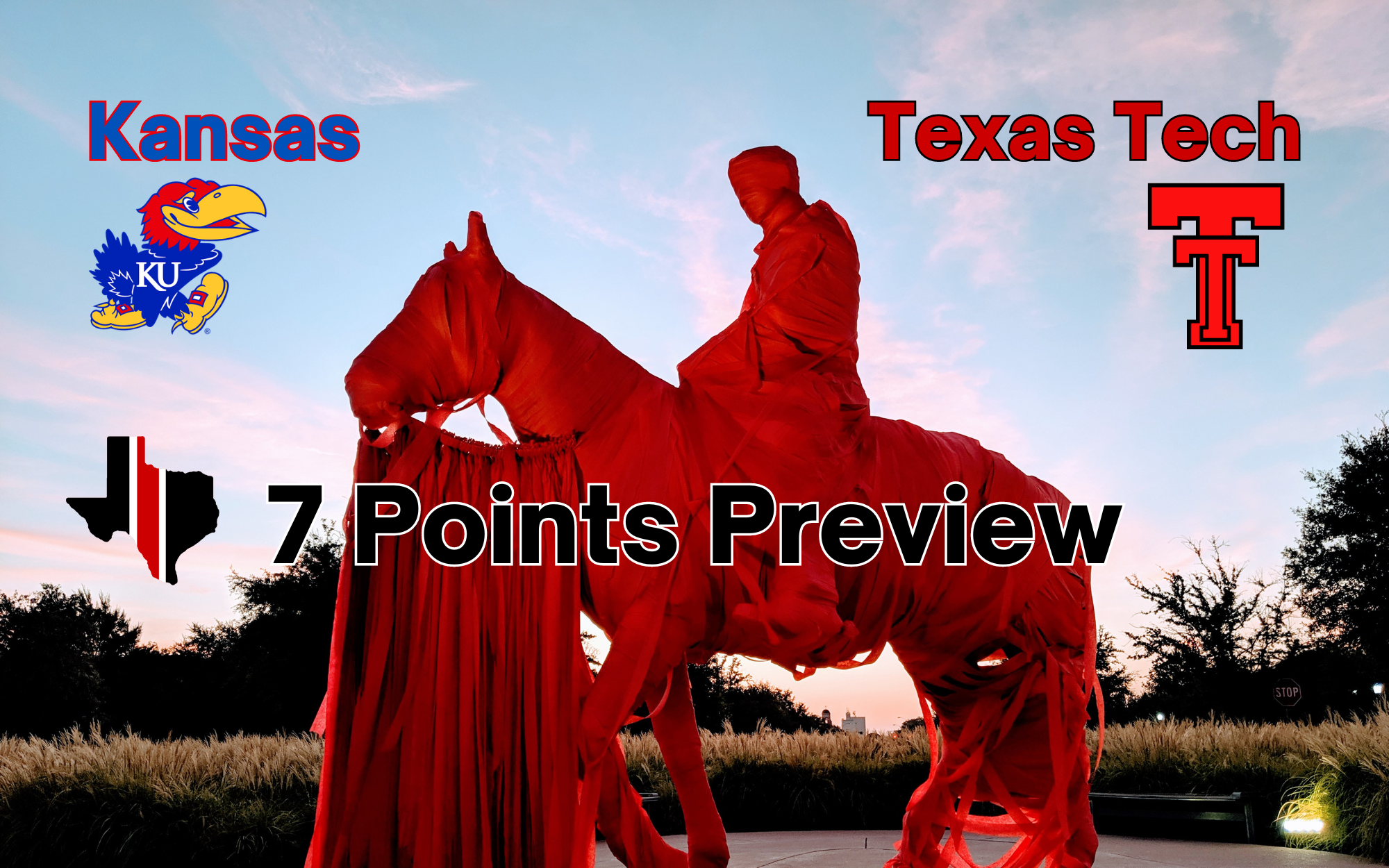 Advanced Stats: It seems as if these reams are pretty even for advanced stats with Sharp still having Texas Tech ahead. 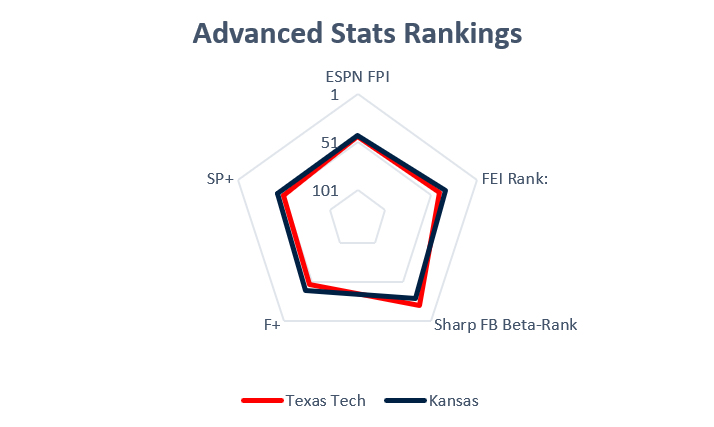 Texas Tech Offense vs. Kansas Defense: The Kansas defense is pretty bad, except for the rush defense, maybe a lot of ways to take advantage of Kansas. It appears that the key will be to grind out those plays, convert third downs and score some danged points. 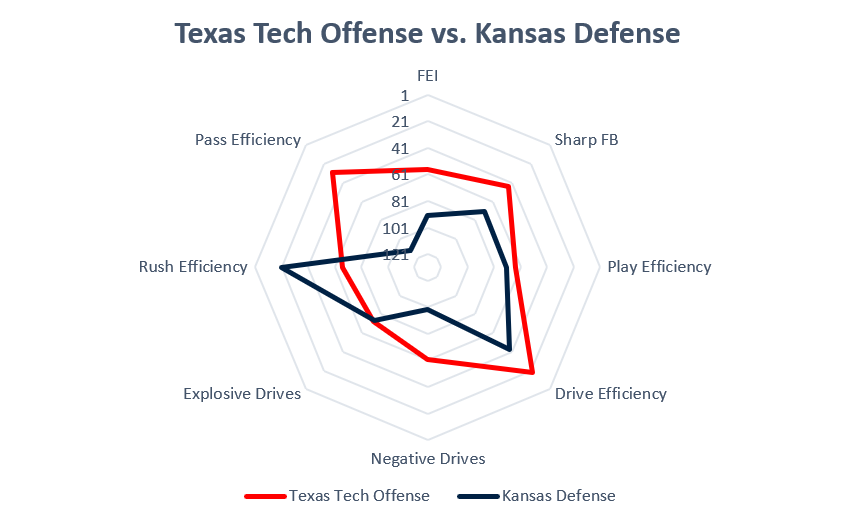 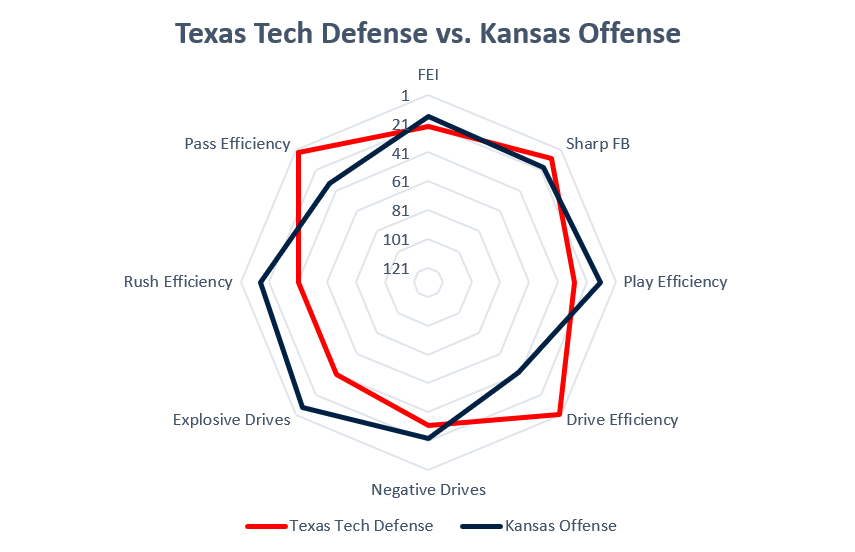 Anyone at Quarterback: It won’t really matter who plays at quarterback for Kansas, but Jalon Daniels and Jason Beam have incredibly similar stats, completing 66% of their passes, averaging over 9 yards an attempt, have thrown a combined 4 interceptions and the coaching staff appears to trust Daniels a bit more as he is given 19.5 attempts a game to Bean’s 12.9.

Blocking Lonnie Phelps: With a beat-up offensive line, the focus will be on Kansas’ version of Tyree Wilson, Lonnie Phelps, who has 40 tackles, 8.5 tackles for a loss, 6 sacks, 2 quarterback hurries, and a pass break-up.

Stop Devin Neal: At running back, Devin Neal ran for 224 yards and caught 6 passes for 110 yards. Basically last week, Neal and Bean were the offense for Kansas. Prior to Neal’s big receiving day, his high for receiving yards was 17 for a single game. And prior to the 224 rushing yards last week, the rushing high was 108 against Tennessee Tech and then the second highest was 88 yards against Oklahoma.

Anyone at Quarterback, Part II: Tyler Shough or Donovan Smith. Whoever is at quarterback, the turnovers, or the need to have none, is going to be a point of emphasis I’d think. Kansas is a low turnover team and Texas Tech is not. And Texas Tech is going to have an advantage because Kansas isn’t great against the pass, but you’ve got to do it in a way where there aren’t any turnovers.

Do Something: I feel like there’s a meme that has a guy poking a stick at something and pleading with this thing, maybe on the ground or dead to “do something”. I sort of feel that the offense needs to be a bit more than what they haven’t been. And guys need to “do something”. We’ve seen the defense have guys that step up and make plays and I feel that there needs to be guys that step up and play bigger than what they’ve been.

Key #1: Slow the Passing: It’s not the passing yards, where Kansas is 76th in the nation, but the efficiency, holy smokes, the efficiency. Kansas is 5th in the nation in passing efficiency and for comparison purposes, last week TCU was 4th, so they are/were good too. What makes Kansas so good is that they just don’t turn the ball over4 interceptions on the year and 22 touchdowns. And that is why the passing game, as good as it can be, is not efficient, which is 16 interceptions on the year to 21 touchdowns. For Kansas, it doesn’t matter who is at quarterback, each one can or is capable of playing really well.

Key #2: Hold on 3rd: Another reason why a team is particularly efficient is because of converting 3rd downs, where Kansas is 8th in the nation, converting 52.4% of all third downs keeps the offense on the field and it doesn’t hurt to have a rushing attack that averages 5.82 yards a carry and 207 yards per game. The running game certainly opens things up for being able to convert third downs.

Key #3: Red Zone Efficiency: One of those stats that you hate to see from an opposing team is a team being top 25 in red zone offense and red zone defense. Lots of times for the offense, the red zone could be lots of field goals, but for Kansas that’s not the case, 15th in the nation in scoring offense, 18 rushing touchdowns in the red zone. Defensively, Kansas is much more susceptible in the red zone through the air, allowing 16 passing touchdowns to just 5 running.

A couple of other scoring items is that Kansas is that they allow 20.4 points at home and 39.8 points on the road, which bodes well for Texas Tech. Offensively, Kansas just puts up points, 34.6 at home and 42.0 on the road, so no matter what, Texas Tech is likely going to have to put up some points.

Can Texas Tech win 2 out of 3? That’s really where we’re at right now, right? With Kansas at home, Iowa State on the road, and Oklahoma at home, Joey McGuire & Co. need to win the next 2 of 3 in order to become bowl eligible. I would tell you that it’s certainly possible and there’s part of me that thinks that Iowa State will be a slight favorite, and I don’t have a clue with Oklahoma. And honestly, this will be as good of a test as there can be, all of these teams are beatable and it’s going to be interesting as hell to see how this plays out.

Dallas Morning News’ Shawn McFarland: Texas Tech signee Drew Steffe wanted to go ‘all the way’ with Frisco. On Wednesday, he did