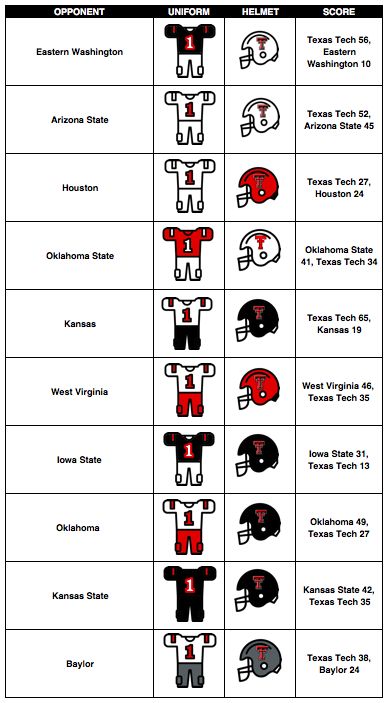 The big news is that Kenny Hill isn’t going to play and that’s pretty significant. However, TCU has probably known about this the entire week and they’ve had time to prepare. In fact, we had someone on the STP staff who had a hint of this early in the week, that it was concussion related and that Hill wouldn’t play. Most likely, the Texas Tech coaching staff also probably knew about this as well. Robinson has appeared in very limited time, completing 7 of 10 for 99 yards and 2 touchdowns. Robinson was a highly rated recruit from DeSoto and led DeSoto to a state championship in 2016 where he ran for 3,400 yards and ran for 1,400 while scoring gobs of touchdowns. Robinson is a big kid, 6-2/225, and physically he’s similar to Hill in stature.

The thing that Robinson didn’t do very well, especially in the spring was connect with his receivers. That was a problem for him and that shouldn’t be a surprise, he’s a true freshman going through spring practices and his head is probably swimming. I think Robinson threw a couple of picks (this is going off of my memory, so bear with me), but Kenny Hill threw some picks as well. It was a rough day for the quarterbacks overall and I think Robinson had the only touchdown for the day.

I certainly think it is significant that Hill is out and if you wanted a foothold into thinking that Texas Tech has a legitimate chance to beat TCU this is it. This, however, is completely predicated on Texas Tech being able to do something to TCU’s defense. Statistically, the TCU defense is one of the better defenses that Texas Tech has played, at least on paper. I know these things aren’t played on paper, but I think Texas Tech will have their hands full with rushing TCU defensive linemen and a back seven that will do their best to confuse and rattle Nic Shimonek.

It’s easy to say that these games rest solely on the quarterback, but in this instance, I think this game will be won or lost on how well Shimonek plays. If Texas Tech gets good play from Shimonek, which would be 350 yards passing and 3 touchdowns, then I think Texas Tech has as good of a chance of winning. If Shimonek plays like he did against Baylor then I think there will be trouble. I’m guessing that TCU will dare Texas Tech to run the ball and take the ball out of Shimonek’s hands and when the Horned Frogs do defend the pass, they’ll most likely try to keep the top on offense and not let anything get deep.

That offensive line moving the OU defensive line is pretty scary, the defensive line for Texas Tech is going to have to move some folks . . . the Andrews touchdown by OU is an example of how TCU had a pass play perfectly defended, but Mayfield made an even more perfect throw, that’s what Shimonek will have to do agains the TCU defense . . . That OU offensive line usually puts teams on skates and you can’t read too much into the OU line moving folks . . . seeing TCU miss some folks in open space should give you some hope about how Texas Tech will play . . .

I would be surprised to see a ton of trickery, but Robinson can pull it off athletically . . . I think TCU is going to just drive and drive and drive you, not a ton of big plays, just grind it out . . . TCU’s offensive line is pretty mobile and agile, they’ll move well . . . again, when you have two defenders on a receiver and the receiver still make the play, you have to trust your wideouts to make that play . . . seeing Buechele bottled up and sacked is going to give me the night sweats . . .

No quoteable quotes from head coach Gary Patterson, only video. I wanted to pull this entire exchange (this is exactly as it happened) from this week’s press conference from Kliff Kingsbury:

Q. I don’t know if I asked you earlier, but what kind of challenges do the front seven pose?
KLIFF KINGSBURY: Yeah, they’re so well-coached and experienced. They’re just always in good position and they tackle great in open space. You don’t see them making mistakes in anything. You don’t trick them in the pass game or the run game. They read their keys really well and they’re always where they should be.

Like I said, it’s a case where you have to make a miss in space or have some great move to get away from them. Because they’re going to be there and they tackle well.

Q. The run game going to be kind of key for you all to set that tone and just kind of see if you can guys can make those one-on-one plays?
KLIFF KINGSBURY: Yeah, we need to be effective. They’re hard to move inside there. Those guys are well-coached and really buckle down inside. Not many teams have gotten much movement inside. So we’ll have to work at that. Got to establish a run game of some sort to keep us in the game.

Q. Big win, but another fourth quarter where the offense struggled again. It seems to be happening every other week. Have you been able to step in and identify what’s going on where you can possibly change it these last two weeks?
KLIFF KINGSBURY: I’ve got to call better plays is what it comes down to. Just looking at it, I felt like after that fumble, as an offense, staff included, we didn’t respond well. I think it was nine plays for 29 yards. After that, everybody got down and didn’t respond the right way.

That’s all me. I’m the one that calls the plays, and I’ve got to get us some better plays and plays that Nic is comfortable with and our offense is comfortable with. Find a way to be better at calling plays in the fourth quarter.

Q. (Indiscernible)?
KLIFF KINGSBURY: Yeah, yeah. Tried to push some stuff down the field and we should have just kept taking what they’re giving them. That’s on me as a coach. I have to do a better job.

Q. Is that one of those things where play calling changing in the fourth quarter or execution changing? Was it just not — was it more than just last week?
KLIFF KINGSBURY: Yeah. I mean, obviously, it hadn’t been very good closing out games the entire year outside, I think, Arizona State and I guess Houston. So when you’re calling the plays, that’s on you. I’ve got to find a way that our quarterback is comfortable, our team is comfortable, and executing the right plays late, and I haven’t done that. So that’s on me.

Q. (Indiscernible)?
KLIFF KINGSBURY: Yes, yes, I think I’ve got to have a better plan late that we’re doing stuff that everybody’s comfortable with and can execute under pressure.

I think there are a couple of takeaways here, namely that Kingsbury takes responsibility for the offense, which he should. Kingsbury also talks about just taking the small stuff, which is what I think Shimonek will need to do this week and rather than trying to push too much down the field and knowing how tough it can be for this team to convert on third and longs, I think Kingsbury can/should push the ball if he’s got a convertable third and short. Pick and chose those situations or maybe the better idea is to just try to grind it out against the TCU defense. I think that’s a tough task.

To clarify, the staff gave their predictions BEFORE the Kenny Hill news. Not sure if they would change their minds. For me, I think the Hill news does change some things, but I still worry about the offense being able to put points on the board. I think it is also significant that their kicker, Jonathan Song is 8-8 on field goals this year, while Hatfield may actually be healthy. I think this is a 24-21 sort of game and I think TCU and their defense steps up, but I also think it could flip Texas Tech’s way with a field goal miss.