A statistical preview of TCU vs. Texas Tech. 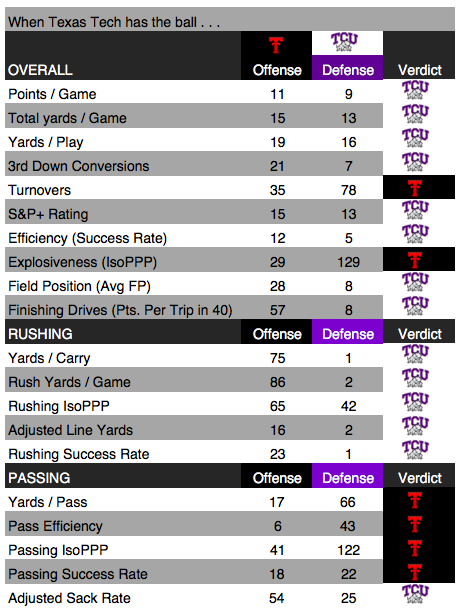 As always, credit goes to Football Study Hall and CFB Stats for all of your college football stats. All of them.

Quite simply, this is not going to be pretty from a statistical standpoint. TCU has the more statistically dominating team and it’s really not all of that close. In fact, I think TCU is statistically more dominating than any team Texas Tech has played this year. This is why the game last week between TCU and Oklahoma was such a shock.

The TCU defense is really the best defense Texas Tech has faced all year. Obviously, TCU’s run defense is absolutely the best that Texas Tech will face this year. To be 1 or 2 in four of the five categories is something we certainly won’t see again this year.

I think going into this game, this game is going to wholly be on Nic Shimonek to perform and take advantage of whatever they have going on. Last year, TCU dropped 7 or 8 and I’ll be interested to see how they play Texas Tech this year. My guess is that they play the Red Raiders the same way and dare Texas Tech to run the ball.

When TCU Has The Ball 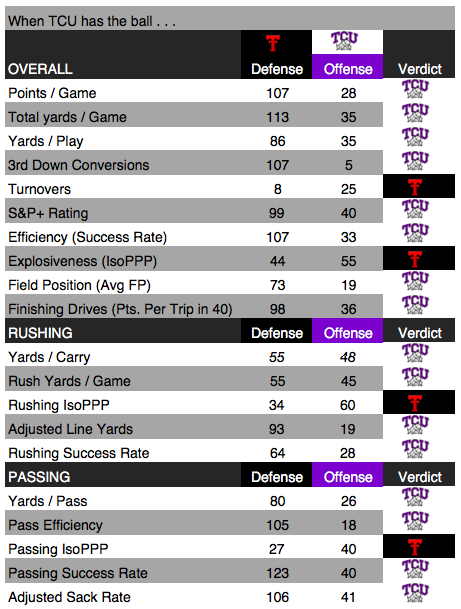 Again, there are not a lot of positives to take from this. Typically, Texas Tech has a decent number of categories that they’ve won and you feel relatively good about the defense going into the game. And TCU is in the top third of just about every offensive category, so they are very good, but maybe note elite.

The rushing defense isn’t so far off what TCU does, I think this is a pretty even match, especially now that TCU’s leading rusher is out for the game (he apparently is). Again, the rushing defense has withstood the test of the Big 12 season and that’s the one area I have the most confidence.

TCU doesn’t exactly turn the ball over a ton, but if Hill doesn’t play, then maybe there is an open opportunity to grab a few more turnovers. Texas Tech has absolutely been opportunistic there.