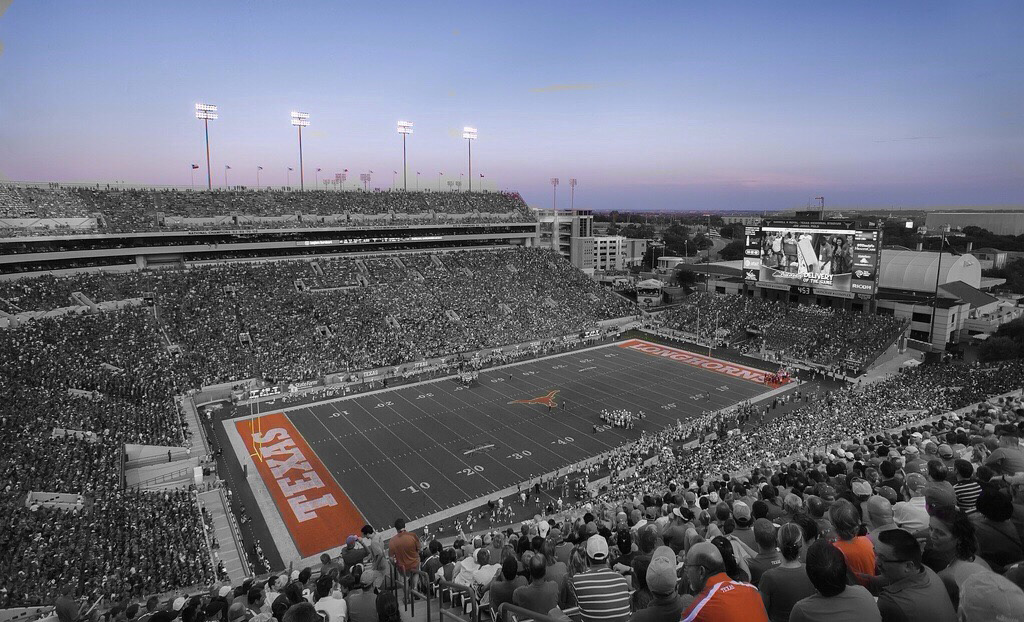 An independent UT could be beneficial for all.

“Four hours of cocktailing I never got a chance to crack one binder,” TCU Athletic Director Chris Del Conte said to the crowded room of Big XII bluebloods. The dinner, in 2014, was held to honor outgoing University of Texas Athletic Director DeLoss Dodds, and the highly regarded AD yielded the floor to Del Conte upon his arrival. “All right Del,” Dodds said. “Let them have the story, my man.”

Del Conte admitted, “the pressure of the entire institution was on my shoulders” to join the Big 12. He worked the phones, calling every Big 12 contact he knew. Support within the Big 12 was growing, including at Oklahoma where good friend Joe Castiglione had been encouraging. But Del Conte knew if he didn’t have Texas, he didn’t have a chance.

It was a quite a visit. Del Conte grabbed a car, a driver and a bunch of reference material, binders, extolling the advantages of TCU and Fort Worth.

“I get up at 8 o’clock in the morning and drive to Darrell K. Royal Stadium. I get to [Dodds’] office. Nine comes around, 10 comes around. I’ve got a GA [graduate assistant] outside waiting for me, by the way. I tell him, ‘Just wait 10 minutes I’ll be back.’ Pretty soon it’s 3:30.

“[DeLoss] comes out and says, ‘Who are you?’ Chris Del Conte, Texas Christian U. He doesn’t hear ‘Chris.’ he hears ‘Del’. ‘Del, let’s go get ourselves a drink and discuss it.’

“We went to a restaurant and had a little libation at 3:30. By the time 8:30 rolls around, we were [into it] pretty good but we got ourselves in a situation. I kept trying to give him my [binders]. He said, ‘I’ve heard enough, Del’ and just walked away.”

The next morning, Oklahoma AD Joe Castiglione shared the good news with Del Conte: The Frogs were in.

It is a quintessentially Texas story, covering both the hubris of the university and the romanticized swagger of the state. And it is also proof of a mindset, an imbued vanity that makes UT one of few, if not the only, program that can successfully leave the comfort and self contained structure of a conference and succeed as an independent in football.

At first blush the idea of such a departure seems ludicrous, particularly considering the recent ripples in some coaching circles about the perceived unfair advantage that current independent programs BYU, Army and especially Notre Dame have in navigating their way toward a berth in the College Football Playoff.  Those concerns were addressed last Thursday. “The three independents are perfectly happy being independent,” Bill Hancock, executive director of the CFP said of the Irish, BYU and Army. “They have the ability to craft their schedules to fit their needs,” Hancock told ESPN. If their need and goal is to be in the playoff, then they’re in the same boat as everybody else. You better play a good schedule if you want to be in the playoff.”

And it’s that ability to craft their on schedules that should intrigue UT and its fan base–and potentially assuage member schools that the Longhorns would leave behind. An independent UT could maintain its annual matchups with Baylor, TCU and Texas Tech. The Red River Rivalry could remain a staple of the Texas State Fair, and perhaps, most importantly, the Thanksgiving game with Texas A&M could–and should–resume. Throw in Arkansas, a service academy or two and an annual trip out west and the Longhorns’ schedule would be worthy of its own ESPN affiliated network.

Said network, of course already exists, and makes the case for UT’s independence stronger still; the case for UT to survive on its own and for the surviving schools of what remains of the Big XII after the program on the 40 acres is gone.

The LHN, or “the elephant in the room,” according to Oklahoma chancellor David Boren, will earn UT $300 million over 20 years from ESPN. $15 million a year into the school’s coffers to air, among other things, fashion shows. From C. Austin Cox at the Best College Sports News Network:

The only ones really doing well at the moment are the Texas Longhorns themselves. UT gets paid approximately $15 million a year from the network that is co-owned by ESPN and by all estimates, Texas’ partner has already lost tens of millions of dollars on the failed network that shows college fashion shows. It doesn’t help that the Big 12 is partnered with FOX while Texas is partnered with ESPN. These kinds of conflicting choices and business decisions led to the demise of a power conference less than two years ago. Will LHN lead to the demise of another.

An independent UT would help to slay Boren’s elephant. Texas could continue to cash ESPN’s checks and the new Big XII could finally launch a network of its own, earning the remaining member schools millions of dollars annually in the process. Sure, the argument could be made that a conference sans Texas would be less appealing. But if given the choice between a conference without Texas and potentially no conference at all, the former appears at least more palatable. And enticing three new universities to join would perhaps prove easier if Boren’s elephant was gone and a new conference network emerged based on the novel premise that all schools would be a party to its success.

I’ll leave the particulars to those smarter than me, but it should be safe to assume that there are more than a handful of universities whose entrance would make the Big XII intriguing, national, and most importantly, viable.

Some will argue that the Longhorn football program is currently in no position to make such a bold move, given their on the field performance of late. But programs are cyclical, and while it might be a delicious plate of schadenfreude, or even at times borderline erotic, to watch Texas’ struggles, it would be foolish to assume they will last. No one has more resources, name recognition and most importantly higher expectations from a mammoth fanbase than Texas. The school that was willing to pay Nick Saban $100 million to prowl the sidelines in Austin will stop at nothing to be considered again amongst college football’s elite.

More still will argue that new Texas AD, Steve Patterson, is no DeLoss Dodds, whose boldness allowed for inviting a small school in Fort Worth to join his conference after an impromptu day-drinking session; whose Texas sized ego would’ve been more prone to entertain the dangerous thrill borne from a conference break. In many ways those making that argument are exactly right. While Patterson may be irking some of those inside the program, he will undoubtedly leave Texas in better shape financially than he found it in. Bits of the troubling changes instituted by Patterson were chronicled recently at Burnt Orange Nation by Wescott Eberts:

Many of the complaints center around Patterson’s perceived lack of interpersonal communication skills and penchant for commoditizing the Texas brand through attempts to increase profits and cut costs instead of actually supporting athletics programs.

Notable incidents include the resignation of the women’s tennis coach after Patterson restricted coaches to 30 visits per year to Texas dining halls before incurring a cost of $10 per visit thereafter and the 10,000 Texas fans deciding not to renew their season tickets due to price increases. In fact, an open records request found that almost 60 percent of season-ticket holders experienced a price increase between 25 and 50 percent. All this after years of declining season-ticket sales.

While several of the complaints against Patterson appear to have merit, the mess that he inherited is often overlooked. According to an acquaintance with significant ties to the university and inside knowledge of fundraising activities, the athletic department was run like a rural bank in the Wild West. Donors, whether they be million dollar whales or of the occasional $25 sort, all received the same form letter of thanks. There was no real system to track where the money was coming from and how best to maximize requests for giving. There was a river of money flowing in, so the status quo was accepted. But the changes Patterson is making will make that river much larger, and the current much stronger. Patterson may not survive based on his interpersonal deficiencies, after all he’s no DeLoss Dodds, but Texas will be even richer because of his cleanup efforts; even more viable in their ability to stand alone.

In the end it will be up to the powers that be in Austin to decide what to do about the most recent round of conference shuffling. Here’s to hoping the university’s arrogance–in part earned, in part inherited–leads the football program to a path of independence. In so many ways a move that on the surface appears narcissistic could actually benefit all involved. The same school that decided upon the Big XII’s newest member based on the AD’s ability to hold his liquor, the same school that decided to launch the LHN with Matthew McConaughey’s slow burning “ours is the color of sunset and leather,” could in fact do something they are unaccustomed to–help other schools while helping themselves.