We truly are watching one of the best running backs in Texas Tech history.

Seth may have said it best yesterday in the Ten Things post in that DeAndre Washington very well may be one of the best running backs to have ever played for Texas Tech. And we get to watch him. Every weekend. Soak it in these last 9 (yeah, I went there) games.

This week, we’re looking at one of Washington’s touchdown runs. And it’s nice to have that option, because he had four of them on the day (dude scored me 49 points for me in my fantasy league!). If you were paying close attention, you may have noticed that two of Washington’s touchdowns came on the same play, but we’re not looking at those. We’re looking at the one he broke for 26 yards and Houdini’ed himself out of a tackle near the line of scrimmage, like he always seems to do.

I thought we’d start with the gif of the play. And I’m sorry to rob you all of the satisfaction of watching him actually crossing the goalline – I don’t have a premium account with this gif creater. Trust me, he goes those last 15 yards untouched.

Kingsbury and Eric Morris seem to have picked up on the success Baylor has been having in both their run and pass play designs by spreading the wide receivers out as far as they do. Like I did previously, I will direct you to another Grantland article written by Chris B. Brown, this time on Art Briles and how he’s found success.

Ask any offensive-minded football coach how he plans to attack a defense and at some point — maybe after talking about establishing the run, or about getting the ball to his best players — he’ll say that his offense is designed to stretch the defense horizontally and vertically. The idea of using the entire field has long been part of basic football theory, but most offenses don’t follow through on that promise.

The first thing to notice when watching Baylor is the splits of the wide receivers. While most teams put their wide receivers on the numbers, the Bears line theirs up well outside, sometimes directly on the sideline. By doing this, they force defenses to account for the entire width of the field.

The fascinating advantage of Baylor’s splits is the effect they have on pass coverage. Defenses now use lots of complex, hybrid pass coverages, but most still reduce to a basic distinction: Is it man-to-man or zone? By taking such wide splits, Baylor puts every pass defender on an island, transforming most zone defenses into a type of de facto one-on-one man coverage.

TL;DR the wide receivers split out sideline to sideline forces the defense to play man to man, even if their in zone; too much space to cover NOT to play one on one.

Look at the formation here by Tech. 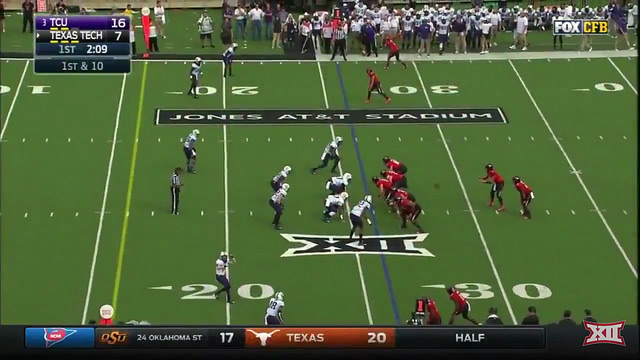 TCU didn’t line up how a typical defense plays the receivers, by putting one more defender to cover the receivers on that side of the field. Normally, in a formation like this, you would see three TCU defensive backs to each side of the field to cover the two receivers to each side. But, you still see the concept illustrated in the Grandland article and the quoted material above; you’ve got man coverage on the outside even if the call was for zone. Also worth noting is that with a heavy box from TCU, you would not expect a run call here. TCU has six defenders in the box with a safety seven yards off the ball. This is a pass box all the way. Unless you have a DeAndre Washington on your team. 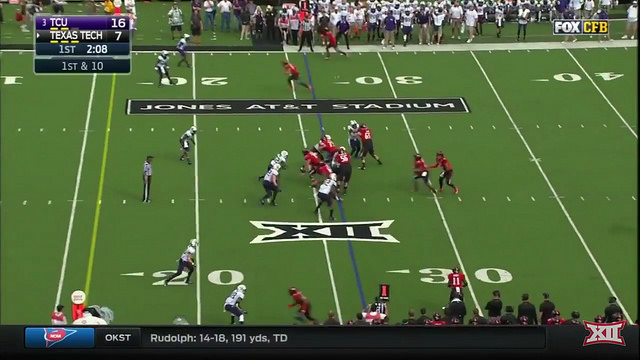 Right after the snap, you see that LeRaven Clark has let the defensive end go unblocked and is working up to the linebackers. This is a zone read play, where Mahomes is reading the unblocked player to decide where the ball goes. The defensive end stays, thus the ball is handed off to Washington. Also notice Jakeen Grant at the bottom of the screen. I believe he’s not just faking the screen, but that it’s an actual option built into the play, giving Mahomes a third option.

Clark and Jared Kaster are working up to the two linebackers, evening out the advantage TCU had in the box. The key to the read option play is that if the QB makes the correct read, the defender that is being read is ALWAYS WRONG. 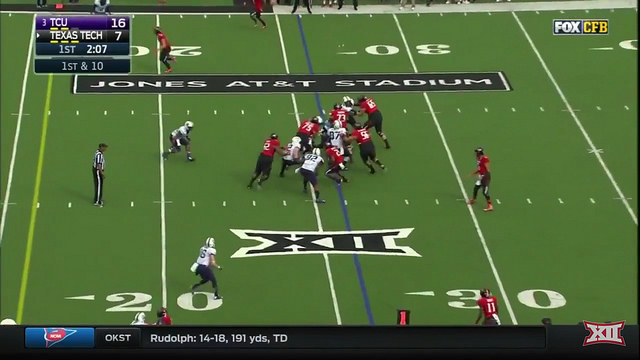 In the above shot, you see the end that was read closing down to tackle Washington and would appear to be in good position to do so at the line of scrimmage. The rest of the defensive line and linebackers are blocked. TCU has two free safeties here, one that was covering Grant (#16) and the other that was in the box originally. 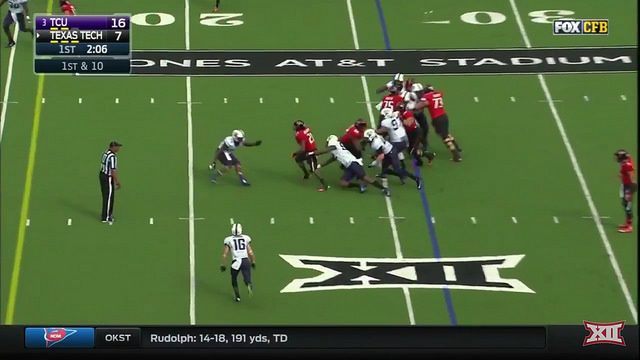 Here is where the individual skill of Washington completes the play. He’s beaten the defensive end and makes a quick move to get the last safety to move the wrong direction, taking him out of the play. 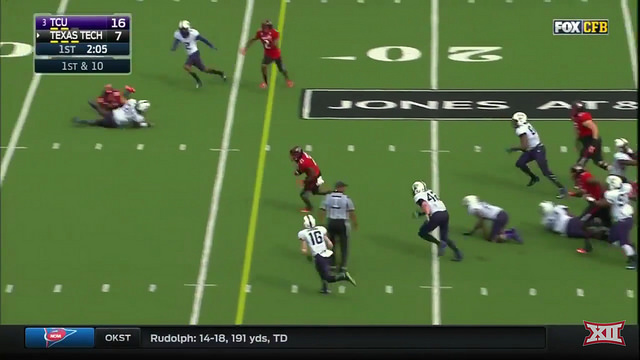 One last thing here that seals the touchdown.Look at the top of the screen, right under the score box. Sadler has taken his defender to the ground. No one else is left to make the play.

This play was set up with the formation, taking the defensive backs way outside of the offensive formation, the offensive line beating every single one of their men, Washington making a ridiculous play to make two TCU defenders look silly and Sadler taking out the only player remaining that maybe could have made the tackle. This play was successful in every aspect, play call/design, execution and individual player skill.