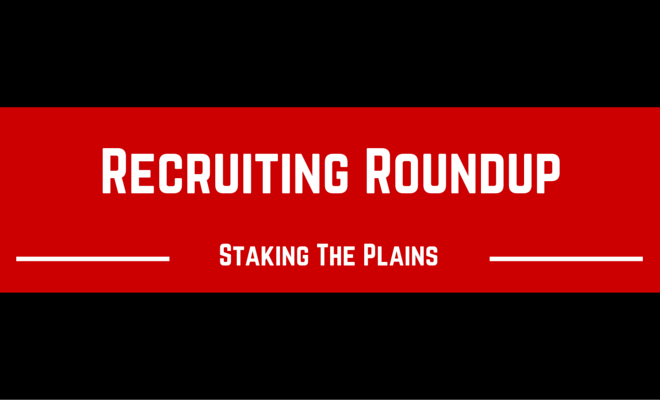 We round up the recruiting stories from the week, including Jack Anderson talking Texas Tech and Johnathan Picone is recruiting for the Red Raiders.

*Ed. Note: I’m going to try to round up all of the recruiting stories in one post late in the week. I can’t promise this will be an every-week post, as it depends on how busy things are. We’ll see how this works out, but I felt like theses links needed their own spot. Also, the name of this post may change, but the content will remain the same.

Anderson on Texas Tech. We’ve got two links on Texas Tech’s newest commit, 2017 center Jack Anderson, the first from RaiderPower’s Dan Meyer, who talked with Anderson about who he is recruiting (would love 2017 RB Eno Benjamin) and what he thinks about Texas Tech:

“I think people and recruit’s eyes are raised a little bit by my decision, but the future is bright,” Anderson stated. “The record isn’t too bad right now, but I don’t think wins and losses are huge right now and that in the grand scheme of things, Texas Tech has a long-term plan and by the time I get there, there will be a Big 12 championship and we will do special things.”

The second link is from Bleacher Report’s Tyler Donohue who writes that Anderson was never blown away by any other program and he felt that he was ready. Donahue notes that Anderson’s father went to Texas Tech and his sister is currently at Texas Tech:

“There was a time when Texas Tech used to beat Baylor and TCU by a bunch of points. My dad told me about watching some of those games,” Anderson said. “My goal is to help bring back that prior glory. I think history will repeat itself, Tech will be back on top and I can’t wait to be a part of it.”

As an aside, Cibolo may have the best team in the state and Martin is a first year quarterbak leading the way. It’s awesome and fun to have coaches out in front of the recruiting game.

Speaking of Nelson. Speaking of athlete Jaylin Nelson, RaiderPower’s Zach Tanner writes about Nelson, who is sitting out this year as a junior because his transfer to Duncanville because it was ruled as being done for athletic purposes (I think), so he is an unranked player without any stats this year and his only offer is Texas Tech:

“You’ve got the streets crowded, you’ve got the fans everywhere, tailgating, everything shut down for the game. It was a really good boost. You can tell it was a college football town, and everybody came just for that game. I liked it. It was a packed crowd, you could tell everybody loves football in Lubbock. Everybody came out to support them.”

Notebook: Smith and Brown Receive Offer. Red Raider Sports’ Drew Kohnle has a recruiting notebook and one of the bigger recruiting notes of the week was that Texas Tech offered Desmon Smith, a defensive back from Odessa Permian:

“It was crazy. I’m really excited about it. I’ve been waiting on it for a while, so I’m really glad the offer came my way,” he said. “I’ve been hearing from Coach Curtis. He’s been talking to me a whole lot, and we really talked about what they can do with my size and my speed. He called and told me what he has in mind for me, what he likes about me, and what they want to do with me.”

Also offered is 2019 offensive lineman Brannon Brown, who is the much younger brother of current Red Raider Baylen Brown.