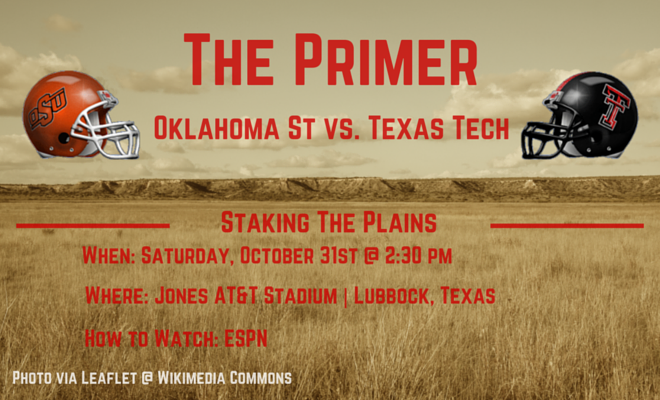 When, where, and how to watch the game, plus the early Vegas odds for the game, key players to watch and more.

Last Week: Oklahoma State throttled Kansas (ESPN box score) at home for their homecoming. And good thoughts to the families that were affected by that horrific crash during the homecoming parade. I just can’t even imagine. Back to the game, the Cowboys only allowed 30 rushing yards on the day and 191 through the air. Mason Rudolph threw for 305 yards and a touchdown, while J.W. Walsh threw for 68 more yards and 2 touchdowns. The OSU running attack was pretty good overall, although they ran 47 times for 202 yards, no player had more than 51 yards on the day.

What’s at Stake: Oklahoma State is undefeated and it seems like it’s been years since Texas Tech has been able to get a win, either in Stillwater or in Lubbock. Texas Tech is coming off of a pretty lousy game against Oklahoma. It’s also going to be interesting as the top four teams all play each other the last four weeks of the season

Miscellaneous: Maybe the most troubling stat for Texas Tech fans is that OSU is converting 95% of their redzone opportunities. I haven’t looked to see what it is as far as touchdowns, but I’d guess that it’s pretty high and that’s a problem for Texas Tech . . . Oklahoma State hasn’t been as explosive on offense this year, only going for about 150 yards a game and that’s 96th in the nation . . . the defense though has been fantastic, ranking 21st overall, but against the lone offensive minded team, West Virginia, they allowed 443 yards . . .