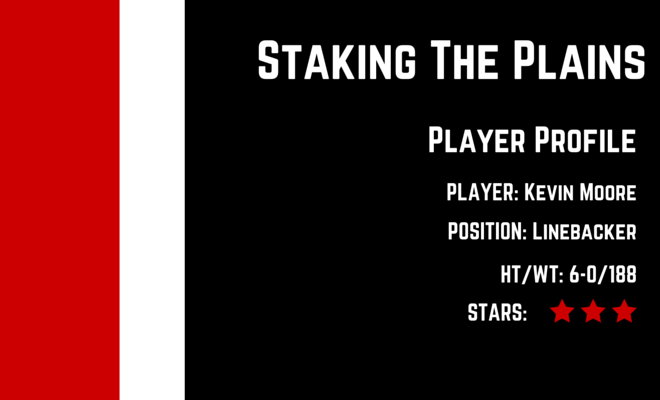 Texas Tech received a big commitment from Louisiana linebacker Kevin Moore and we’ve got links to the recruiting services, video and analysis.

The Player Speaks: Red Raider Sports’ Josh Koch talked to Moore, who said it was a number of things that factored into his decision to commit to Texas Tech:

“I feel like it’s a perfect place for me,” Moore said. “They showed how I can use my skills and they explained how they would use me.”

The three-star recruit, which held 15 offers, just liked Texas Tech and the whole atmosphere around Lubbock. That, and his relationship with cornerbacks coach Kevin Curtis.

Scouting Report: It appears that Moore is going to be one of those guys who could work into that safety / linebacker combination. Not a traditional outside linebacker like Pete Robertson, coming off the edge, but a guy that can play the run and float out and play the pass and a guy that you don’t have to take off the field because of the spread offense. As a safety, Moore does have excellent range and is able to make a play on the ball and he has excellent range out in space. I think that’s the key here is how good Moore seems to be out in space, being able to make an open field tackle, but he also doesn’t seem to let the offensive player get ahead of him to the point where he can’t make the play. Of course, it’s a highlight video, so you probably wouldn’t see that, but it seems like he’s taking in the play.

As a linebacker, he does a nice job of scraping off of the line pretty quickly and filling the gaps. When he does rush the quarterback up the middle, he has no other responsibility other than to just cause havoc, which he does well. Also, he seems to make a lot of tackles around the hips of the opponent, which is probably a lot easier for him to do when going up against a bigger player and Moore only weighing 190 or so.

Kevin, welcome to Texas Tech and Git Your Guns Up!