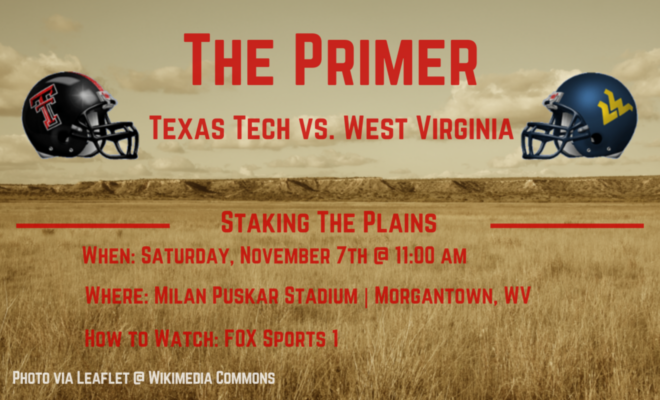 We set the table as the Red Raiders travel to Morgantown to take on West Virginia. We’ve got details on when, where and how to watch along with key players for WVU.

Last Week: TCU just ran all over West Virginia, as the Mountaineers allowed 228 yards on the ground and 338 yards passing (ESPN box score) Skyler Howard was more than mortal, going only 16 of 39 for 160 yards with a touchdown and an interception, while Smallwood did get his 113 yards rushing on 20 carries. This wasn’t a pretty game for West Virginia, mainly because they just couldn’t do anything against TCU’s defense and Howard was pretty well off for the game.

Get caught up on all of the Big 12 action at LandGrant Gauntlet!

What’s at Stake: West Virginia is 3-4 on the year and 0-4 on the year in the Big 12, having played Oklahoma, Oklahoma State, Baylor and TCU, which is all of the ranked teams. It’s funny how the schedule is so back loaded with the teams that were expected to be good are playing each other in the last 3 or 4 weeks of the year. I would guess that this is not a coincidence. Texas Tech is now on a 2-game losing streak and looking to win one of the next 3 in order to qualify for a bowl and hopefully more. West Virginia has their easy part of the schedule coming up with Texas Tech and Texas both at home, on the road for both Kansas schools and then at home for Iowa State. I’d guess that Dana Holgorsen might be coaching for his job very soon.

Miscellaneous: West Virginia is still a top 30 team in total offense, which isn’t a surprise, with the 27th best rushing offense and the 43rd best passing offense . . . the defense is maybe the surprise as the Mountaineers have the 97th best defense overall, allowing 176 yards a game rushing and 255 passing . . . part of WVU’s problems have been on 3rd down conversion, where they are only 84th in the nation in 3rd down conversions with 38%, but on defense, they are holding opponents to a conversion rate of only 29%, which is 9th in the nation . . . WVU has also struggled with redzone offense, 105th overall and redzone defense has been a problem, only 78th in the nation . . .