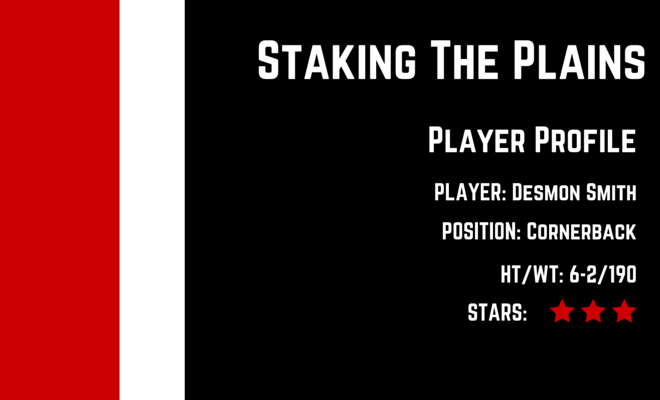 The Player Speaks: Red Raider Sports’ Landon Wright talked with Smith, who said that he it is his versatility that Kevin Curtis like as a future defensive back for Texas Tech:

“I’ve built a good relationship with them,” Smith said. “They’ve got big things planned for the program as a defense. They plan to use me as a safety or corner, whatever fits the scheme the best that week.”

“That’s going to be at any college. If I go in, it’s not going to be handed to me. They all say you can get playing time early, if I come in and work and show I know what I’m doing, I’m going to play, there’s no doubt about it.”

Scouting Report: I can’t figure out where Smith will play, but I’d guess that he might play a bit of both spots at Texas Tech by the time it’s all said and done. Smith already has excellent size for his age I really see him transitioning to a safety position by the time it’s all said and done. I think he has decent speed, but it’s not elite, although that’s where the additional height comes into play. He makes some plays as a result his size, but son of a gun, it seems like the receivers he is playing are not really elite. Either way he’s making plays rather than not making plays and that’s a good thing. Given his size, he does a terrific job of supporting the run. There is a second video of Smith that I think exhibits some of those traits that you want in a cornerback, i.e., supporting the run, some real quickness in jumping on the receiver, tackling in open space and not allowing the receiver to go much further.

Desmon, welcome to Texas Tech and Git Your Guns Up!