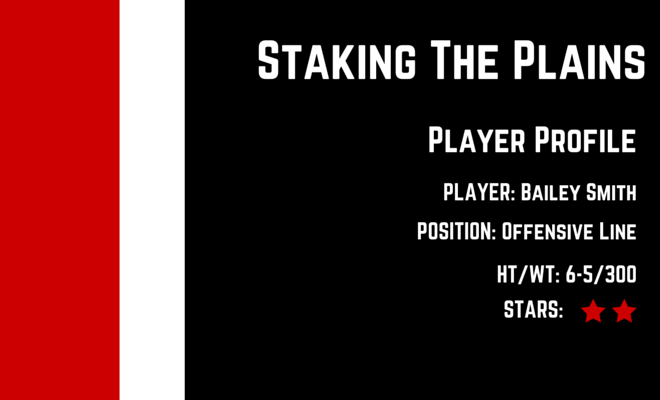 The Player Speaks: Red Raider Sports’ Will McKay writes that the entire situation for Smith was a bit surreal, noting that Smith has been talking with offensive line coach Lee Hays since camping over the summer:

“I mean, it was pretty surreal. It was pretty exciting for me. Whenever I got off the phone with him, I was as happy as I could be. I called my parents, told them about it,” he said. “Me and Coach Hays have been talking since May. I really like him. He’s been nothing but nice to me. He’s been very honest with how things are, and that’s what I like about him.”

Scouting Report: So, I’m a bit surprised as to how all of this played out, particularly how Smith didn’t have a single offer up until he received one on Tuesday, then commits on Wednesday. I would say that my assessment of Smith is that he is very raw, at least according to his junior film. He’s a big body and has a big frame, but I think he’s got some footwork issues and things he needs to work on there. Not the smoothest athlete, and he needs to do a better job using his hands on the defender, but that comes with better overall strength. I think what Hays sees is a guard, which is fine, especially after we learn that hays thinks that Terence Steele and Madison Akamnonu are projected to be tackles. This reminds me a bit of the commitment of Cody Wheeler (from Allen)last year, not a whole lot of action until the end of the year. And I don’t mean to be too critical about Smith, but I do think he is raw and I would guess that the coaches certainly see a guy who is a project, but is projectable in terms of what they think he can be. I would also guess that Smith probably has a good head on his shoulders and is going to work. I should also mention that I do trust Lee Hays and his evaluation. He’s been solid in terms of evaluation thus far, and we’re about to see how good he is at development, based off of last year’s class and this year’s class.

Bailey, welcome to Texas Tech and Git Your Guns Up!