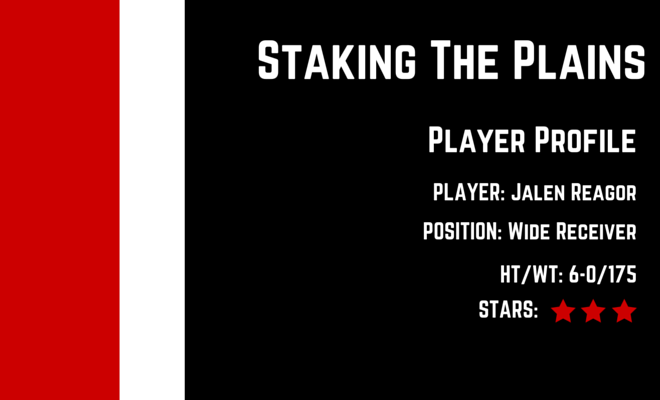 We take a closer look at Jalen Reagor, Texas Tech’s newest commitment for the 2017 class.

The Player Speaks: Nothing yet, but Reagor did catch 64 passes for 1,108 yards and 13 touchdowns as a junior. One other notable note, is that Jordan Kitna was the primary quarterback, that’s right, son of John Kitna, long-time NFL quarterback. I’d also send you to Double-T 104.3 where Level and Hanni interviewed Montae Reagor, Jalen’s father, who didn’t just play for Texas Tech, but was exceptional for Texas Tech and played in the pros. Montae is coaching in Ennis and his dream is to come back to Lubbock and coach alongside his son. Montae will get you fired up and he really wants to be in Lubbock.

Scouting Report: Reagor has a ton of catches where he’s having to go up and beat a defender and go get the ball. I love seeing those types of plays from a receiver. That shows a few things, namely that he’s got terrific agility and body control for a guy his size. Of course, we don’t get to see all of the battles, but you would presume that he’s winning most of these battles and as a result, he’s simply over-powering opposing defensive backs. Reagor also does a nice job of really looking the pass into his hands, on everything. Also loved the tunnel screens and Reagor weaving through traffic. If anything, that’s an indication of his quickness and burst to accelerate quickly through traffic.

Jalen, welcome home and to Texas Tech and Git Your Guns Up!