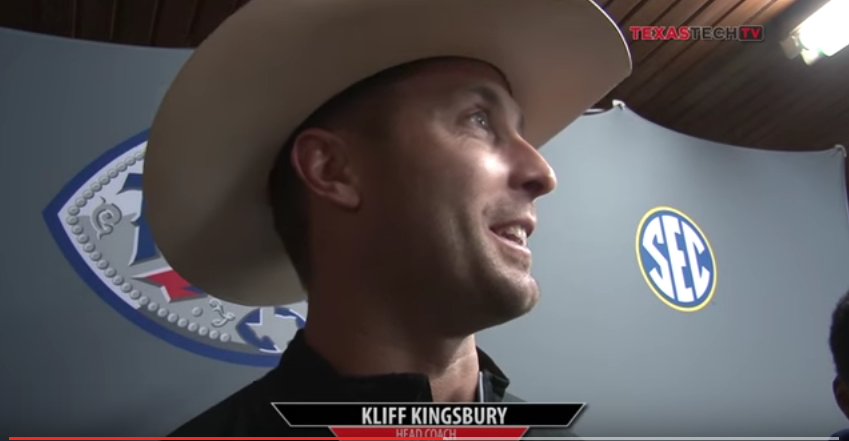 Texas Tech and LSU participated in the rodeo bowl and the first practice report from Texas Tech.

Everybody Gets a Cowboy Hat; Texas Tech Participates in Rodeo Bowl with LSU. Last night, Texas Tech took part in a rodeo bowl, one they lost to LSU, and involved roping and chasing cows and throwing bales of hay and playing washers.

The official site has a quote from Kingsbury about the event.

“Our guys did a great job of being aggressive,” Texas Tech head coach Kliff Kingsbury said. “It’s good to see that aggression. It was fun to see our players in a different environment with cowboy hats and a different theme. It was a fun event for all of us.”

This is Gary Moore getting the ribbon off the calf:

Get the ribbon off the calf? No problem! Winners again. #WreckEm pic.twitter.com/S7X5bUYE3D

This is Kliff Kingsbury, Tommy McVay and some person I don’t know.

Kingsbury mingling about and posing for pics at the rodeo at George Ranch historical center pic.twitter.com/9klV6s4IKl

LAJ’s Don Williams recaps the rodeo bowl with lots of quotes from the cowboy MVP, Gary Moore, who also roped his calf (not a real one, but the one that’s on a sawhorse). I also love hearing John White complaining about twine bales versus wire bales. Couldn’t agree more.

If youd like to see a photo gallery of last night’s rodeo bowl, the official site has you covered.

Practice. You can check out a photo gallery from today’s practice from the great Michael Strong.

“The reason I think we came out and won both of those games is we just wanted it more,” senior left tackle Le’Raven Clark said Saturday. “Everyone expected the other team to win. We kind of took it personally. It was kind of hurtful at the moment, so you just go out and compete.”

And head coach Kliff Kingsbury says that the team has been practicing pretty much non-stop:

“Just practice a lot,” Kingsbury said. “We didn’t give them many days off. We gave them Christmas Eve off and that was really it as far as a full day off.

“We practiced straight through to keep them sharp. They’ve been locked in. They’ve practiced this script a ton. They’re going to know it inside and out. Now it’s just about executing.”

Washington Feels Right. Chron’s Adam Coleman writes about RB DeAndre Washington and what it means to play in Houston:

“It’s special,” Washington said. “To be able to close out my college career in my hometown, the city that raised me. To do it in front of your family, your friends, some of your closest people. It’s a good way to go out.”