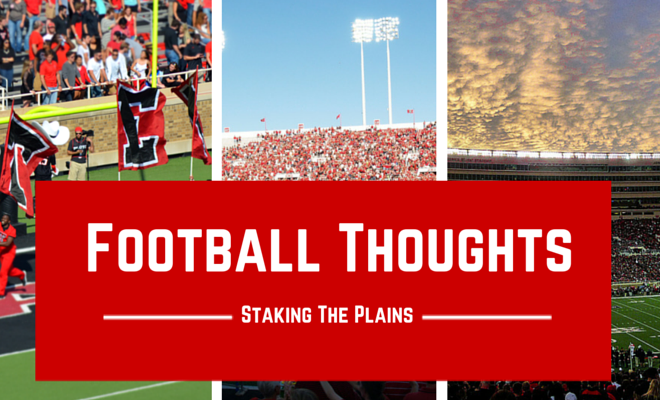 Before the Texas Bowl had even expired, there were rumblings and grumblings on Twitter about how this is just more mediocrity from Texas Tech, a 7-6 finish to a season that some felt wasn’t up to par. For the record, Texas Tech finished 4-5 on the year, finishing 6th overall in the Big 12. The SEC managed the bowl pairings so that Texas Tech played a much better LSU team than a TAMU team that I think Texas Tech would have handled. If’s and but’s.

Most of the angst appears to be a result of projecting into the 2016 season, the fact that the defense is still terrible, that the offensive line is going to have to be rebuilt to an extent.

The big question is if the program is progressing forward or if this is more mediocrity?

Much of this stems from the idea that you have to have your own definition of what is progress is and maybe more importantly or philosophically, are you always hopeful that the next year is going to be just a bit better, or do you consider yourself more grounded and reasoned and can’t be convinced of any such thing.

Let’s tackle the philosophical aspect of this first. There are certain people who are just wired to be more hopeful than others and there are other folks who are wired to be more pessimistic by nature. Oh, sure, there are plenty of spots available in between, but there are extremes, most certainly there are these types of extremes, especially online, where giving hot sports opinions is typically met with a lot of discussion and hot takes. You all have known me long enough to know that I’m very much on the patient side of things. Aside from just being wired that way, I think it is admittedly much more beneficial from a blogging standpoint. Selling hope is a lot more enticing than selling pessimism. Maybe my general philosophy in life gets in the way of being realistic, but I don’t know any other way to live my life. Further, it’s clear that those that are more pessimistic obviously feel the same way. It’s just who they are.

Here’s the key though. You’re not wrong. None of you are wrong about anything.

Digression: I haven’t updated you all as to adoption #2 in a long time. The name reason is because there hasn’t been a lot to update you all. We have a little boy, he’s four years old and he’s waiting for the government to allow us to come get him. The problem is that the president in the Democratic Republic of Congo can flip the switch as to when he will permit these children to go home. As of right now, he has not flipped that switch. We’re going on two years since we started that process. If you ever wanted to know why I’m patient and hopeful, this is a pretty good place to start. You can’t be pessimistic when adopting internationally because more likely than not, you’ll have to wait and be patient.

Aside from your point of view, part two of the equation deals with whether or not you think that the 2015 campaign was a success. Did this team exceed, fall or meet expectations?

This is another question that’s very much particular to the person who is considering the question and it should also be noted how that person perceives life will probably has an effect on whether or not this team met expectations.

The offense was improved, certainly more efficient, and the defense, somehow, was worse . . . at least in certain areas. The one thing that David Gibbs needed to do was to turn the ball over a few more times or be more stingy with the yards. For whatever reason, the defense was even worse from a yardage standpoint. However, the defense was significantly better in turning the ball over. In 2014, yeah, the defense gave up 512 yards, but they also only turned the ball over 1.25 times per game. In 2015, Texas Tech gave up nearly 550 yards, but averaged 1.9 turnovers a game. From just 13 turnovers in 2014 to 25 in 2015. That’s two additional opportunities for the offense to do something with the ball and outscore your opponent.

If nothing, David Gibbs strikes me as a realist and he knew that he had to do one of two things. Either get more turnovers or hold the opponent. I’ll take the kick in the pants for the additional 40 yards given up to get the additional turnover a game every day of the week.

But this brings up to 2016 where we have to figure out those expectations.

By the end of the 2015 season, I usually sleep a little bit more than I normally do during the football season and give myself a week or so of extra rest in order to gear up for the 2016 season. Recruiting is right around the corner.

As close as I follow this team I honestly cannot give a true assessment of the 2016 team until I get a better handle of everything that will happen with this team as well as taking a closer look at the conference. It’s incredibly tough to give a proper assessment without really knowing what each team in the Big 12 is losing or gaining in terms of talent. It’s not recruiting as much, but which player was young and received a lot of playing time and might be able to improve? What about JUCO transfers?

Generally speaking, the offense should be good and the defense might struggle again. It really all depends on whether or not some of the freshmen that played will play better as sophomores and whether or not some of the redshirts that the coaching staff held so tightly to this year will make impacts. We’ve seen how redshirt freshmen can improve. It will also be incredibly important to see how the three JUCO players can impact the two-deep or if they can even impact it at all. What about the two transfers? How have they progressed in the year that they’ve sat out this year?

It’s way too early for me to make many knee jerk reactions at this point, but that doesn’t mean that you can’t. I’d love to hear your initial thoughts on the 2016 season.