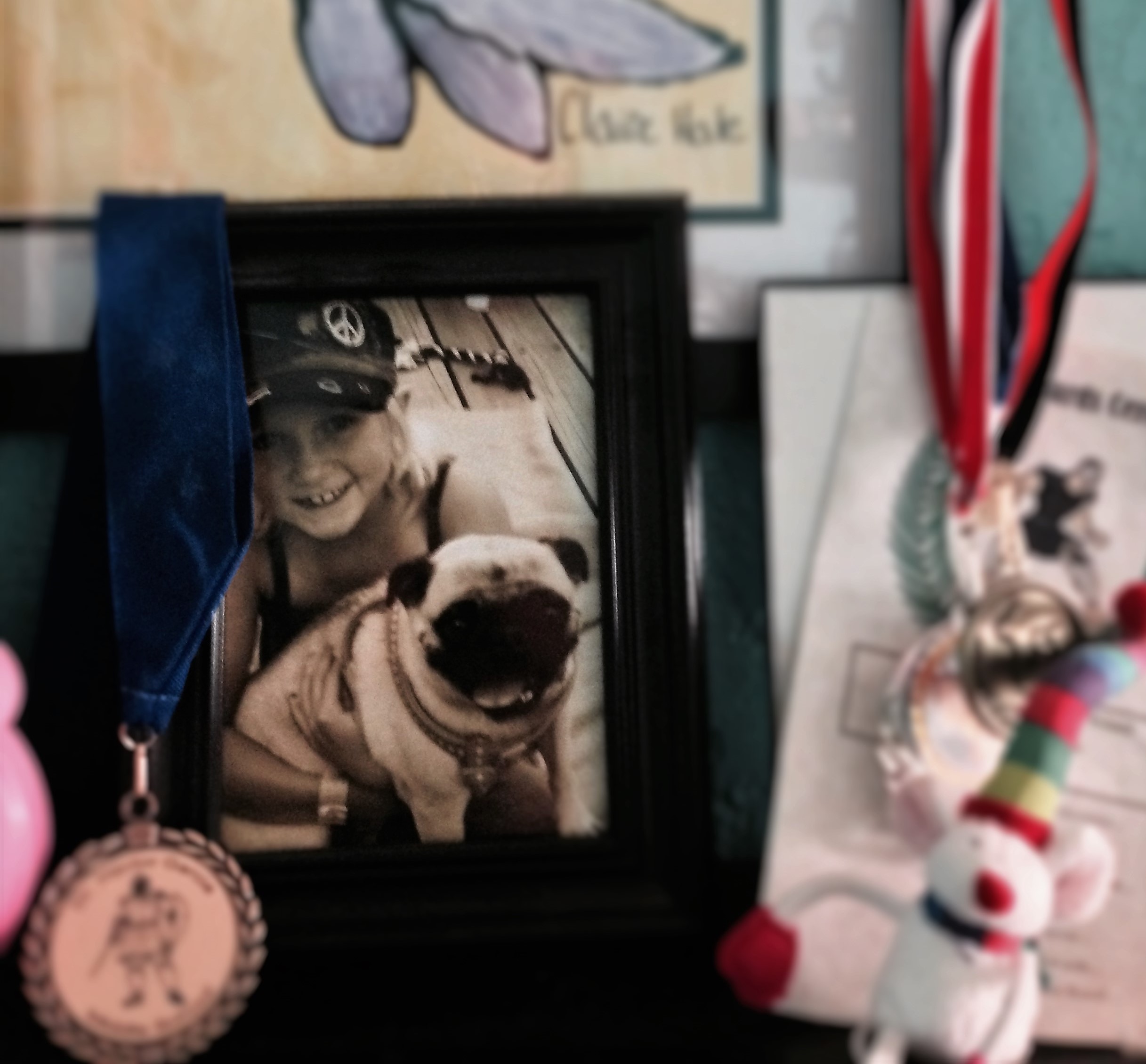 She was always a puppy, until suddenly she wasn’t anymore.

My wife and I liked to joke that we rescued Lola from a crack house. While exaggerated, the address we found in the paper ten years ago wasn’t in the best part of town. The fleas hopping onto our ankles from the grass in the yard were disturbing, but the puppies were adorable. There were three pugs left—one black and two fawns. We chose the female fawn.

We took her to get shots, bathed and checked out, then took her home. Our daughter, Claire, who was five at the time, stayed with some friends while we investigated the life-altering purchase of her first puppy. Claire came home to find her playing in the backyard. Naturally, both were overjoyed to meet. Claire, in her silent, majestic way; the puppy, bounding, leaping, licking and snorting.

The vet’s assistant came in and asked me to sign various waivers and disclosures and told me to take my time. I had no idea what to do or how to act. I told her we were ready. Lola was shaking slightly and struggling to keep her balance on the slick table. So I held onto her.

We had fun tossing around potential names that afternoon while playing in the backyard. After several suggestions (mine was Chili Bowl) my wife nailed it. “We should name her Lola Maria.” It was perfect.

Lola quickly became part of the family. Like any dog, she had her odd tendencies; often idiosyncratic habits that frustrated the orderly way my wife and I prefer. She’d slide into the wall while making the turn every night running to her kennel. She’d linger under the kitchen table, smart enough to know that our two boys had most likely dropped lots of their dinner on the rug beneath them. And I’ll never understand why she got so angry at pebbles, particularly when one of the kids would drop a handful down the slide on the play-set in the back. She’d charge the slide, yapping and growling, often swallowing several of the tiny rocks during her attack. She was equally ferocious with sprayed water, relentlessly attacking the hose or sprinkler.

On our summer visits to Ruidoso, she’d charge ahead on walks with her hot pink harness and leash, dragging Claire until she’d tire from the altitude and heat and plop down in the cool grass, refusing to move until she’d sufficiently rested. There were times when the boys were younger that one of them would have to relinquish their stroller seat to Lola so all of us could make it back to the cabin.

She was finicky too. She liked to eat baby carrots and had an uncanny knack for knowing who was in the house by the way the door opened and closed. If it was one of us, she was fine. Anyone else entering would set her on edge until she was certain that Claire wasn’t in any danger.

Her relationship with Claire was special. Sure, Lola tolerated the boys, and they have always been fond of her. In fact it’s rare that a conversation in the car doesn’t turn into one of them affirming to the other our family’s hierarchy. “First was mommy, then daddy, then sissy, then Lola, then Cade then Baby Cash,” one would insist before moving on to more important topics about how hungry and thirsty they had suddenly become. And the fear they had that Lola would swoop in and eat all of their superheroes off the carpeted floor was far fetched, but useful at the end of the night during cleanup time.

Lola tolerated my wife and me, too. There seemed to be an understanding and healthy respect between the three of us—she knew we were in charge of the food so in turn she’d listen to us when the nightly chaos of putting everyone to bed was at its peak. But it was always Claire that she was closest to.

Claire has a calmness that flows naturally. It pays off for her on the basketball court as her steely resolve influences her teammates and calms otherwise tense situations. She prefers the quiet, and Lola was anything but. Lola’s panting and snorting were constant reminders of her presence and she was never prone to sitting still. But with Claire, she would. When Claire was younger she’d often sit with Lola in the backyard, just the two of them enjoying the silence.

The vet came in with three syringes. She told me the first was to help the fluids flow. The second was a sedative that would make her sleepy and the third would stop her heart. I rubbed the top of her head and softly scratched her ears while watching as the vet carefully began injecting the fluids into the IV wrapped in yellow tape on Lola’s right leg.

Theirs was a bond that none of us will ever forget, and someday we’ll be able to look back upon fondly. But today is filled with sadness. Claire had Lola to lean on before there was anyone else; before her brothers came along; before she blossomed into the extraordinary young lady she is today.

There is a reason for the eight year age gap between Claire and her brothers—it’s because for so many years we couldn’t have another child. We went through studies and surgeries and myriad methods before finally having Cade via in vitro. Needless to say, the arrival of his little brother, Cash, just two short years later was a complete surprise.

But through it all—through the trying times in those years when we didn’t know if Claire would ever have a sibling, to now having moved so quickly to a houseful–Claire always had Lola. And Lola always had Claire.

The sedative took hold almost immediately and Lola lay down on the table. The vet slowly began the last injection, a dark pink substance that looked like liquid Children’s Tylenol. Lola stopped moving all together. The vet held a stethoscope to her chest and nodded. “Her heart has stopped beating,” she said. “Take all the time you need.”

I awkwardly stood in the room for a few minutes, petting Lola. Her once yule-log frame now so emaciated by cancer was finally able to rest. She loved to run up and down the hills behind our house, but hadn’t been able to leave her kennel for the last several weeks. She had always been a puppy, never seeming to grow out of the excitement to be around all of us; never resting as long as someone was around to pay attention to her. And now suddenly she wasn’t anymore.

After one last ear scratching, I wandered out to the parking lot, completely unsure what to do next. The vet’s assistant approached carrying Lola’s collar. Handing it to me she said, “I’m so sorry for your loss.” Through swollen, red eyes I reminded myself that it was ok. I’m not a dog person.

One night, years ago while were still struggling with the prospect of not having any more children, a more spiritual friend said something that I’ve always remembered. “Maybe Claire just needs this time alone with her mommy and daddy,” she said. Perhaps she was right.

Claire, largely on her own, but with a little help from my wife and me, has the brightest of futures ahead. Her options are limitless. Maybe in some small way those eight years made a difference. And when she was five, before all the chaos and activities that fill our schedules today, she found in the backyard the first of what is sure to be several meaningful, lifelong friends. Her name was Lola.