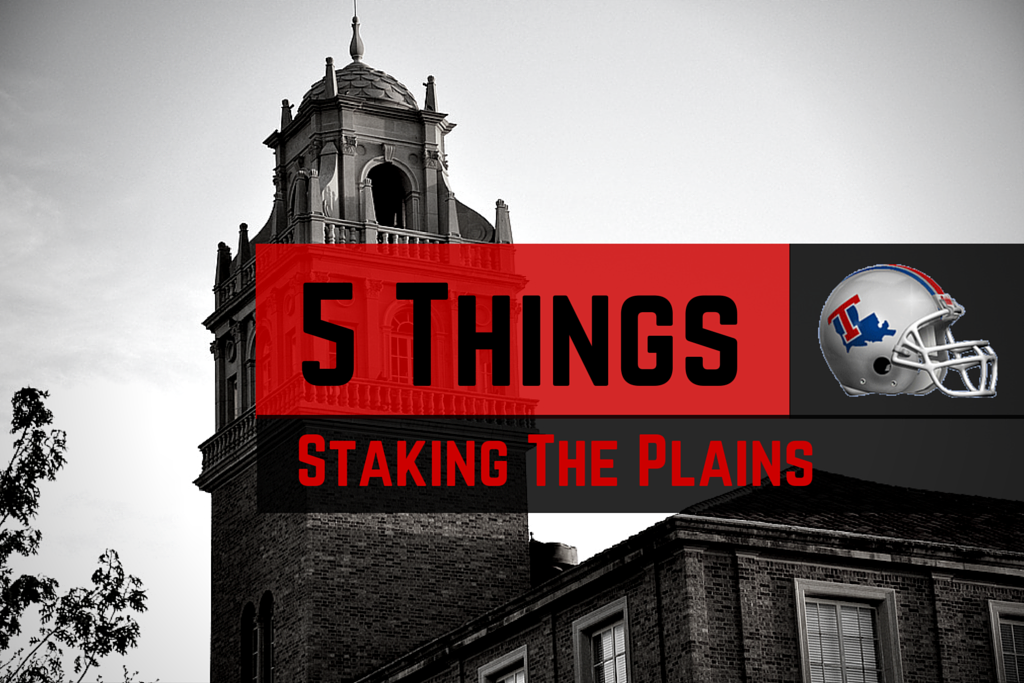 The Red Raiders return home for their third game of the year and host the Louisiana Tech Bulldogs.

Louisiana Tech will be replacing quite a bit on offense, at least the star players, namely running back Kenneth Dixon and quarterback Jeff Driskell, who helped lead Louisiana Tech to those 9 wins last year. Offensively, the Bulldogs were pretty good, finishing 21st in total offense, 80th in rushing offense and 13th in passing offense, while scoring 37.5 points a game which was good for 19th overall. Not a lot to complain about there.

The Bulldogs do return 4 of 5 on the offensive line and three of their top receivers, so it’s not a complete rebuilding job. Let’s tackle the offensive line first, as they’ll have back Darrell Brown (6-4/300), O’Shea Dugas (6-5/294), David Mahaffey (6-4/310) and Kirby Wixson (6-4/325). The only player that they have to replace along the line is tackle Jens Danielson.

At receiver, Carlos Henderson (5-11/185), Kam McKnight (6-2/217) and Tent Taylor will return at receiver and because the Bulldogs run a version of the spread, they’re bringing back three of their starting four receivers. Taylor was the leading receiver last year, while Henderson had 36 catches for 774 yards and 5 touchdowns while McKnight caught 22 passes for 268 yards last year. The fact that Taylor is only 5’8″ and caught 99 passes last year while averaging nearly 13 yards per catch tells me that you’re looking at a Jakeem Grant type of player. Will probably be on the inside and is probably explosive and can make big plays.

Throwing the ball to those receivers should be Ryan Higgins (6-2/208) a senior from Hutto, Texas, who has waited his turn to take the reins. Higgins played in 7 games last year and performed really well in the spring game, completing 27 of 34 passes for 469 yards and 5 touchdowns to go along with 2 interceptions. I don’t know how well those numbers will translate, but a senior starting quarterback who has had 4 years to figure things out has worked well for Texas Tech for years and could work the same for Louisiana Tech.

At running back to replace Dixon is Boston Scott (5-6/195), who had 34 carries for 275 yards for 8.09 yards per rush and Jarred Craft (6-0/215), who carried the ball 48 times for 230 yards and 3.97 yards per carry. As you’ll note by what these guys do carrying the ball, Scott obviously will do wonders in space, while it appears that Craft is probably more between the tackles.

If the leading receiver is playing the slot and Dixon caught 34 passes for 467 yards and 7 touchdowns, my thought is that Louisiana Tech will try to get the ball out in space, from sideline to sideline, as much as possible.

Defensively, there are a lot of pieces to replace with the only returnees being DT Aaron Brown (6-1/270), DE Deldrick Canty (6-2/250) and S Xavier Woods. So, Louisiana Tech will need to replace both cornerbacks, all three linebackers and the opposite defensive tackle and defensive end to Canty and Brown.

Defensively, Louisiana Tech was 48th in total defense, allowing 376 yards a game, which was good for 48th overall, only allowing 120 rushing yards a game, good for 13th and 257 passing yards a game, good for 99th overall. I’m sure that having a senior laden defense will do that for you, especially at so many key spots. Granted, Louisiana Tech’s Power Five opponents were against Kansas State (lost in OT), Mississippi State (lost 45-20). I should also mention that La.Tech’s defensive coordinator, Blake Baker, graduated college in 2008. Seriously, that’s young. Baker took over for Manny Diaz, who spent a year at Louisiana Tech.

If we look back at last year, 8 of the top 10 returning tacklers are all graduating. Woods is one returnee that helps, as does Jaylon Ferguson (6-5/256), who registered 35 tackles last year at defensive end to go along with 15 tackles for loss, 6.0 sacks and 8 quarterback hurries and 2 fumbles forced. That’s pretty good production from a freshman defender (I think he redshirted, but still, that’s good). DaMarion King (5-11/198) could be the other safety prospect as he was playing JUCO ball last year for Allan Hancock College. Lloyd Grogan (6-1/212) might be another option at safety and he did see time playing last year. Hawaii transfer Jarrell Jackson (6-0/175) had a pick during the spring game and he’s just a redshirt sophomore, probably sitting out last year in transferring to Louisiana Tech. Aaron Roberson (5-9/196) is most likely the other cornerback.

There’s no doubt that Louisiana Tech had a success season last year, largely because that offense was spectacular behind Driskel and Dixon and the defense was a true veteran defense, guys that played and had significant impacts. That defense is largely gone now as is Driskell and Dixon, although I’m not doubting that Higgins will get something done.

Louisiana Tech was pretty darned good in the red zone, 34th in the country and 25th in the nation in first downs with 309 total. The Bulldogs were also relatively penalty free, 41st in the nation. In this section I’ve tried to find some stats that sway me, one way or another, about a match-up I like for the other team and Louisiana Tech is somewhat middling in a way. Not great and not terrible. That’s probably what Louisiana Tech is.

Of Louisiana Tech’s 4 losses last year, they were to Western Kentucky by a field goal, 38-41, then lost to Kansas state in 3 overtimes, 33-39, lost to Mississippi State by 25, 20-45 and then lost to Southern Miss 24-58. In looking at the games they won, Souther, FIU, UL-Lafayette, UTSA, Middle Tennessee, Rice, North Texas, UTEP and Arkansas State. Not exactly power houses. Not at all saying that Louisiana Tech can’t win this game, but they had problems against teams that were even slightly better and also problems on the road.

Texas Tech is playing at home, against an unproven defense and and a team that lost their four games on the road last year. I think it could be a close game depending on how the defense plays because I do think the Louisiana Tech offense will put up some points. They like to get guys in space and play the screen game, but they’ll go downfield too.