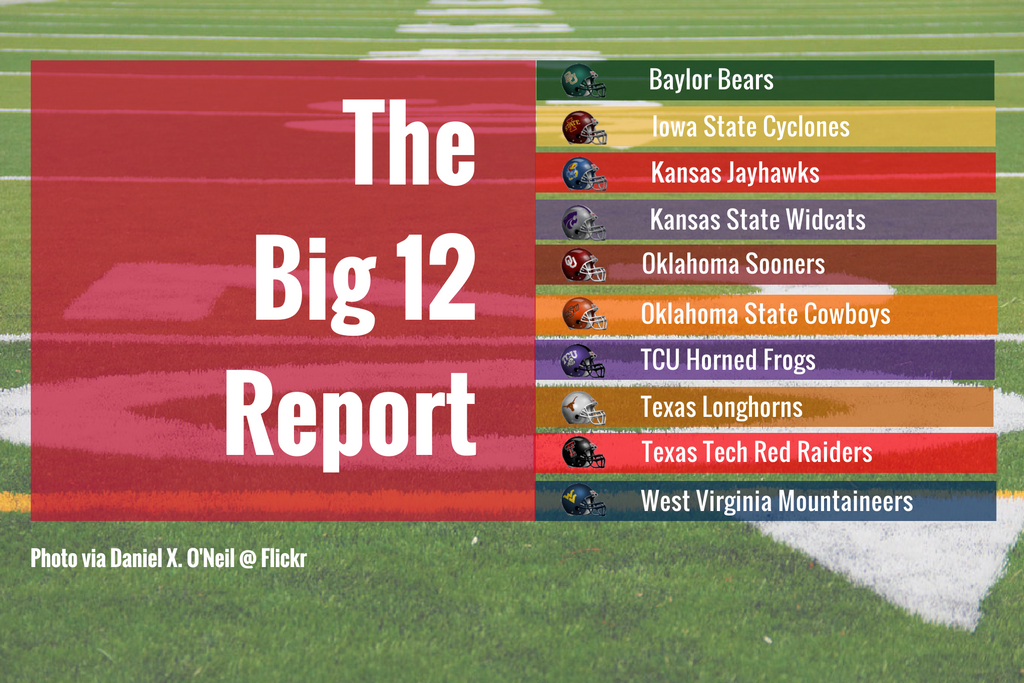 Your guide to all of the Big 12 action in week one.

Welcome! Yet another new post for you guys to consume, this one being a preview of each Big 12 game for each week. Brian and I will be working on this collectively, he’s going to be the wittier one. The info for each post will include the opponent, date, television an the most recent line. As you know, lines changes and there is a link to the OddsShark link to the game where you can check out the lines as they evolve.

Brian: After the rightfully deserved turmoil this offseason, many are curious as to how formidable the still quite talented Bears can be without Briles at the helm. However, with new head coach Jim Grobe retaining most of the staff, the drop-off may not be quite as dramatic. Seth Russell is a significantly better QB than former Grobe ward Riley Skinner, and Grobe’s defensive background more than likely means the offense will be completely under Kendall Briles’ direction. WR Ishmael Zamora was (finally) suspended for beating his dog & RB Johnny Jefferson is out indefinitely with a foot injury, but K.D. Cannon has returned to practice and should be playing, so expect to see Russell look to him plenty. As for the directional school du jour, this particular Northwestern State hails from Louisiana and plays in the Southland conference. Don’t expect this to be a great indicator of where Baylor stands coming into 2016, as typically the feistiest things to come out of Natchitoches are meat pies (look it up).

Brian: Iowa State isn’t waltzing into an easy game this Saturday at Jack Trice. The UNI Panthers are ranked 5th in the FCS Coaches Poll, and are picked to finish second in their conference behind none other than North Dakota State. Iowa State, on the other hand, will be debuting new head coach Matt Campbell, who comes to the Cyclones by way of Toledo. QB Joel Lanning will be replacing the Sam Richardson (now a GA at ISU), and should luck finding WR Allen Lazard, who will be facing a UNI defense that just sent two corners to NFL training camps. If nothing else, RB Mike Warren will look to capitalize on a stellar debut campaign from last season. Watch for the Cyclone’s pass defense (ranked 111th last season) against the 2nd year UNI QB Aaron Bailey.

Seth: I have no idea what to think here because I know so little about Rhode Island. Apparently, Kansas is still deciding between starting senior Montrell Cozart and sophomore Ryan Willis at quarterback. If it’s me, I’m starting Willis and hoping that he eventually makes the leap. He’s the better passer, but maybe not the better player. I’d watch out for WR LaQuvione Gonzalez, a TAMU transfer that is eligible this year RB Ke’aun Kinner to help carry the offensive load.

Brian: The Wildcats get the distinct pleasure of being on the receiving end of Christian McCafferey’s introduction to his Heisman campaign to start the 2016 season. However, Bill Snyder’s School of Witchcraft & Wizardry does have a few advantages over Stanford. QB Jesse Ertz will be back under center for the Wildcats, and the defense returns S Dante Barnett among many others. For all of the experience the Wildcats bring, Stanford is having to replace almost everybody, including QB Kevin Hogan. Ryan Burns is taking over at quarterback, and by this point Stanford is able to reload more than rebuild. Expect K-State to try to slow the game down, and tune in if you love watching hammer fights.

Seth: I’m torn about who to cheer for in this game. On one hand, if I cheer for Houston to win, then all we’ll hear about is Tom Herman’s grill and how Houston should join the Big 12, while if we cheer for Oklahoma, then we’ll hear about how Baker Mayfield has been disrespected his entire life and he feeds off of disrespect. Personally, I really like Oklahoma in this match-up, I think the Sooner’s defense is going to be better than most people think (they have 4-star recruits at nearly every spot) and the offense is going to be hard to beat. Greg Ward Jr. is an incredibly fun player for Houston, he’s a terrific player to watch and if you haven’t seen him before, then sit down and watch him play. He’s not an NFL quarterback, but he’s a heck of a player.

Brian: Oklahoma State joins in on the Southland Directional Derby this week by taking on Southeastern Louisiana. Mason Randolph looks to firmly assert himself as one of the top Big 12 QB’s as a junior this season, and he’ll have the distinct advantage of throwing to nightmare WR James Washington behind a veteran offensive line. Oh, and Barry Sanders, Jr. will be lining up at running back. The defense, which was a bit of a liability in the back stretch of 2015, is anchored by the linebacking corps & safeties Tre Flowers & Jordan Sterns, but the DL has to try to replace the production of Emmanuel Ogbah.

Seth: Kenny Hill gets the start at quarterback and I’d guess that TCU whallops South Dakota State. If Cumbie and Meachum can coach up Boykin, then they’ll be just fine coaching-up Hill. Hill has talent, he just let the fame of being a TAMU quarterback get to his head and participated way too much in that college life. Did you know that SDSU is in the Missouri Valley Conference? Me neither, but now you know. This will be SDSU’s lone Power Five opponent and I’d guess that TCU’s defense is going to be fan-flipping-tastic this year. DE Josh Carraway is one of my favorite players to watch when he’s not playing Texas Tech and with DE Bubba McFarland healthy after being out last year, that’s the best defensive end tandem in the Big 12.

Seth: This game has changed dramatically over the course of the last week and a half, with the arrests in South Bend and Notre Dame deciding to play two quarterbacks, I’m just not sure. I wouldn’t be surprised to see Texas play two quarterbacks as well, Tyrone Swoopes and Shane Buchelle should both see playing time. Notre Dame is a top 10 team heading down Austin-way and I expect the Fighting Irish to handle business. Still though, I think Texas is building some incredible talent on the defensive front, Malik Jefferson is a stud at linebacker and Poona Ford is going to be tough to stop on the line. The offense is trying to implement Baylor’s fast-paced and outside the hashmarks offense. Having Chris Warren and D’Onta Foreman available at running back should be tough to stop.

Brian: WVU’s Skylar Howard looks to build off of a stellar Cactus Bowl to be the Air Raid QB Dana Holgorsen really needs in his 6th season. Rushel Shell returns at RB, and will be counting on a veteran line to stand their ground against what should be a quite stout Mizzou defensive line. However, WVU faces a potential huge liability in their defensive back 7, as their stud linebackers and corners from 2015 are all gone. While the secondary will still be comprised of juniors & seniors, new Mizzou OC Josh Heupel (yes, that one) will surely be looking to test how comfortable the new starters are while also trying to break in an offense that was lackluster last season.