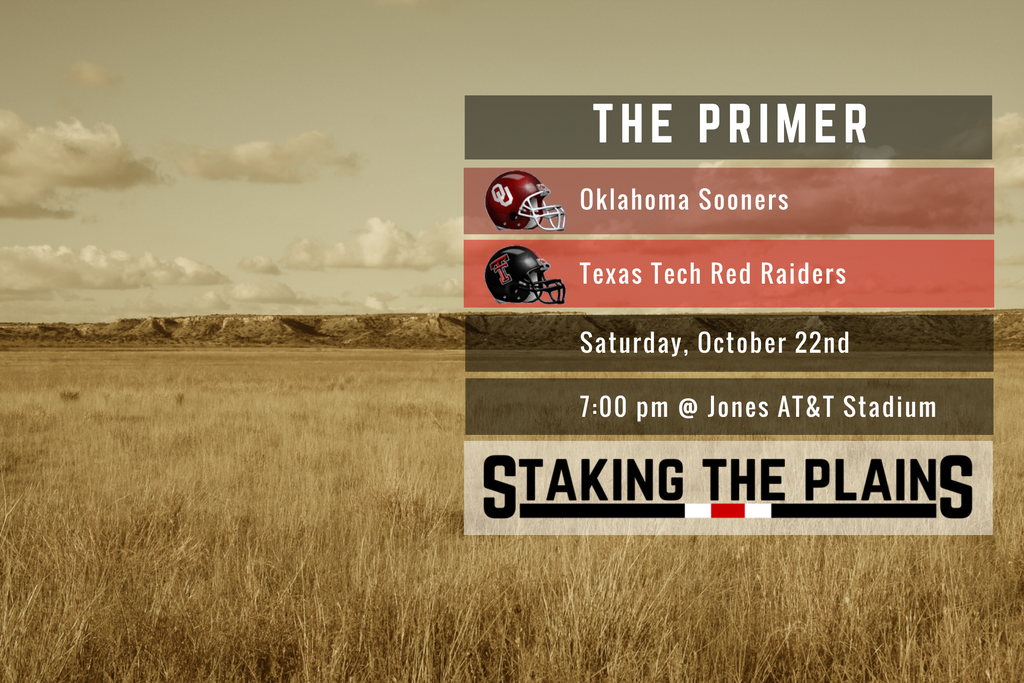 We start the week with an early look at the Oklahoma Sooners as they come to Lubbock this Saturday night.

The Sooners started off the year in a bad way, but they’re starting to exert their dominance. Two early season losses to Houston and Ohio State was troublesome, but they’ve recovered nicely with wins against TCU, Texas and the latest win against Kansas State this past weekend, winning 38-17. the TCU and Texas affairs were high scoring in nature, 52-46 over TCU and 45-40 over Texas. Texas Tech, is reeling, two straight losses to Kansas State and the latest a blowout loss to West Virginia.

1. QB Baker Mayfield (6-1/212): Mayfield has been very good after getting off to that rough start. Mayfield has completed 71% of his passes for 10 yards per attempt, which is terrific, and 16 touchdowns and 5 interceptions. When Mayfield doesn’t try to do too much then I think Mayfield and Oklahoma are better and really tough to beat offensively.

2. RB Joe Mixon (6-1/226): With Samaje Perine possibly out with some sort of hamstring injury, it might be the Joe Mixon show as he’s already run for 476 yards on 79 carries for about 6 yards a carry. We talk a lot about the bruising nature of Perine, but Mixon is 226 himself and he’s faster than Perine. He’s a heck of a runner.

3. LB Jordan Evans (6-2/233): Evans has 47 tackles on the year thus far, averaging nearly 8 tackles a game. Evans also has 5.5 tackles for a loss and just half a sack, but also has 2 passes broken up and 2 quarterback hurries. Evans is the leading tackler and I’d imagine that he is a very active player for the Sooners.

4. LB Ogbonnia Okoronkwo (6-2/245): All three linebackers lead the team in tackles, Okoronkwo is third on the team in tackles, but he also has 7.5 tackles and 6 sacks thus far along with 4 quarterback hurries and a pass broken up and a forced fumble. I’m thinking that Okoronkwo will be the edge rusher and will be very well acclimated with Terence Steele and Madison Akamnonu for the better part of the game.

Via OddsShark, has the Sooners favored by 13 at the opening line and has already creeped up to 13.5 and it wouldn’t be surprised to see that line increase as the week moves on. I’m going to ruin the surprise, but I’m not going to be taking Texas Tech unless spread gets ridiculous.