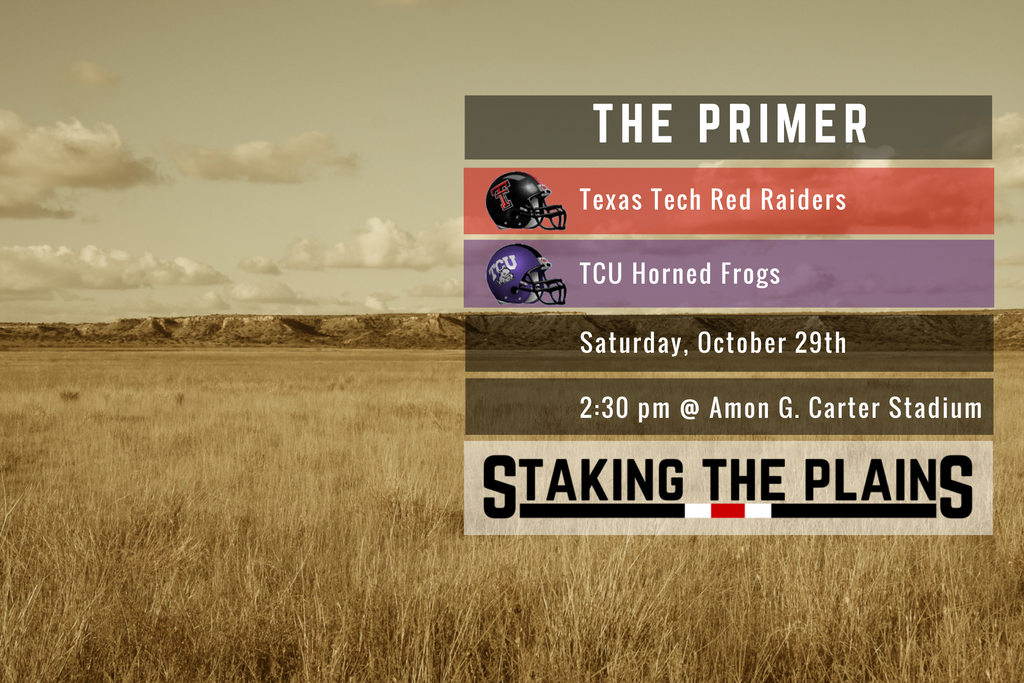 Your introduction to this week’s game.

TCU met the same buzzsaw that Texas Tech met two weeks ago, WVU, where the Horned Frogs also only mustered 10 points against the West Virginia defense. TCU is 2-2 in the Big 12 thus far, with wins over Kansas and Iowa State and losses to Oklahoma and the aforementioned WVU. The two non-conference wins are against SMU and South Dakota State.

1. QB Kenny Hill (6-1/205): Hill has completed 63% of his passes for 2,142 yards with 12 touchdowns and 8 interception, so Hill hasn’t been great and I guess you could argue that Hill has been good, but even that may be debatable among TCU fans. Hill is the second leading rusher and that’s somewhat of a game-changer as he has run for 271 yards and is tied for the team with 7 touchdowns. Hill averages over 6 yards a carry.

2. RB Kyle Hicks (5-10/210): I had never really heard of Hicks, but those measurables are problematic, and the fact that Hicks is a running back. Hicks leads the team with 479 yards on just 87 carries for 5.5 yards per carry and Hicks also has 7 touchdowns. The scary part is that Hicks is the second leading receiver with 27 catches for 308 yards and 2 touchdowns.

3. LB Ty Summers (6-2/235): Summers leads the team with 46.5 tackles on the year and has 3 tackles for a loss and 2 pass breakups. Summers accounts for 12.4% of TCU’s tackles and make no mistake, both of TCU’s linebackers are both very good. Travin Howard is the second leading tackler at 42.5 tackles a game and that’s the backbone of the TCU defense. As always.

Via OddsShark, TCU opened as 8.5 favorites and the line has already dropped to 7.5, which is interesting. I do wonder how good TCU really is and I wonder about their defense. I just don’t have a good handle on the Horned Frogs as I see them being similar to Texas Tech in ways, but without the better offense, but a better defense.