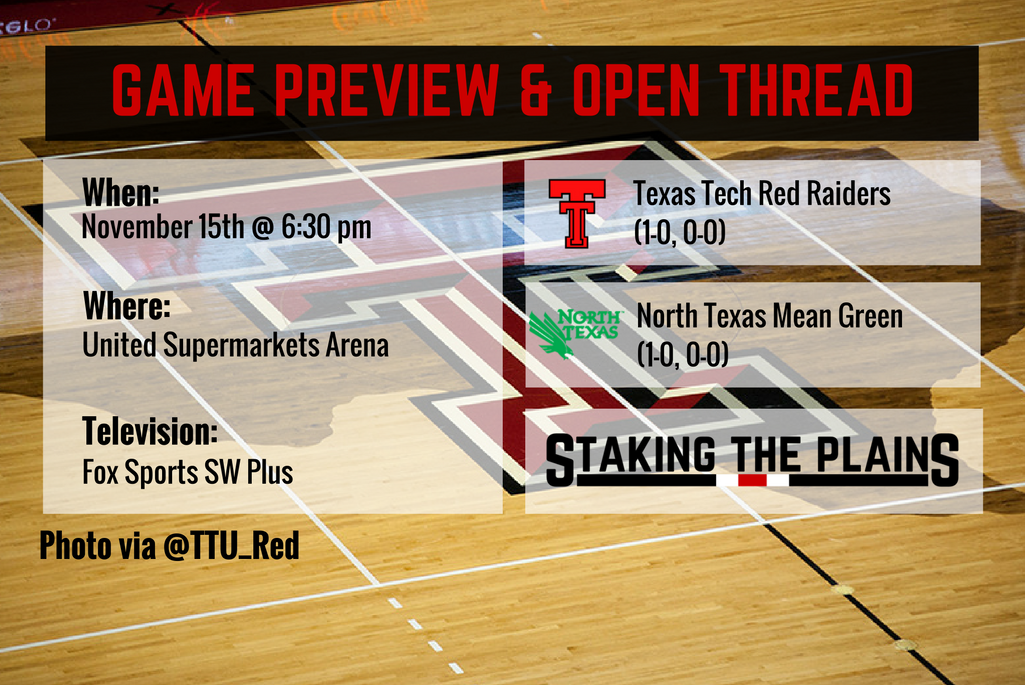 1. KenPom has Texas Tech as the 45th best team in the nation, right between Creighton and California. The Red Raiders are 45th in AdjO and 33rd in AdjD. The Mean Green are 242nd overall, 248th in AdjO and 249th in AdjD. So, Texas Tech is still finding their footing a bit, but North Texas is struggling a bit.

2. North Texas defeated Sul Ross in their first game of the year and beat them by 9. Sul Ross isn’t exactly highly ranked either and Sul Ross is Division III. Texas Tech used to play North Texas and truly struggle with he Mean Green, but Johnny Jones moved on to LSU and UNT hasn’t really recovered.

3. Not getting to see the first game for Texas Tech, it seemed as if Texas Tech started out slowly, on both offense and defense. Didn’t put Houston Baptist away early and the Huskies seemed to keep pace in the first half. But by the time the second half rolled around, I think the depth really ran down the Huskies.

4. For those of you who don’t know, Norense Odiase injured his foot/ankle, maybe even broke it, and it’s the different foot than last year. So Odiase will be out for a few weeks. I’m not sure as to his return and it will be interesting to see how Beard handles injuries and how giving he will be with information.

5. I think Texas Tech should roll sufficiently here and it shouldn’t be that close of a game for any reason. Although there is one big Texas Tech connection in that North Texas head coach Tony Benford played at Texas Tech and the Denton Record Chronicle’s Brett Vitto talked to Benford about playing Texas Tech:

“We are looking forward to the challenge of playing an NCAA tournament team,” Benford said. “They are well coached and have a lot of depth. They could be the best team we play all year. They play hard, defend you and can score. They will be a contender in the Big 12.”