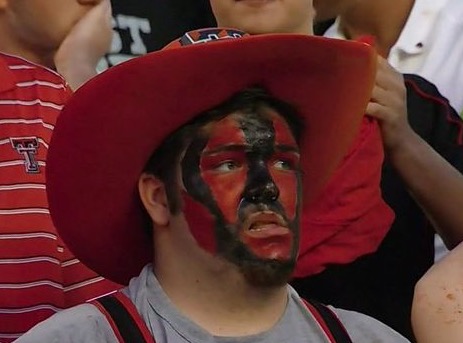 There just aren’t words for what happened today. Here I was defending this team, fighting in all of these games, thinking we had seen the worst of it all when West Virginia came to Lubbock. Nope. Somehow they got worse.

Texas Tech was down by 42 points at half to a then 2-8 Iowa State. Tech was never able to cut into that lead. It eventually got up to 56. This is going to go up there with the 66-6 drubbing by Oklahoma State

Mahomes wrecked his nonthrowing shoulder on a run play where he lowered a shoulder to pick up a couple of meaningless yards. Mahomes might not be Pro/NFL ready right now, but I really don’t see a reason for him to return to Texas Tech next season. What we thought we saw in terms of progress was completely wiped out in a matter of an afternoon. He’s projecting the wrong direction, and any further time at Tech will seriously hurt his future.

I seriously doubt Kingsbury would be coming back next season if it wasn’t for the extension he signed in the off season. And it’s going to be several years until we can see if that contract extension was a good move or set the program back that much further. As an athletic director, it would be hard for me not to leave Kingsbury in Ames tonight. He sold people on this team being the most talented he’s had, and yet it’s been the worst performing team, in decades. He either knew he had a shit team and lied, or is a shit evaluator of talent. Take your pick of which is worse. I know which it is for me. We just saw a 4th year Kingsbury out coached by a 1st year Campbell.

At least there’s basketball and baseball.